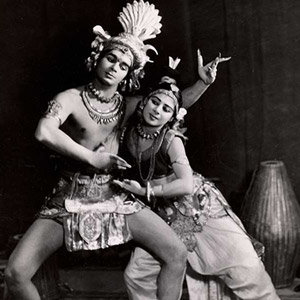 This year marks the 50th anniversary of the momentous Civil Rights Act, which ended racial segregation and banned discrimination. That decade also saw the passage of the 1965 Immigration Act, which relaxed quotas and led to growing migration from India. And on the cultural front, Indian influences that began in the pre-’60s era began to make a greater impact.

The 1960s brought an awareness of things Eastern into the forefront of American popular artistic consciousness through the work of hugely popular bands and musicians, most notably the Beatles and Ravi Shankar. Even if seen as a foreign and exotic dream in the popular imagination, South Asia has had a steady presence in the American arts and entertainment world for many decades prior to the 1960s. American Jazz musicians had been consciously exposing themselves to Eastern ideas, both musical and philosophical, from the East as well as from Europe, apart from local interpretations of the “Orient,” as evident in Tommy Dorsey’s arrangement of “Song of India,” John Coltrane’s modal explorations, and the Eastern sounds embraced by Yusef Lateef. In 1955, Ustad Ali Akbar Khan became the first South Asian musician to be featured on a television show, on Alistair Cooke’s Omnibus. Going further back, there were many instances of cultural meetings that cast their influence upon the evolutionary directions of the arts as well as popular entertainment.

The first group of entertainers from the subcontinent to reach the shores of America was a troupe of “Nautch Dancers and Jugglers, a Party of Wonder-Workers,” as noted in a New York Times report from November 21, 1880. The group comprised five women “Nautch” dancers, and ten men who were musicians, jugglers, and snake charmers. The show was the brainchild of Augustin Daly, an American theatrical producer and playwright active in the U.S. and the U.K.

The Nautch party appears to have captured the imagination of the public and the instincts of showmen for many decades thereafter. P.T. Barnum staged a grand show in the Madison Square Garden, New York, on March 15, 1884, for which he “procured a number of additional ethnological specimens for exhibition in my ‘Grand Congress of the Nations.’” The “specimens” included “Afghans, Hindus, and Singing and Dancing Nautch Girls of India.” Nautch groups appeared at various venues with their glittering exotica, from recreating the “Durbar of Delhi” at Coney Island, New York, in 1904 to being featured in the “Mysterious Asia” pavilion at the 1904 World’s Fair in St. Louis, Missouri. 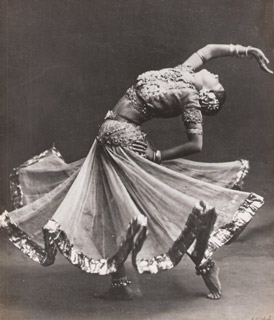 An important outcome of the appearance of these groups on the history of American performing arts was the impression they made on Ruth St. Denis, considered among the creators of American Modern Dance. St. Denis was a self-made dancer, a consummate entertainer with an artist’s instincts. She created her own form of dance, drawing from her deep attraction to Eastern imagery, her contact with and immersion into the world of Nautch practitioners in Coney Island, her studies of Indian writings and her formative experiences as a skirt-dancer and later as soloist on vaudeville stages. From 1906 onwards, she created and staged productions with strong Eastern imagery and with forms drawing from vaudeville structures—Incense, The Cobras, and The Yogi, culminating in the major production Radha, with concepts that went on to influence and inspire generations of performers in the U.S.

After 1911, Ruth St. Denis’s career saw a dip due to the public’s waning interest in solo performances, and the arrival of Ragtime music and dance. The “Orient” in artistic expression moved into private spaces of wealthy individuals, with society ladies taking up the fad to become the new “classic” dancers at costume balls and private performances where artists were paid to perform alongside dilettantes. Cross-country tours by St. Denis also influenced a generation of amateur dancers in smaller communities. St. Denis struggled on with her tours of smaller cities, performing East Indian, Egyptian, and Japanese pieces interspersed with popular numbers danced by other company members including her future partner, husband, and manager Ted Shawn.

St. Denis and Shawn went on to found Denishawn in Los Angeles in 1915. They continued producing shows based on Eastern imagery, fueled by their encounters with the writings of Ananda Coomaraswamy (The Dance of Shiva, 1918), the Sri Lankan philosopher who was then active in artistic circles on the East coast, and Orientalist literature du jour. Denishawn became a center for girls from both middle American and well-to-do families to train in dance and aesthetics. The girls got to be part of pageants produced to feature Eastern themes, such as “daily life on the Ganges,” a widow’s rite of Sati, Nautch and snake-charming sequences, and a grand finale of Nirvana. The students found many performing opportunities in low-priced vaudeville and also significantly in the film industry that had taken root in Los Angeles by the teens. Some illustrious students such as Martha Graham went on to new heights in art dance. 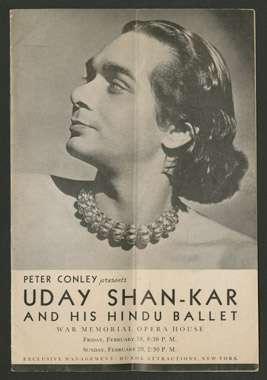 By the 1920s, vaudeville had opened up to aesthetic dance, driven by the public demand. Art dance and theater continued to be enamored by themes from South Asia, with productions such as The Garden of Kama, The Flute of Krishna, and interpretations of the ancient Sanskrit play The Little Clay Cart. The 1930s brought to America, for the first time, celebrated Indian dancers Ram Gopal and Uday Shankar (Ravi Shankar’s elder brother) with their troupes. They presented traditional styles as well as new fusions such as Shankar’s “Hindu ballet.”

Ragini Devi, a Midwestern American woman (born Esther Sherman), was a key figure in bringing traditional Indian dance to the American public, apart from her pioneering artistic and ethnographic work in India. She wrote Nrityanjali, one of the first books to introduce traditional dance forms to the American reader, in 1928, and established the India Dance Theatre in New York City in the late ’30s. 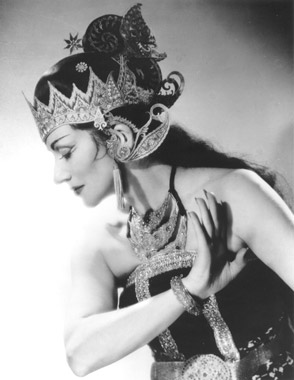 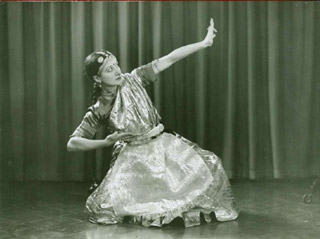 Bharatanatyam performance by La Meri (above).
(Right) La Meri in a Javanese costume.

La Meri was another dance pioneer of ethnic dance, with roots in vaudeville, Broadway, and the silent screen, who also studied South Asian dance forms. Among her works on the American stage is a Bharatanatyam interpretation of Swan Lake. She went on to establish the New York School of Natya and was instrumental in bringing Ram Gopal to the U.S. 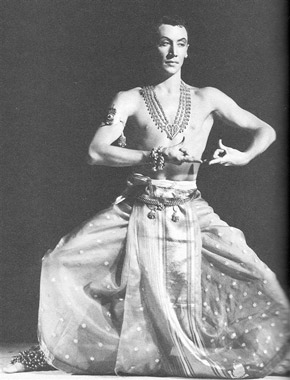 During the 1930s through the ’50s, one comes across names such as Copsey and Ayers, Beatrice Kraft, Satira, Chandra Kaly, Princess Nyoka, Sujata and Ashoka, and, of course, Jack Cole performing at prominent nightclubs like Chez Paree and Music Bowl in Chicago and the Roxy and Zanzibar, New York City.

Chandra Kaly, of Indian heritage, had studied ballet in Paris and in India with Uday Shankar. He debuted his troupe of “East Indian” dancers in 1939 in the U.S. and had a successful run with them for quite a few years. Judging from show reviews, he was well received and appeared on the bill with names such as the Jack Cole dancers at venues in Harlem.

Jack Cole was a prominent dancer and Hollywood choreographer who was a Denishawn product and had studied with La Meri and Uday Shankar. He fused his Eastern influences and his studies of Bharatanatyam and other Indian forms with Jazz dance to create a high-energy popular form called the Hindu Swing. He appeared regularly with his dancers on vaudeville stages and also on screen. Hollywood films had been presenting stories set in the colonial-era subcontinent (for example, The Lives of a Bengal Lancer in 1935, Gunga Din in 1939, The Rains Came in 1939) and Jack Cole provided choreography and dance direction for those films with “Oriental” subject matter. A notable example is the 1955 film Kismet (a remake of a 1944 film of the same name), where his Hindu Swing choreography is distinctly visible in dance sequences.

Reprinted with permission from Tides, the online magazine of the South Asian American Digital Archive (http://www.saadigitalarchive.org).
Satya Gummuluri is a vocalist/composer/lyricist. Originally from Bombay, she has performed and recorded with various music groups and has appeared at the Chicago Jazz and World Music Festivals and Austin’s SXSW, among other venues.