Education: A is for App 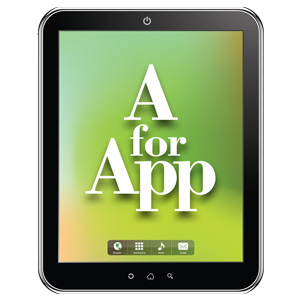 Many parents may feel that the world of crayons, paper and pencil, block puzzles, and picture books they’d loved as children is becoming outdated in the age of apps. So is it “hello iPad, goodbye iPen” now, given the wide use of touch screens—and is that a good thing? Or is the gadget mania more complicated?

Saira’s four-year-old had absolutely no interest in floor puzzles. The harried mother—a huge Sudoku and crosswords fan, a Lego enthusiast, and a puzzle junkie— had tried every other trick in the book to get her son Avan interested in basic puzzles. “As children, our favorite pastime was getting all the cousins together to build one big, giant jigsaw puzzle. I got all sorts of puzzles for Avan—the big, chunky block puzzles, to the ones that made sounds and had lights, to his favorite characters. He just wouldn’t get it! I think he was deliberately trying to test my patience,” says the 32-year-old New Jersey homemaker, with a laugh.

Then, on a play date, Avan chanced on an app on his buddy Zeeshan’s iPad. “There was an app called LunchBox which has this adorable monkey who has to pack his lunch with some fruits which are in the form of the puzzle. Avan just looked at it being played once and there he was dragging pieces of the puzzle to make the perfect fruit!” says Saira. After that, the tot couldn’t get enough of huge puzzles of cityscapes (with some help of course) and even foam and cardboard ones that his mom keeps in their car for long journeys.

TAKING TO TECH
There are apps that can help children draw, make music, play, read stories, and learn math. Some parents have propelled themselves headlong into this New World, and are educating themselves about the huge array of apps that developers are coming up with every day.

“It’s an inescapable phenomenon—everywhere you look, there are apps catering to the youngest of the young. From those promoting finger painting to feeding cuddly monsters with ‘delicious’ alphabets and numbers, it’s an easy and fun way to teach and learn. I end up having more fun than my four-year-old sometimes,” says Kamya Krishnan. The go-to favorite of the Krishnan household? A fun online reading app that has a vast collection of books from authors from all over world and a sizeable number from India. “Some of the stories, like Siri’s Smile, have Indian characters in them and after we came back from our son’s first trip to Bangalore, we were browsing through this app called MeMe Tales and my son Kush by himself pointed to the story and said that the main character looked like a cousin and that he wanted to read it!” says Krishnan.

The brains behind the popular reading app MeMe Tales is a young mother of two who, in her own words, is passionate making an impact at the intersection of education and technology. “My goal with MeMeTales was to create an open platform for creating and sharing of children’s stories. When I had my kids, I really wanted to write and share some stories with them. There was no other way to do that other than trying to get published. As my own kids started to read and use devices, I got more interested in making an impact on the way kids use technology to learn. With that, we started to focus more on inspiring parents and kids, giving them resources and helping them help their kids learn,” says Bay area mom Maya Bisineer, who worked in the corporate world for many years before making the leap into a tech startup. The MeMeTales website has several timely and contextual resources for parents.

LEARNING DIFFERENTLY
A recent study from the Pew Research Center’s Internet and American Life Project found that more than 40 percent of students or teachers use some sort of tablet in their Advanced Placement and National Writing Project classrooms.

Some educators are not so excited about the prevalence of technology as teaching aids in schools. They are concerned that these devices keep young children from developing social skills. “A child should be exposed to various sensory experiences. He needs to increase his ability to pay attention to things, learn to classify things of different gradations. I feel that too much time with technology inhibits that. We urge parents to give them exposure to reality—take them to concerts, museums, the park, have them play in the mud ...,” says Gail Pruit Hall, Educational Director at Northwoods Montessori in Atlanta.

Some parents have their reservations about apps but are at a stage where they feel that their children, being born into a digital age, can’t really escape its effect on their daily lives as young learners. “I don’t think it is critical for children to be tech savvy, but it is good for them to be exposed to visual and interactive learning systems, because it is attractive and grabs all their senses and makes them want to go deeper, to understand what is happening on a flickering screen that is not human-like but can talk, act, and make them smile or emote in some other way,” says Ranjini Debnath, a Chicago mom who wouldn’t trade her time with daughter Mona at the local library where they spend endless hours picking out books and playing board games every week.

Parents believe that work and play go hand in hand and it really doesn’t matter as long as their child reads and takes an interest in reading and learning. Achal Bhatt is a happy mom whose two young sons—11-year-old Akash and eight-year-old Neel—are learning and thriving with technology. “They have had an interactive smartboard in their classrooms for a long time. They seem to be more intrigued and involved in learning because it’s much more attractive than books and pen and paper. Essentially, it’s really the same thing—they are using their smart pens to write on these boards and it just makes the entire experience more interesting and definitely fun,” she says. And has it made a difference to how much they are learning? “Well, my older one knows his way about computers and gadgets and it comes to him so naturally. If my husband or I are in a jam with our laptops or other electronics at home, he knows how to fix things most times. That’s a lot compared to what we learnt and knew when we were children,” says Bhatt.

Bisineer agrees. “Kids today are born into a digital world. They experience and explore digital devices before the age of one in most cases. Parents have access to thousands of apps on tablets and phones that are incredibly easy to navigate. There is pretty much an app for anything you can think of. So definitely, technology has become an integral part of the way kids learn. Also there are added benefits—technology is perfect for language learning, learning on the go, and amazing for special needs learning. The right apps are so much better than passively watching television,” she says.

A WHOLE NEW WORLD
Recently, Amplify, a part of Rupert Murdoch’s News Corp, announced the launch of its $300 Android tablet that will be used to teach in schools. Loaded with custom software, the product comes equipped with resources written by former schoolteachers. The default home page offers a grid of app icons, but it also displays student information and lists “notebooks” that deliver quick access to different subjects and give teachers direct links to materials for their classes, categorized not just by subject, but also by period. What’s more, if your kid is playing truant in class, the smart pad tells them to look at their teacher and pay attention!

As Bisineer says, with there being an app for everything and parents and now educators, too, leaning towards a digitally enhanced world, it is maybe time to shake off the last shreds of uneasiness that some of us parents feel when our little one suddenly seems deaf to our repeated requests to look at his dinner. So if your tot announces from his booster seat, “Mom, history is fun!” it’s probably because he’s hooked on to Ansel & Clair’s Paul Revere’s Ride app or is merely keeping in step with the times when he says that he’d like to “swipe through” a book (duh...e-book).

“We do indeed live in a world of pods and pads,” says Pruit Hall, laughing. “But we do believe in the Montessori way of learning and since our children do get their share of technology at home, we keep it to a bare minimum in our classrooms. I think it’s a fair balance.”

So would it be too dramatic to say that pen and paper are dead? Will our children’s faces light up only in the soft glow of a Sony Xperia?

“I personally wouldn’t force-feed my child a stipulated amount of technology-related access. I am not about to trade our book reading sessions for an eBook reader or an app that Mona can have access to 24/7. And I am an advocate of cursive writing, so no writing apps and all that! That said, I like a fair mix of the old and new and I ensure she gets both in suitable quantities,” says Debnath.

“Technology has not and should not change the fact that kids need to go out and play to really grow. Nothing replaces the real tactile experiences. That is the reason why, at MeMeTales, we focus so much on inspiring parents to engage in offline activities such as crafts and play along with reading on the app and website. Technology gives us so many choices but also puts the onus on us as parents and technology companies to be responsible. I see apps as an enhanced learning opportunity, not a replacement at all,” says Bisineer.

For now it seems like Nook and Kobo are all set to coexist peacefully with Eric Carle and Dr. Seuss on our bookshelves.

Baisakhi Roy is a Toronto-based writer and editor, not to mention the mother of four-year-old Ayumi.

TOP APPS FOR CHILDREN (according to TeachersWithApps.com):
• iTooch Middle School has more than 10,000 exercises in reading and math.
• LetterSchool is touted as one of the best handwriting apps ever.
• TenseBuilder, as the name suggests, teaches tenses that may sometimes be complicated for some kids.
• Reading Raven is phonics-based, and claims to take children all the way from learning foundational prereading and reading skills to reading sentences and very short stories.