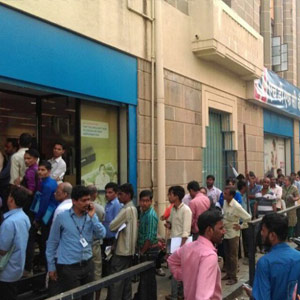 (Left) Long lines at banks have become a widespread phenomenon as India takes on the massive project of eliminating 500- and 1000-rupee notes from its currency. (Photo: localpress.co.in)

The nation has been enduring the disruption, drama, and anxiety brought on by PM Modi’s surgical strike on Black Money—the demonetization of 500- and 1000-rupee notes. Even as economists, financial whiz-kids, and opposition party politicians take turns to praise and critique this ongoing national exercise, here’s a bird’s-eye view of what’s happening on the ground.

When demonetization of 500- and 1000-rupee notes was being announced by Prime Minister Narendra Modi, I was watching the U.S. presidential election on CNN. But soon enough, reality caught up with me. When you can’t use the two most frequently used bank notes, you are up a creek, no doubt about it. I survived the initial shock thanks to the tiny stash of hundredrupee notes and smaller denominations lying at home.

Ever since, a lot of strange things are happening out there. News media, especially foreign TV outlets, are reporting economic chaos, public anger and drastic cuts in earnings. Here is the picture on the ground.

It’s widely known that only 3% of the Indian population pays taxes—the lakhs of middle men who should be paying taxes remain ‘invisible.’ These are the folks who make gazillions both out of the producer and the end-user, but do not have a real job. No kirana or local grocery shop gives you a bill: all the transactions are off the record. And most jewelers and large businesses have two bill books—the ‘real’ one for themselves and the other for the tax men. If you choose to buy an article without the bill, you get a hefty discount. This ‘shadow economy’—everybody knows it but nobody openly acknowledges it—is going to be hardest hit by demonetization.

Is there pain? Yes—and those hurting the most are people who have the least. Daily wage earners cannot find work, farmers and poor people who have no bank accounts are suddenly finding themselves without any money even to buy food. There are long lines for exchanging money, and quite a few people have died while standing in the lines. However, there is another side to this story, too.

I have stood in two queues—once at an ATM for one and a half hours to withdraw Rs. 1000, and at a bank for two hours to deposit the banned notes we had at home into our account. I expected to hear a lot of angry rants, because it was the middle of a working day with the noonday sun beating down. But there was no bitterness in these lines, only a little good-natured grouching. Senior citizens were also being given preference.

So, where are the angry crowds, outrage, and anarchy? “Only in your imagination,” would be the reply of most Indians to the protesters and gawkers alike. In fact, most of the small fry—those who don’t own black money—are extremely happy that those who were hoarding cash are now sitting on vast piles of useless paper or trying desperately to stash it in legitimate accounts.

There are others who are simply trying to get rid of their note bundles. In Bareilly (U.P.) large quantities of burnt currency were found. In Mirzapur (U.P.) boatmen found heaps of torn 1000-rupee notes floating on the Ganga. Similarly in Pune, a sweeper found 52 1000-rupee notes in the garbage. In Agartala, police recovered Rs. 3 crore in torn demonetized notes from a drain. In Naxalite-infested areas, caches of notes are being found buried in the forests (is that why they are called ‘reserve’ forests?).

Meanwhile, all kinds of ‘Just-do-it’ schemes are springing up. People are dividing up their cash and depositing them in their domestic helps’ bank accounts. Accounts set up through the Jan Dhan Yojana scheme (aimed at bringing in the poor and underprivileged into the banking system) over the last year, which hadn’t seen any deposits at all, are now brimming over with laundered money. In rural bank branches along the India-Bangladesh border, deposits worth crores of rupees are flooding in, like the Rs. 1.5 lakh deposited by a bidi worker and daily wage earner.

Since only Rs. 2.5 lakh can be deposited without attracting Income Tax enquiries, people with money to stash are exploring every avenue to wriggle out of this dilemma. Family connections are being tapped to good use—the larger the family the better, because more money can be deposited in multiple accounts. Some go beyond families. One man reported that the father of his son’s classmate approached him with a request to ‘temporarily’ park that amount in his account. Those with farming income are being asked to ‘keep’ larger sums because farming income is not taxable, and therefore large inflows of cash will not be questioned.

Even bankers are being approached for illegal deposits. One bank manager was shocked by the offer of a commission from a perfectly nondescript individual who wanted to deposit Rs. 70 crore in demonetized notes. Another man threatened to rough up a bank official when he refused to accept a deposit of Rs. 26 lakhs in questionable cash.

Food joints, gyms, and salons are offering to take old cash to attract customers. And the world’s oldest profession has seen some strange developments in its business. In Sonagachi in Kolkata, the world’s largest red-light district, sex workers who accept large denominations are finding themselves overwhelmed with customers, while those who charge less than Rs. 500 are finding themselves without work.

And then there is … gold. Many jewelry stores apparently stayed open practically through the night on November 8, with about 250 kg of gold being sold with back-dated bills. Some were charging around Rs. 40,000 for 10 gms of gold, even though the market rate was only Rs. 30,000. They closed only when they heard that Income Tax officials were on the prowl. On the other hand, in some places, people are buying any gold that is available, at inflated rates of up to Rs. 45,000 for 10 grams, the only caveat being that the payment is in old notes. These people are soliciting housewives for their gold, as housewives face less scrutiny from IT officials.

In God we trust … and in His coffers, we dump. Yes, many temples and trusts have become exchange centers. While many people have dumped stacks of useless currency in the collection boxes in the hopes that the Lord may not have heard about the demonetization, many others are making deals with temple management authorities—“we’ll ‘donate anonymously’ now, please return later minus commission.”

There have been other interesting fallouts. Stone-pelting has ceased in Jammu and Kashmir, as payments, typically 500-rupee notes, cannot be made to ‘professional’ rabble-rousers. Naxal operations in eastern states are stalled, probably due to cash flow problems. Interestingly, women who have been stashing money away unbeknownst to their husbands are having to either deposit this money on the sly, or come out in the open.

It’s common knowledge in India that most of the ‘black money’ resides in real estate deals. The honest are happy that the money people made illegally out of these deals is now useless. And then there are doctors who make tons of money through unbilled fees from their clinics or by prescribing expensive treatments and testing at diagnostic labs where they receive 10% per test per customer. Reddit users in India are chuckling about how most doctors are crying, too.

The only people in India who are really protesting demonetization are the politicians. It’s anybody’s guess how badly they’ve been hit.

Petty criminals are facing tough times. Some robbers in Bihar stole a guy’s wallet only to find useless 500 rupee notes in it. They returned it to him—and then slapped him for not having 100-rupee notes.

Welcome to the real India!