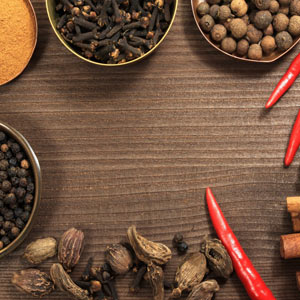 Vrisha squinted at her grandmother’s faded recipe card. Something had gone wrong. Peering beneath the lid of a heavy crockery pot, she frowned. The chicken tamarind curry had become a congealed mess. One whiff confirmed that it was beyond salvaging. Vrisha flung the pot into the sink, scowling as it hissed at her. Her husband glanced up from his iPad.

“It burned,” she said tersely.

Vrisha slapped the recipe card down onto his iPad.

Yash cleared his throat, “Step one, take some tamarind paste.”

“Whose handful? Mine? Hers? She had tiny hands,” said Vrisha, thrusting her palms out. “I have man hands.”

“I love your hands.”

“They’re not suited to Indian cooking.”

“Then don’t make Indian food! I can live on pasta forever.”

Vrisha glared at him. “I don’t understand what Ba was thinking when she wrote this. There’s nothing uniform about a ‘hand’ or ‘some.’ She said this was the exact recipe her mother gave her. There’s no measurements!”

“Maybe cooking without measurements is like a sixth sense only moms have,” he said. But as soon as the words came out, he grimaced and tried to grab her hand. Vrisha pulled away. “I didn’t mean—”

“It’s fine,” she muttered, her throat tight, “At least it explains why I can’t cook.”

They faced each other awkwardly, the fallen index card sitting between them. Vrisha turned towards the kitchen where cleaved onions, hollow garlic hulls, and wreathes of cilantro lay scattered across the counter like war casualties.

“I’ll take care of the kitchen,” Yash offered, “Just clean up and relax, ok? I’ve got this.”

She squeezed his hand, “Thanks.”

Peeling off her clothes, Vrisha stood under the scalding water until her fingers wrinkled and her toes reddened. Gingerly, she moved her hand across her taut stomach and tapped her pelvic bones. For a moment, she imagined a hollow sound echoing from the chambers of her body. She heard her viscera reverberating, jostling against each other in all the hollow spaces left between organs.

“Did the shower help?” asked Yash when she climbed into bed.

She nodded, “Somewhat. I feel better.”

“No,” she corrected, “Better is better. Being in purgatory instead of hell is better. But it’s not good.”

“Right,” said Yash before clearing his throat, “…I noticed you didn’t eat anything tonight. I saved you some takeout in case you’re hungry?”

Yash stared at her.

“You’re not hungry at all? You barely ate all day.”

Vrisha feigned a stretch and turned from him. She hadn’t felt full in weeks. No matter what she ate— protein, carbs, sugar—nothing filled the void in her body. She was beginning to think she’d never feel full.

“I’m just stressed about the firm dinner next week,” she muttered into the pillow. “Plus, my sick leave is almost up.”

“I want to,” said Vrisha, biting her lip, “I want it to be the only topic of conversation.”

“Better night,” mouthed Vrisha silently and turned off the light.

The next day, she found herself facing the same copper pot and faded recipe card. Vrisha consulted the list of ingredients and grimaced.

Some chicken thighs, a couple limes, a spoon of turmeric, oil, a small cup of coconut milk, a little bit of tamarind pulp, good coriander leaves, a couple of spoons of mustard seeds, a handful of onions, some garlic cloves, grated ginger (the same amount I put in Dadda’s tea), paprika, jaggery.

After inspecting the crockery pot, Vrisha turned on the stove and watched as the metal formed a cloudy veneer. She poured out four measured tablespoons of vegetable oil before staring at the empty pot and tapping her foot. At once, Vrisha paled. Where were the chicken pieces?

She raced to the fridge, pulling out the cutlets and taking a whiff. Were they supposed to smell this way? She handled the meat like it was an unwieldy baton and triple-checked the sell by date. For a moment, she considered Googling “what is chicken supposed to smell like,” but thought better of it.

With the card in one hand and the bowl in the other, she poured the oil into the pot and stepped back. The smell was immediately acrid. Her nose crinkled as grey tendrils of smoke rose off the oil. She was leaning over the pot, still scrutinizing the directions, when the recipe card caught fire. Cursing, Vrisha turned off the heat and flung the flaming index card into the sink. Dampening a kitchen towel, she threw it over the pot and waited for the flames to die.

Once the flames had extinguished, she turned to the soggy recipe card and started prizing it from the sink. But each time she lifted an edge, the paper either stuck or ripped. By the time she found a butter knife to lift the card, it was ruined. Wet patches softened her Ba’s small handwriting, rendering the recipe into a strange illustration of blots and random letters. Her fingers hovered over the card, tracing the blurry letters. Closing her eyes, Vrisha imagined her Ba’s worn hand writing the instructions.


Her throat tightened as tears slid down her jaw. She needed the instructions. Her whole life seemed built around intangible dictates and edicts. And all of those things had measurements. The measurement of a career in a salary. The measurement of love in time. The measurement of family in children. Her chest tightened as she pictured the week unfurling before her. She saw her law firm associates at the door, wine in one hand and vague greetings in the other. She saw their eyes discreetly flying to her stomach. She heard the word “miscarriage” hovering in the twilight of their conversation. Shame latched onto her spine, bending her back, telling her to sink to her knees.

Vrisha teetered on the edge of slumping when her gaze fell on the crockery pot. From this angle, it caught the light and gleamed smugly. Challenging her. Her knees buckled, but instead of falling, she narrowed her eyes and gripped the counter. She pictured Ba hoisting her up by the shoulders, laughing at the ruined recipe card and asking Vrisha, “Did the sun forget to set?” For the first time that day, Vrisha smiled. Ba never cared for rules as long as there was room for laughter. And there was always room for laughter, just as there was always room for another try.

In that moment, her home fell away. The seams of her crisp kitchen opened up, yielding its tiles, bare beams, and cast-iron stove like ambrosia. When she closed her eyes, she saw Ba’s kitchen, with its peeling yellow walls, simple stoves, and blunt knives. Vrisha stared at her kitchen like a blind man gifted with sight. Everything from the curtain drapes to the ring on her finger seemed newly hallowed. Even the ingredients seemed transformed and elevated—as though an apotheosis bloomed wherever the light struck. Her hands were the Pandavas, the squat ingredients were the Kauravas, and in between them was a battlefield.

Vrisha exhaled slowly, savoring the compression against her stomach. She let the instructions go. Turning toward the pot, she started anew. Like her Ba and mother before her, she eyeballed the oil before slipping in the chicken cutlets. A smile crept onto her face when she heard the series of crackles. Like an alchemist, she checked for flecks of burnt gold on the skin. The fragrance of sautéed vegetables snaked into the empty warrens of the house, its edges softening with the onions’ translucence. In went the tamarind pulp, slick and tart. Next the glossy, vermillion tomatoes. Vrisha bit her lip as lime juice leaked into the scalloped skin of a paper cut. The measurements no longer danced in front of her eyes. Instead, sun-soaked memories guided her hands and fine-tuned her nose until the pot bubbled and iridescent pools of oil floated to the surface. Vrisha stood hypnotized, her eyes halfway closed when the garage door roared to life. She heard Yash fumbling with his sneakers, no doubt leaving them in the middle of the mat instead of on the shoe rack.

He sniffed the air as he opened the door.

He eyed her suspiciously, “…from?”

“From the pantry. And the fridge.”

“How? Yesterday you practically tore the recipe in two.”

Vrisha hesitated. How could she explain the moment when she’d deciphered the recipe’s strange language? To her, it had been written in a forgotten tongue, long buried under the silt of appropriated dreams, stolen from a Vrisha who needed a manual for emotions. But she’d found it again. And it wasn’t on an index card; it was in a trick of the light. Wordlessly, she pointed to the table and set down two steaming bowls of curry and rice.

“I’ve only ever had your pasta, which is great, but—”

Vrisha pushed the spoon into his mouth and Yash barely protested before chewing. Pausing, his eyes widened as his gaze traveled from Vrisha to the bowl.

“It’s awful,” he said, pulling both bowls towards him, “Here, I’ll eat yours for you.”

She laughed, and within twenty minutes the remains of the curry lay streaked across the bowls. Yash pushed his chair away from the table, patting his stomach.

Vrisha thrummed her fingers against her warm stomach, “No. I’m full.”

Roshani Chokshi, a recent graduate of Emory University, is a 2008 Pushcart Prize nominee. Her writing has appeared or is forthcoming in Loose Change, In The Fray, and Feminist Wire. Chokshi is a recipient of Emory’s 2010 Academy of American Poets Prize.