Film: When High Wattage Directors Converged in the Big Apple 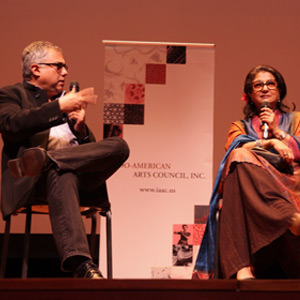 Anurag Kashyap. Aparna Sen. Buddhadeb Dasgupta. Gurinder Chadha. Nagesh Kukunoor. Nagraj Manjule. What if they all wandered into the New York night with megaphones and cameras and created their own tapestry of the city? While that did not happen, the combined star wattage of several talented directors certainly amped up the proceedings at the recent New York Indian Film Festival (NYIFF). With a diverse bouquet of offbeat independent films, NYIFF 2014 proved that there is life beyond Bollywood! LAVINA MELWANI takes you on a virtual tour.

Long before Slumdog Millionaire became a monster hit, it was shown here. Such is the legacy of the New York Indian Film Festival. Now in its 14th year, it is the oldest and most eclectic of Indian film festivals across the U.S., featuring substantive, and usually, offbeat cinema.

NYIFF is organized by the Indo-American Arts Council, whose executive director, Aroon Shivdasani, has steered the film festival through many name changes and avatars. It remains as vibrant as ever. “This year we had some films which were very pertinent to what’s happening in India and the world today. A lot of awareness is being brought to these topics,” observed Shivdasani.

The festival kicked off on a fun note, paying homage to India’s best known cinematic tradition with a Bollywood flash dance mob in Times Square. Festival director Aseem Chhabra talked about what distinguishes this festival from others—unusual films, regional cinema, and little gems picked up after screening hundreds of films. Some of them are national award winners, others have been shown at Sundance, while many were acquired through serendipity.

Many of the films have yet to be released in India, and each is remarkable for its unique back story. To the delight of fans of alternative Indian cinema, all the directors were in New York to talk about their creations.

Opening night saw Anurag Kashyap’s Ugly, a tale of corruption and violence with an unforgettable ending. The centerpiece screening was the Geethu Mohandas directed Liar’s Dice, a stunning film about a young woman’s search for her missing husband, which won the Best Feature award. Nagesh Kukunoor’s provocative Lakshmi was another crowd puller, even as its theme of violence against women continues to dominate the headlines in real life. The festival closed with Aparna Sen’s Goynar Baksho, a humorous ghost tale interwoven with the larger theme of the changing roles of women in society.

Diversity and contemporaneity
The lineup of about 45 films reiterated the fact that cinema entertains, but is also a mirror to society and a rediscovery of what we may have known but forgotten. Perhaps the most powerful film screened this year was Fandry, the bleak tale of a young Dalit boy and the indignities heaped upon him—devastating in its impact and one that the viewer cannot help but internalize. The dialogues, shifting between English, Hindi and Marathi movingly conveyed the real life injustices meted out to Dalit communities. The knockout punch, so to speak, was the Q&A with Nagraj Manjule, the film’s director who based Fandry on his own life—but more on that later. 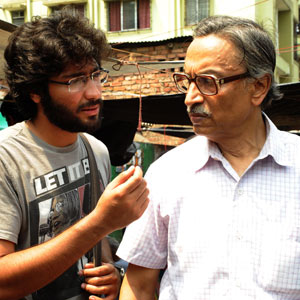 Apur Panchali explores the lives of young child stars. How does the world treat them after their short spurt of fame? This was inspired by the real life story of the child actor Subir Banerjee who played Apu in Satyajit Ray’s Pather Panchali.

Mrs. Scooter is an off-beat tale of a clerk, his new bride, and a new scooter.

The Coffin Maker by Veena Bakshi is studded with gleaming performances by veterans Naseeruddin Shah and Ratna Pathak Shah.

Regional and cross-border gems
Audiences also lapped up regional films such as Astu in Marathi, Sheshar Kobita in Bengali, and As the River Flows in Assamese, films that transcended language and culture to lay bare the drama within. Zinda Bhaag was a cross-border film co-directed by Farjad Nabi from Pakistan and Meenu Gaur from India. The film, which stars Naseeruddin Shah, is in Hindi, Punjabi, and Urdu and shows the common aspirations of youth in both nations. There was even a short film, Dr. Chavan, in Vietnamese. An eclectic audience that included many Americans lapped it all up, thanks to effective subtitling.

For this writer, the thrill of NYIFF lay in its informality and easy access to top-notch film folks. A delightful sense of camaraderie and informality pervaded these encounters. I interviewed Gurinder Chadha in an impromptu chat, sitting on the stairs of one of the screening rooms inside the theater. One was just as likely to bump into famous and not-so-famous directors seated next to you during the screenings. My takeaway from these serendipitous moments—all these directors are passionate fans of cinema and as anxious to catch new, offbeat films as you and me!

Among other directors who were present to share their insights with audiences were Amit V. Masurkar (Sulemani Keeda), Ed Owles (The Auction House), and Geetu Mohandas (Liar’s Dice). Also grabbing attention were several women directors and directors from India’s neighbors like Pakistan, Sri Lanka, and Nepal. Notably, the festival attracted a number of young filmmakers writing about contemporary issues and offering their own take on a diverse range of topics from child trafficking to Alzheimer’s disease. 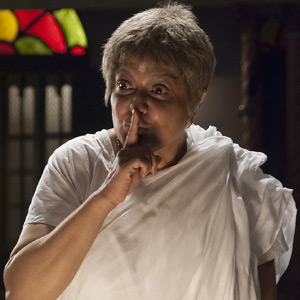 In the hectic buzz of the festival, I did manage to connect with some of them, including the wonderful Aparna Sen whose Goynar Baksho has the underlying theme of the generational changes among women, captured through the filter of lighthearted humor.

Sen’s films (36 Chowringhee Lane, Mr. & Mrs. Iyer) have dealt with relationships and the human condition but in this latest film she has moved away from stark realism to the supernatural. Said she, “I think I am becoming more interested in doing films like Goynar Baksho, films which have a lot of magic realism. I am just tired of constantly being logical!”

Sen, who has acted in films directed by Satyajit Ray and acted with leading men like Soumitra Chatterjee and Uttam Kumar, has led a life seeped in cinema. She recalled, “Well, my early life was very much as a child of the film society, since my parents were founder members of the Calcutta Film Society. My father was the secretary, and he and Satyajit Ray together founded it, and my entire childhood was spent looking at world cinema. My father was a filmmaker, he was a film critic, and the atmosphere at home was just cinema, cinema, cinema all the way.”

(Left) Anurag Kashyap on the sets of Ugly.

Different childhoods shape different people. Anurag Kashyap did not get to see world cinema till he was a young man. During his childhood, he’d remarked to me earlier, “It was just one Sunday in the month when we would rent a VCR to watch a movie. We went to cinema halls very few times; only when an Amitabh Bachchan movie released in Lucknow would we travel to the theater. Otherwise it was all on a rented VCR. Later, much later, at a film festival in Delhi where I saw the films of de Sica, for the first time I related to what I was watching not as something separate or other worldly but something that I could do, too.”

Now of course, Kashyap is among Hindi cinema’s most creative names, known for pushing the envelope further than anyone else. His latest film Ugly, which showed at NYIFF, left everyone thoroughly shaken. Yet, he managed to humanize the distasteful characters in Ugly with his insight: “I believe there’s a bit of darkness in all of us—and these are desperate people who’ve made bad choices in life, caught in circumstances where they get manipulated.”

Ugly, shot in actual homes and locations, is based on the startling statistic of some 3000 children disappearing every year in Maharashtra. At NYIFF, its lead actor recalled the emotional toll the role took on him: “Every night I used to sleep just three hours!”

In an earlier interview, Kashyap spoke to me about his directing style, of workshops where everyone talks about themselves: “Scenes come out of that, out of their own lives. I can write them and put them together very well but I cannot imagine all those scenes. I’m not that big a genius. I’m a thief—I borrow from people’s lives.”

Meeting first-time directors at NYIFF was as fulfilling as interviewing the big guns. Meenu Gaur is the co-director of Zinda Bhaag—Pakistan’s entry for the Oscars—a powerful story about illegal immigration and the young lives destroyed in the process.

India-born Gaur now lives in Karachi with her Pakistani journalist husband. She grew up watching parallel as well as popular cinema, and has a fondness for Guru Dutt films.

Can there be collaborations between India and Pakistan? Gaur says they are already happening, although not officially. Her own film stars the superb Naseeruddin Shah who accepted his role simply on the basis of the film-makers’ letter, without ever having met them! Most Pakistani films get their post-production done in Bangkok, but this film was completed in India, which may indeed lead to future collaborations between the two neighbors. Gaur also had Urmi Juvekar from Oye Lucky! Lucky Oye! collaborating with them—all done via Skype! A new world order indeed. 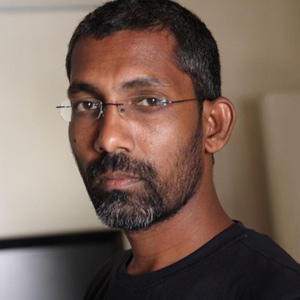 (Left) Nagraj Manjule, winner of the National Award for Best Film for Fandry.

Finally, I sat in on the Q & A with Nagraj Manjule, the maker of the poignant Fandry. The film, about India’s entrenched caste system, won audiences and awards alike, including the National Award for Best Film. In real life, Manjule’s father practiced a profession reserved for the low castes, rounding up the wild pigs in Brahmin villages. “It used to pain me a lot when I was called fandry (wild pig). I used to wonder why I’m here, why my life is like this, why am I fandry,” recalled Manjule. “I used to think about my life, my circumstances. I carried this with me for 30 years.”

Asked if Indian society has evolved, he explained that his tale shifts between the centuries, from ancient times to contemporary to reveal how little attitudes have changed in India. There was pin-drop silence as he added, “I cried a lot during the process of writing it and I experienced the grief that this is very bad and that nobody should have to deal with this level of sorrow. I still find it hard to watch the film.”

Someone asked him, “Whenever Godzilla strikes, he strikes New York. In your film, Godzilla was the fandry or pig striking the village. How was it, handling this subject?”

“America needs a big fear,” replied Manjule with a smile. “They don’t get scared by chote mote darr (small fears). They need Godzilla and they need it again and again. India has many fears—small, unknown fears hidden in its heart. To be afraid in India, you don’t need a Godzilla. I hope soon we will get relief from these fears and then we will deal with Godzilla!”

That’s the strength of these independent film directors, that they examine the underbelly of Indian society—warts and all.