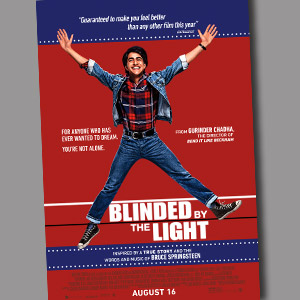 Acclaimed filmmaker Gurinder Chadha is back doing what she loves best, telling Asian stories with universal themes. Her new film, Blinded by the Light, is a tale of family and conflict, dreams and growing up.

Remember Bend It Like Beckham? Gurinder Chadha’s 2002 film, a romantic sports comedy, explored the life of an 18-year-old Punjabi Sikh girl in London, who aspired to play football/soccer against the wishes of her conservative parents. Seventeen years on, Chadha is back at exploring one of her favorite themes— the tug and pull of familial bonds—in her new film, Blinded by the Light. This inspirational drama shares the story of a British-Pakistani teen who uses poetry, inspired by Bruce Springsteen’s music, to find his own unique voice. 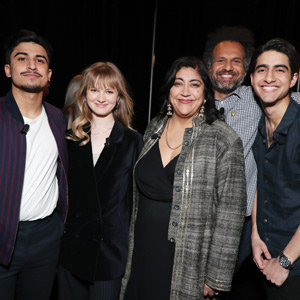 Why Bruce Springsteen? For more than one reason, actually. Says Chadha, “I’m a huge Bruce Springsteen fan. I have been since I was in school. I love the way Bruce tells stories, little cinema stories in his songs. [Also], Sarfraz Manzoor, who wrote the memoir that the film is based on is an equally big fan, probably bigger than me. He’s a superfan! I’ve seen him many times, hanging around in hotels, trying to get pitches. So, the combination of a 16-year-old Pakistani kid and Bruce Springsteen was very, very relatable and relevant to me. I was like ‘Yes, I can tell this story,’ but of course, we could only do it with Bruce Springsteen’s permission.” 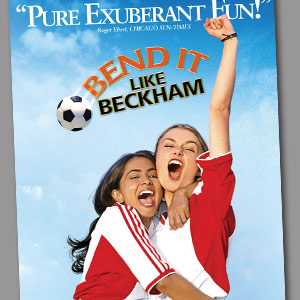 The filmmaker, writer, director, and producer decided to tell the story because she feels like it represents part of her heritage—her ethnicity and where she grew up. Blinded by the Light is a joyful story of courage, love, hope, family, and the unique ability of music to lift the human spirit. The film tells the story of Javed (Viveik Kalra), a British teen of Pakistani descent growing up in the town of Luton, England, in 1987. Amidst the racial and economic turmoil of the times, he writes poetry as a means to escape the intolerance of his hometown and the inflexibility of his traditional father. But when a classmate introduces him to the music of Bruce Springsteen, Javed sees parallels to his working-class life in the powerful lyrics. As Javed discovers a cathartic outlet for his own pent-up dreams, he also begins to find the courage to express himself in his own unique voice. This draws a lot of parallels to Bend It Like Beckham where the protagonist struggled to be on the same page as her strict desi parents.

Chadha enjoys merging her two worlds together in her films. That doesn’t necessarily mean all her films are laced with a “desi flavor.” It’s important, she feels, to narrate those voices, but only if the subject matter demands it. “I think for me, it’s what I know. I find there’s a lot of drama within our families that is very universal, particularly where a kid has certain dreams of what they want in life. Parents who have struggled for their kid’s type of opportunities have their own dreams of what they want, and often those don’t match. And in that little chasm between the two is where I find a lot of rich drama to be mined.”

Stills from the film, Blinded by the Light.

Chadha says many stories are relatable with immigrant communities, which is why she finds it so compelling to place her films in those settings. “It’s emotional, very emotional, and it’s very universal because actually, being Asian is part of it. It’s a universal thing. Most parents want different things for their kids. The kids want to do things differently. I’m always out to start Asian, but I always want to end up being very universal.”

Chadha says Hollywood and Bollywood are two different beasts. She loves her palette of Bollywood movies, but, “I think Bollywood is different, because Bollywood appeals largely to Indians and Asians—and that’s the Asian diaspora as well as, obviously, Asians in India. For me, my films are for that audience, but also global … international. So, there’s a difference, what in India they call crossover movies! For me, I’m able to make films that reach lots of people from different cultures all over the world.”

Chadha says the genres also vary, and the landscape of Indian cinema which incorporates a traditional hero/heroine is not necessarily the format of a Hollywood movie. Bollywood films also rely heavily on song and dance which is not something that most Western films focus on. “It’s not to denigrate Bollywood films. I think they do a good job of what they are doing; and I think of late, they are being a lot more socially conscious. Padman was a big hit. Dangal [and] everything Aamir Khan does always has a nod to some kind of social change. So I think Hindi cinema has definitely come of age as well.” What does she like watching, personally? Chadha says she loves musicals. “I like a good drama with great acting, which has a good social commentary.”

Cinema today is seeing rapid, disruptive changes driven by technology. While many people still love going to the theater, streaming services like Netflix, Amazon Prime, and HBO are changing the game to reach new and younger audiences. “I think things have definitely changed. I think Netflix has changed everything,” says Chadha. “I think for the consumer, [it’s for] the better. Because it means we can binge watch. It means the standard of drama is much higher. People can pick and choose what they are going to watch. And so, I think the key is variety because different audiences want different things. And streaming can let that happen. But I still like the idea of [working] for TV because I like the idea of everybody watching the same thing. So, I like to do Beecham House on ITV on a Sunday night, because that’s how I used to watch TV when I was young. But I think if it’s cinema, people will always go to the movies, whether it’s in India with Bollywood films or here, [with] the big visual effects movies. I think this will always be cyclical.” 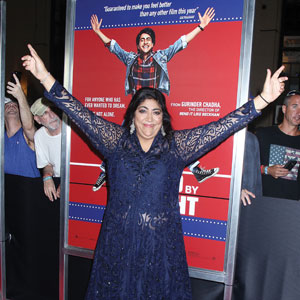 Chadha also talked about her role as a woman filmmaker and what’s required to make it safer for both men and women in the industry, especially in the current milieu where there is heightened awareness of issues like sexual harassment and discrimination. “I think the #MeToo movement has had a big impact on our industry. It’s hard to ignore the casting couch, which we know happens. It happens a lot in India, and not enough is being done in India on that. I think there’s just a different approach in our industry to have women as a part of it, and there are genuine moves [now] to make women a bigger part of the industry. I don’t think it will take time, you’d think these things will take time, but there are certainly changes.” 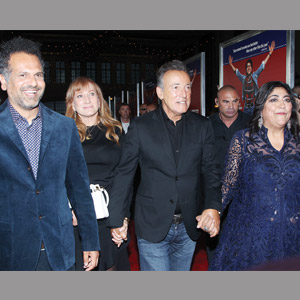 The Boss himself—Bruce Springsteen (center) with his wife Patti Scialfa at the red-carpet event of the premier of Blinded by the Light, along with director Gurinder Chadha (right) and Sarfraz Manzoor (left), one of the writers. (Photo: courtesy Warner Bros)

Chadha’s film almost did not happen. Serendipitously, when she met Springsteen at a red-carpet event a few years ago, she introduced herself as the director of Bend It Like Beckham and told him she wanted to make a film on his music. Springsteen gave the film his blessings right away.

Inspired by a true story, based on Sarfraz Manzoor’s acclaimed memoir Greetings from Bury Park: Race, Religion, and Rock N’ Roll, the film stars Viveik Kalra, Kulvinder Ghir, Meera Ganatra, Nell Williams, Aaron Phagura, Hayley Atwell and Dean-Charles Chapman, among others. The story is underscored by the music and lyrics of Springsteen. The film released on August 14th and is distributed by Warner Bros. Pictures.

After famously reinventing his career from a consultant at Accenture to broadcast journalism, Archith Seshadri has been a reporter and anchor at various locations in Georgia for local news affiliates of CBS, ABC, and FOX. Most recently he finished a 2-year anchoring stint for Zee News’ English channel, WION, in New Delhi.