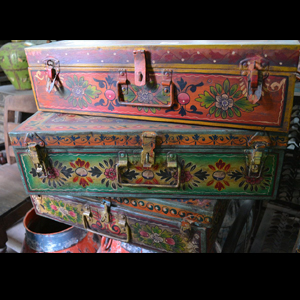 This story is set in India. There was a time when a bride carried all her worldly possessions in a metal trunk when she moved from her parental home to her marital home.

I was in my late teens when my love affair with all things antiquated and ancient began. For my extended family, my penchant for collecting and restoring all those household items from my grandmother’s time was a source of laughter and they put it down as one of my quirks. Quite often, I found my home turning into a regular junk yard whenever my relatives cleaned out their attics or moved from their ancestral homes to modern apartment blocks.

It was in the last decade or so that I discovered there was a growing market to refurbish and decorate homes with things that were discarded by previous generations. In the ever evolving human race, the very same obsolete objects made for attractive décor and a source of animated drawing room discussion as it led one to reminisce about places, people and things. All in all, I didn’t have much to complain as my hobby turned into a lucrative career in recent years.

It’s a matter of irony that many of my generation in the twentieth century scoffed at the household objects that were used in our ancestral homes by our grandparents and parents. In the new millennium, companies like Amazon were laughing their way to the bank, with people being reminded by social media on the health benefits that could be gained by cooking in the very same clay pots or using the brass and copper utensils which we had replaced with all steel and shine.

It was all in a day’s work for me as I was preparing to restore an old trunk. In years gone by, a new bride carried all her worldly possessions in a metal trunk when she relocated from her parental house to her marital one. The trunk had slowly lost its importance as it made way for a more viable, lighter option or the recent suitcases with wheels. Surprisingly, this sturdy and forgotten piece of luggage had a good market not for its original purpose but as a very beautiful corner piece or as décor for the foyer.

The ludicrously small storage crevice on the inner lid of the trunk made me always wonder at the purpose of having it at all, and as I was cleaning it with fine brush, I discovered a yellowed piece of paper. Nothing prepared me for its almost negligible content. In a clear tone of the unlettered, the message carried an entire novel within its five words.

The poignancy of the statement—Will you create a new home with me? (rough translation)—made me abandon the restoration project and delve into the life of its owner. The trunk had come to me from the in-laws side of my family. I I visited the homes of several relatives and made numerous calls, often speaking to elderly people to get more information. It took me days of research and follow-ups as the trunk had changed hands multiple times. One old picture I found made a big difference. The lovely lass—staring back from the dog-eared, yellowed, black-and-white, sepia printed photo—willed me to tell the tale.

“She was a distant relative and my memory of her was that she was always clad in a beige sari as she became widowed by the time she turned fifteen, I think,” said an octogenarian aunt of my mother-in law, tapping into her memory. “I got married and moved away but she was taken care of by my father till her death. She was with him in Bombay, and then she was with them when they relocated to our village near Guntur. Well-respected and taken care of by my parents, she used to cook like a dream! Though I loved her, I don’t remember speaking to her much.”

This beautiful relative apparently spent most of her free time cooped up within the four walls of her brother’s home. Looking out the back window of the house that overlooked the alley, the only visible sign of life was the shop of a tailor. Never having interacted with males other than her relatives, she had apparently weaved romantic tales and even written this undelivered note.

Brought to the present, I brushed aside my tears. The tailor would have never envisaged being of any romantic interest to anyone. He might have felt himself being watched but there was no evidence that they had ever met, or would have been allowed to meet, given her status as a widow in those days. Unwittingly, he had brought some color to my great-grandaunt’s bleak life. She lived within the four walls taking care of the household and playing with her brother’s children and grandchildren until she died an octogenarian.

Heartbreak and loneliness was not a sufficient reason to snuff out her life earlier, I suppose.

Chandrika R. Krishnan, a Bengaluru-based Indian writer and educationist, likes all things beginning with a ‘T’ (talking, teaching, tales, tea). Her 200+ published articles, poems and stories are eclectic and mostly experiential and have appeared both in print and online media. Her stories have also been published in anthologies. For more, go to chandrikarkrishnan.com