Go Ahead, Take on the World! 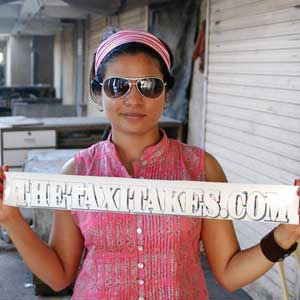 In 2008, while Mumbai was being attacked by terrorists, CUNY graduate student Vandana Sood watched the nightmare unfold on her laptop in New York City (NYC). “I had been working with South Asian taxi drivers in NYC, making short films about their experiences around racial profiling and discrimination post 9/11.” This background led to to Sood’s idea of “The Taxi Takes,” a web-video project comprising several short films based on candid conversations inside Mumbai taxis, centred on terrorism-related issues like faith, identity, and religious conflict.

Sood chose the taxi as a backdrop for such a social experiment because of the little niche of privacy it offers in the largely public space of the streets. “The taxi is both private and public enough to include people from different cross sections of society. The taxi space is also isolated from the streets and lets people talk intimately as they take a journey together. The nature of a meeting in a taxi is such that the drivers and passengers know that the chances of them ever meeting again are close to none. That makes the talks open, candid, and spontaneous.”

Within a few months, the idea kept growing in Sood’s mind till she packed her bags and left for Mumbai, a city she had visited only once before and which she hardly knew. The whole project was a gamble and she had no idea if it would actually work. Would passengers allow her to film them? Would drivers allow her to use their cabs?

“A friend told me about Kabi S and her project ‘Meter Down’ in Mumbai [a podcast consisting of conversations with taxi drivers]. I contacted her and she was incredibly open about helping me. She introduced me to Jamid Ali, a young taxi driver from Uttar Pradesh who agreed to let me drive around in his taxi for a day. During this first day, I figured out most of the obstacles and challenges I would face in implementing The Taxi Takes. Most of the people who helped me along the way were friends of mine who were convinced about the power of the project. They generously gave of their time and talent without pay, for credit on the website and a free lunch. I could not have pulled it off without my crew and team.”

It was her ability to network and her resourcefulness that led her from one person to another, one place to another. She was introduced to women taxi drivers through the private taxi company Priyadarshani. She went out to taxi stands and pitched her project at the top of her lungs to the drivers waiting for rides in the Mumbai heat. Some adventurous drivers took her up on her offer and were only too happy for a chance to speak their minds. Sood took taxis everywhere and struck up conversations with drivers along the way. She looked for drivers who had witnessed the attacks themselves.

Sood was pleasantly surprised by the positive responses she got from both the drivers and the passengers. In fact, she got a 100% strike rate! “If I even tried a stunt like that in NYC, most passengers would give up that cab and wait for another one. In the West people have a greater sense of privacy and space. In Mumbai I did not experience the same sense of self-preservation and wariness about my effort to drive and film inside cabs.” When passengers hailed down the taxi and saw her in it, they would think that the cab was already taken. Sood would patiently explain her presence and gain consent to let her ride with them and film.

It took more than explaining to get people to actually open up and talk freely though. Sood attributes her success to her less than intimidating demeanour. Since the drivers abided with the unwritten rule that they would not speak unless spoken to, Sood would introduce the project to the passengers herself and then get the driver to kick off the conversation, and Sood would film the candid chats between the driver and his passengers.

The Taxi Takes, for Sood, was a personal journey of discovering the city of Mumbai with its many faces. “The most enjoyable part about working on this project was discovering the city with its taxi drivers as my guides. I remember going to Chowpatty for the first time with Jamid Ali who sat down on the beach and talked about his views on Islam and terror. Each driver had his or her own unique story of how they came to the big city, Mumbai, and how they became drivers. As I filmed and went out on the streets with my camera, I enjoyed getting to learn more about this incredibly resilient and inventive city and its people.”

The Taxi Takes has been well received worldwide. It has been featured on The Huffington Post, Voice of America, World Focus, and Beliefnet, amongst others. The films have been screened widely at film festivals and won the Best Documentary Award at the Festival ArtDeco de Cinema in Sao Paolo, Brazil.

Sood firmly believes in the voice of the common people and wants to provide a platform for them to speak their minds freely, without prejudice, and be heard. “A panchayat or town meeting of sorts could be held inside a taxi and people from all walks of life could raise their voices collectively against a common global atrocity like terrorism,” she suggests.

Sood has been cashing in on the social media boom to raise awareness about the project and help people raise their voices against terror. The web, according to her, is the best venue to have a truly global discussion about a topic that affects all of humanity. “I decided to create The Taxi Takes as an online media project which exists on various peer-to-peer platforms. As a conventional feature length documentary it would only be seen at film festivals. It has components on Youtube, Vimeo, Twitter, Facebook, Blip.tv, Flickr and Posterous. Each of these channels is integrated on to the website and blog to increase and garner a larger audience.”

Sood has done all the publicity on her own, using social media and friends, without the aid of an agent. She spreads the word about The Taxi Takes wherever she goes. “I attended the annual SAJA (South Asian Journalists Association) convention in NYC where I met Wojtek Gwiazda of Masala Canada and Ben Piven who worked at Wordfocus. These meetings ended up in The Taxi Takes’ first radio coverage and a great interview and feature on Worldfocus. Similarly, through screenings and film festivals, meeting different people and by word of mouth, the project has received more awareness.”

In fact, Sood had a very innovative idea about advertising her campaign. She designed The Taxi Takes stickers and put them on the back of the taxis during the shoot. The final image of the taxi has been used for publicity on business cards and DVD covers. “I’ve personally put The Taxi Takes stickers on lamp posts in the lower east side in NYC and handed them out as replacements to business cards!”

The success of The Taxi Takes has fuelled Sood’s desire to speak up on a number of issues close to her heart, while taking this project forward. She plans to network and crowdsource with people internationally. “The basic concept of The Taxi Takes becomes intellectual property for anyone to do what I did. Anyone inside a taxi in any city around the world can take part in The Taxi Takes. Use your smart phones and video cameras to capture your own mind-bending conversations. Taxi drivers are politically minded and hard working blue collar workers who have a lot of takes on the world.”

The latest expansion of her project promises to reach for the skies. “‘The Taxi Takes on the World’ is/will be an online film and video festival that will focus on dialogues around terror, faith, identity, and religious conflict. It aims to empower the citizens of the world to have their say on the issues that matter and divide us from one another. It would be eye opening to hear exchanges about humanity from Beirut, London, Cairo, Hong Kong, Belgrade, Berlin, Dubai, Shanghai and any other city that experiences cotemporary conflict. Since human beings have a similar experience of suffering, conversations around terror strike a common cord. Only free communication amongst people will solve our global problems.” Source: India Currents.

Anjum Dhir Kulkarni is a freelance writer from India who has written extensively for publications in India and abroad across genres, including lifestyle and technology.