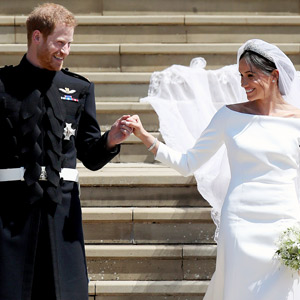 End of the Beginning… ​or Beginning of the End?

The recent royal wedding of Prince Harry and Meghan Markle was not just about the splendor and grandeur, but also a harbinger of changing times.

As the dust, albeit golden, settles on the recent royal wedding, as the newly wedded couple and their enthusiastic attendants are catching their breath, the time is ripe to have a closer look at this splendid and spectacular event. The awe and the amazement of people around the globe was generated not only by the splendor of the occasion but by the fact that a new chapter of human history was unfolding. A “strong, confident mixed race woman from America” was wearing a royal crown by marrying Prince Harry, the Duke of Sussex. Time indeed, can breed inconceivable miracles!

Meghan Markle is the kind of a person whom America would be proud to produce. Not rich by birth, but thriving by the wealth acquired from talent, tenacity, and exuberant self-confidence. She is a child of mixed race: her mother is African-American and father is Jewish, and they were married by Brother Bhaktananda (born as Michael Krull in Pennsylvania, later a disciple of Paramhansa Yogananda) at the Self-Realization Fellowship Temple on Sunset Boulevard. Meghan struggled through a hard, harsh Hollywood pathway until she reached USA Network. She has been pacing forward as a determined, self-groomed youth of America. She met Prince Harry, who had earlier floundered on his pathway, afflicted with alcoholism and searching for his self-image. He found a perfect partner in Meghan Markle.

Britain in background…
“Britishers are born, not made” was an old English aphorism. Although composed of immigrants, long time immigrants in some cases, not one immigrant in England escapes the feeling of being treated as if they were “other.” The glimpses of this prejudice were unmistakably captured on camera when the television focused on some of the faces of the Brit elite during the wedding ceremony. The stiff lips and stern countenance of some of their faces stood static even to the fervent and animated appeals of the Reverend Michael Curry, the presiding bishop of the Episcopal Church. To see an American woman of mixed race fulfilling her dreams by wearing a royal crown could be a nightmare to some of these native Brits, a double jeopardy—an “alien” American having black ancestors! The glass ceiling was broken, but the light of the overlying sky failed to penetrate underneath.

Then why were the royal doors unfastened to let an intruder in?
The foremost reason could be the wisdom and sagacity of Queen Elizabeth II, who keenly perceived a moment “whose time had come,” as written by Victor Hugo. She perceived that the old England was now transformed into a multicultural country. To deny this new reality was to create an enormous army of antagonists and generate caustic comments of the world that the British Empire was still within the spell of discrimination by color.

Black people have been a part of the British Empire as far back as the Roman times. Even in the famous Shakespearean play Othello, the main character was a dark colored man possibly of African origin, and his beloved heroine Desdemona was a white woman. There are also some credible references emerging that there was African heritage traced in some English queens.

Keeping all this in mind, a graceful acceptance of Meghan Markle in the royal pedigree was politically prudent. It saved the British Empire from alienation from the rest of the world. The English stand taller because of this wedding. The monarchy needs to be applauded for this affirmative attitude.

Meghan’s crown is still thorny…
In this most interesting game of chess, if the “queen” takes one right step, Meghan, the other player, will have to reciprocate with a requisite response. Accordingly, she will be expected to observe a silence in all situations of political conflicts because that is the royal rule. “You will not be sorry for what you have not said,” is the way the royal policy stays off the path of peril. This is going to be specially suffocating for Meghan who will not like to live the rest of her life as a prisoner of the palace. She is an American lady who will not accept silence for the sake of safety. She will opt for oration when a situation demands, like a true American. This may generate some quakes and tremors in the solid palatial stability. Time will tell the consequences thereof.

She also will have to be mindful of the royal history sprinkled with many divorces. The tragic tale of Princess Diana will hover around her head like a Shakespearean ghost. To be compared with Princess Diana, as we repeatedly saw in media, is hauntingly disturbing. The comparison is unfair but natural because Diana’s history is so fresh and vivid. Her charisma is unparalleled but irrelevant to the promise that Meghan can portend. The palace lives in the past. Meghan, like an American, is a fairy of the future.

What will the future hold for her children? There will be prayers for her progeny to be white and blonde or redheaded. An equal number of prayers will be beseeching for a browner inheritance. What will England be like when they grow up?

Meanwhile, she will have to adjust to some attitudinal unpleasantries, as experienced by anyone venturing into another culture, particularly a citizen of the street attired in a royal robe. She is likely to dislike substituting her natural sunshine smile with a feigned and forced one, robbing her of her American transparency. She is most likely to steer her course of life with a resolute courage, resisting distorting transformations. A free spirit will undo all fetters. 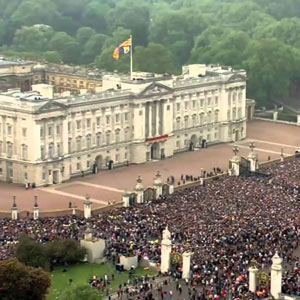 Could this be the beginning of the end? Can monarchy have mortality?
The cost of the previous royal wedding of Will and Kate was 34 million dollars. The recent wedding of Harry and Meghan has an estimated cost of 45 million dollars. Many people consider this as a colossal cost of no substantial value. Maybe the Emperor this time was wearing too many clothes. Can economy eventually engulf the royal splendor? Graham Smith, CEO of the British republican pressure group, Republic, is bashing this wedding expense unabashedly. Whose money is this, after all?

England is not inexhaustibly rich and the pockets of its poverty are steadily deepening. Forty percent of families from black African and Caribbean backgrounds in England live in low income households compared with 19 percent of white families. Twenty-three percent of young black people and 25 percent of young Bangladeshi and Pakistani youth are unemployed, more than double the number of white job seekers of the same age group. These dismal figures are steadily worsening. The large masses of angry people bereft of hope can look at this extravaganza of the royal wedding with scorn and disdain. “Oh! How bitter a thing it is to look into happiness through another man’s eyes,” wrote Shakespeare in his famous play As You Like It.

“The royal family don’t stand for us. They never have,” says Candice Carty-Williams, author of a forthcoming novel Queenie. Royal weddings like this may add fire to their fury, forecasting a calamity to come. If these agonized people raise their head, they may not be afraid of losing it. 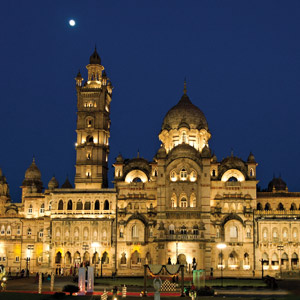 (Left) The Laxmi Vilas Palace in Baroda, India, from the Gaekwad dynasty in Gujarat. It may be four times the size of the Buckingham Palace, but is now reduced to no more than a grand venue for destination weddings.

India: an example of several types of monarchs
It will be very relevant in this context to recall that chapter of the history of India when it was a British colony made up of miscellaneous monarchs. That period provides the most valuable lessons to learn. I will selectively cite two kings of the Gaekwad dynasty of Baroda. Maharaja Sayajirao III, himself an adopted son, used all the wealth of his kingdom to impart a facelift to his kingdom in all aspects, e.g. art, science, architecture, education, and each field that contributed to the welfare of the people at large. His descendant Pratapsingh Gaekwad, who inherited a fortune of 300 million dollars, making him the eighth richest king at that time, was a hedonistic spendthrift. He broke the anti-bigamy law by marrying two wives, the second being a Hindu woman who became a Muslim to divorce her husband in order to marry him, and then became a Hindu again. He got her settled in Europe at an astronomical cost, and finally relinquished his kingdom under pressure from new Indian rule. He became a pauper from a prince. Two members of the same dynasty, one beneficial and one baneful, were both under British rule.

The Britishers, therefore, know the natural history of Monarchy. We are hopeful that Harry with his deeply human nature and Meghan with her helping hands will lead the British Empire to an upward spiral of nobility and welfare of the world. It is in that spirit that we all should cherish this wedding. The couple has taken its stride in piecing together two distinctly different parts of deeply rooted human traditions. They deserve our admiration and support.

Bhagirath Majmudar recently retired after 45 years of service at Grady and Emory University Hospitals, from positions of professor of pathology and associate professor of obstetrics/gynecology. He is also a Sanskrit scholar, a Hindu priest, and a poet, writer, playwright, and performer.