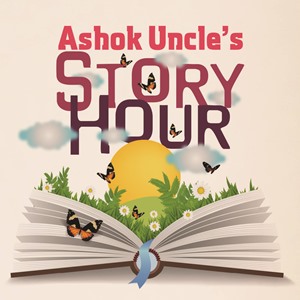 An endearing chronicle of the birth and continuance of a rich legacy of storytelling. Not only does it help sustain the heritage of an immigrant community and raise generations with values based in sacred mythology, but it also brings the community together in a happy blend of fun, food, and sharing.

When I was in elementary school, we spent a few years in the small town of State College, Pennsylvania, home to Penn State University. There, every other weekend, in the basement of an Indian family’s home, my sister and I and about 20 Indian-American kids sat transfixed while Ashok Uncle told stories. He narrated the stories of Ram, Seetha, Lakshman, Ravana, and others in short episodes. He breathed life into ancient mythology, making it appealing to preschoolers and high schoolers alike, and our parents, too. He found novel ways to make his stories relevant to a kid like me, who spent the rest of her weekend ice skating, playing Nintendo, and reading Nancy Drew. And so, in the 1980s when I was a child, Sage Narada was as wise and knowledgeable as he was in the olden days—but Ashok Uncle also told us that Narada had a rolodex in which he kept records of who was behaving well and not so well. 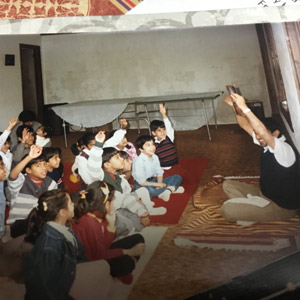 (Left) Ashok Uncle in his element—in the 1980s, in the early days of Story Hour in State College, Pennsylvania.

Ashok Gandhi became a storyteller in State College in August 1977, a year and a half before his first son was born. At the time, the small Indian community of State College had already started a story hour, and adults took turns narrating stories to children. One day, Ashok Uncle offered to do it. He continued to tell stories thereafter—for 38 years! And for 38 years, he had a steady stream of children in attendance, the oldest of whom now have children of their own.

His stories covered Dashavatara (the ten avatars of Vishnu), though the densest portions were the Ramayana and the Mahabharata. Going through the cycle of ten takes a long time, he said. In 38 years, he went through the Dashavatara about three times.

Over the years, he iterated on the versions to make them relevant to new generations of children. “I tried to make it contemporary for the kids,” he said. Narada, through the years, for instance, had access to Pentium processors, laptops, cell phones, and most recently, Facetime.

“The major focus is not the story, but the values,” he said, “and understanding why people are the way they are.”

I remember Story Hour as an interactive experience. Ashok Uncle asked questions, and we had to answer. Once he asked us to think about the difference between fun and happiness. “Come back and tell me at the next Story Hour,” he said. That question had lingered in my mind for two weeks.

I’ve thought about Story Hour often over the years and, two years ago, for a short span, even started a small version of it for the children in our neighborhood in California. I had enlisted the help of a retired Uncle in the neighborhood to tell the stories.

Recently, I was passing through State College and met Ashok Uncle and his wife, Smita Aunty, in their home. It was late when I arrived, but Aunty had kindly saved me some soup, chhole, and parathas. While I ate, I learned more about the history of Story Hour, and where Ashok Uncle drew his stories from.

Uncle’s stories are inspired by his own father, Chunilal Gandhi, who was a follower of Mahatma Gandhi (no relation). In the 1950s, in Veraval (Gujarat), Chunilal Gandhi would use his spinning wheel to turn cotton fiber into thread every morning. “The briefcase-like device would open up and with one hand he would spin it, and with the other pull it so that it spun into thread,” Uncle said. While his father spun for about an hour and half each day, he told the young Ashok stories from the Ramayana.

“I have the gift of remembering everything,” Ashok Uncle said. “And fortunately, I had listened to all these stories from my dad.” 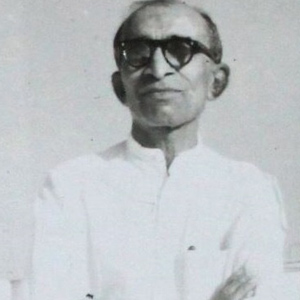 Ashok Gandhi’s storytelling derives from a rich legacy dating back to Gujarat, India of the 1800s. In the 1940s, Chunilal Gandhi (photo), Ashok Uncle’s father, became the storyteller in Veraval, Gujarat, and adults came to hear him every evening.

But there is more to it, and the history is remarkable. Ashok Uncle’s father had heard the stories from a storyteller in Veraval named Sundarji. A devotee of Lord Ram, Sundarji made a pilgrimage to Ayodhya every year. Every evening, in Veraval, he narrated the Ramayana to local residents, beginning in the late 1800s. “Sundarji had this glow on his face when he would sit on that seat and start talking about the Ramayana,” Ashok Uncle said, though he never met the man himself.

In the early 1900s, Chunilal Gandhi listened to Sundarji’s stories as a teenager. And in the 1940s, Chunilal Gandhi became the storyteller in Veraval and adults came to hear him every evening. Today, the Ramayana tradition in Veraval continues in the very same house where Sundarji and Ashok Uncle’s father sat and told stories. 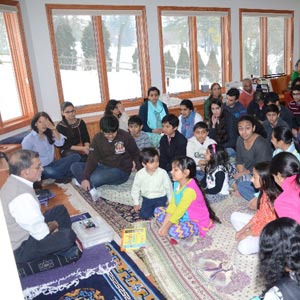 In 2015, Ashok Uncle retired both as a pharmacist and as the storyteller of State College. “It was every other Saturday for all those years, but we just built it into our lives,” Smita Aunty said. He and Aunty were blessed with a grandson and they wanted the flexibility to travel more often and more spontaneously. Ashok Uncle says that his decision to retire also had to do with something else. “Perhaps more importantly, I wanted someone to take over who could run it for another 40 years,” he said. 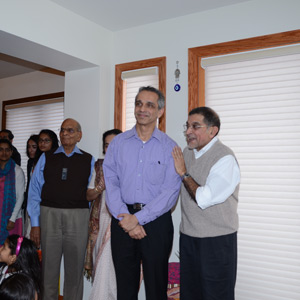 Luckily, another storyteller stepped forward. His name is Krishna Jayakar, and he is a professor of communications at Penn State.

When I was in State College in March, I had the remarkable experience of attending Story Hour, 27 years after my last session. As always, Story Hour started promptly at 10:30 am. On the day that I attended, Mr. Jayakar started out by briefly mentioning the tragic shootings in Olathe, Kansas.

“But we still believe that good people step forward to help,” he said. “We believe in this great country.”

I realized then something that I had not fully understood as a child. For the State College Indian community, Story Hour isn’t just a place for kids to hear stories. It is a gathering place. Some of the most regular attendees are older couples with grown children. Long after their kids have moved away, they continue to attend. The oldest attendees were in their 80s. “It serves the same purpose as a church or any community gathering place,” said Anil Kulkarni, a professor at Penn State and a regular attendee. Anil Uncle’s daughters are my age and do not live in the area. Still, Anil Uncle and his wife Shama Aunty attend Story Hour regularly.

On the day I attended, Shama Aunty was in charge of preparing food for Story Hour. She prepared pav bhaji—a spicy version for the adults and a mild one for the kids. As I stood in line to collect my share, Anil Uncle pointed out the spicy and mild versions of bhaji.

“One is for the kids and one is for the adults,” he said. “I’m not sure which one to point you towards.” He was joking, of course. I am now old enough to be the mother of some of the kids in Story Hour.

I mixed the spicy and mild versions of the bhaji. 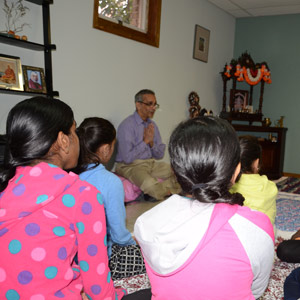 I guess I still feel like I’m somewhere in the middle, because, for that hour, while Mr. Jayakar spoke, I was fully absorbed. That day, he narrated the story of Drona and how he became the royal teacher to the Pandava and Kaurava princes. We heard a short tale in which Prince Arjuna, when asked by Drona to shoot a wooden bird far off in the trees, sees neither the trees nor the bird. Arjuna’s gaze is so focused that he can only see the bird’s eye. “What do we learn from this?” Mr. Jayakar asked. “Focus, concentration, eyes on the target.”

Afterwards, I felt that I could still use a Story Hour now and then. I understood, too, why Story Hour in State College has lasted for so many years—and why the following is so faithful. We all need stories. We need people to tell them to and people to hear them from. The very basis of community lies in this exchange. One pair of eyes meeting another, the hi, the hello, the how are you, the sharing of food, the togetherness of being.

I hope, as Ashok Uncle boldly pronounced, that Story Hour in State College will last another 40 years. And then a hundred more. And I hope that more of us will be inspired to gather and share stories with our children.

Sindya Bhanoo is a fellow in fiction at the Michener Center for Writers. She was formerly the Observatory columnist for The New York Times.