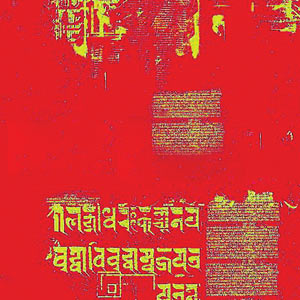 Hindus everywhere recite their prayers in Sanskrit, conduct all their ceremonial rituals in Sanskrit, and give Sanskritized names to their children. But what effort do we make to learn that language and keep it alive? In a wedding ceremony brochure, when I saw the name Vishnu distorted into Vish (meaning “poison” in Sanskrit!) and the turmeric-paste ceremony known as pithi spelt as “pity,” the outrageous neglect of our ancient, sacred language stood startlingly before me.

Language of the Gods
The significance of Sanskrit in Indian mythology, its religious and spiritual heritage, and its history cannot be overstated. It is the language of some of the most profound scriptures of the land. The spiritual knowledge it has espoused is timeless without ever being pulseless. Sanskrit (Sanskruta) is about 3,500 years old. One reason it survived this long is its sacred status and its multifaceted enfoldments. Over centuries it has embraced many diverse components of human endeavor like religion, art, philosophy, spirituality, poetry and literature, history, complex and computable grammar, and multiple sciences. It was therefore aptly known as girvana or the language of the elite (devas).

Sanskrit has a flexibility of function and openness of space to accommodate new ideas, concepts, and vocabulary. This is because it does not erect a rigid building but provides building blocks, thus rendering it always contemporary and ready for remodeling. Besides being a complex and rich language, it is also a vehicle that is capable of conveying sophisticated thoughts. Which other language contains about 60 figures of speech (alankar) and about 600 meters (chhanda)?

Ancient India was greatly influenced by the influx of many diverse languages and cultures. In retrospect, this was not entirely detrimental to our development. Among the Mughals, Dara Shikoh, son of Shahjahan and brother of Aurangzeb, was a great Sanskrit scholar and an avid follower of the Upanishads, which he translated into Arabic.

Voltaire, the French philosopher, having been profoundly impressed by the Upanishads, translated these scriptures further into German, whereupon Germany became the nidus of Sanskrit language! The British also established Sanskrit schools in England, Wales, and Scotland. In fact there are colorful stories of the penchant some of these Europeans had to learn Sanskrit.

Sir William Jones (1746-1794) was a great English philologist who mastered 28 languages mostly on his own. He failed to find a guru who would teach him Sanskrit, because of a religio-cultural barrier. Finally, a 90+-year-old shastri (“scholar” in Sanskrit) agreed to tutor him, provided Sir Jones did not enter his house but kept perched on his porch. He was humiliated for every mistake he made while learning the language, sometimes by the guru throwing his shoes at him. But he learnt the language nevertheless and produced some innovative research by drawing parallels between Greek, Latin, and Sanskrit and connecting their roots to Gothic, Celtic, and Persian languages. He translated Sanskrit literary classics like Shakuntalam and Hitopadesha into English. Not long ago, the University of Texas at Austin acquired all his papers from England to preserve in its library.

Now, many American universities have begun offering courses in Sanskrit. 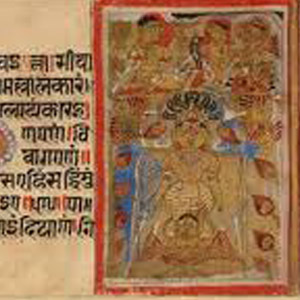 In need of CPR
In the land of its origin, however, Sanskrit has lost steam. During the colonial era, Lord Macaulay set in motion the introduction of English as the medium of administration, education, and a means for livelihood. Britain’s domination brought with it technological advances and trade. India’s doors opened to the world at large, English being the global lingua franca. And what about Sanskrit? Today, only 24,821 Indians and 1,669 Nepalese people consider Sanskrit as their mother tongue!

Historically, too, its elitism has cost some setbacks. Because of its complexity and precision that left no room for ambiguity, the language subsequently became exclusive to kings and the Brahmins. As an example, in the classics of Sanskrit literature, such as Shakuntalam, you see that King Dushyant speaks in Sanskrit, while his beloved Shakuntala, a forest raised maiden, speaks in Prakrit.

As the use of Sanskrit passed into the hands of Brahmins and concentrated there, they exploited this advantage to gain power and money. Knowledge became a privileged commodity. Characters like Shambuk in the Ramayana and Ekalavya in Mahabharata illustrate this discrimination. Brahmins, for their own benefit, imparted a religious hue to the language. This worked successfully in their favor in the effort to dominate the poorly educated masses of India. Subsequently, even Brahmins could not long retain the power and sophistication of this sacred language, which now was bereft of all its multiple facets.

The tragic outcome of this degradation is evident in the prevalent belief of even educated Indians that only Brahmins can perform religious rituals and the medium of their expression should be restricted to Sanskrit—even if they do not understand it and have no way to know if the performing priest is sufficiently equipped with the required knowledge!

Sanskrit grammar is extremely sophisticated, necessitating years of dedicated study. Lay people do not have that sort of time available nowadays. Does that mean we throw away the baby with the bathwater? In our globalized world where rapid change is a given and the old is often rudely shoved aside in favor of the novel and exciting, I humbly submit that it would be a blunder to relegate Sanskrit to obscurity. To regard this language and its scholars as “antiquated” is a common mistake stemming from a lack of vision. 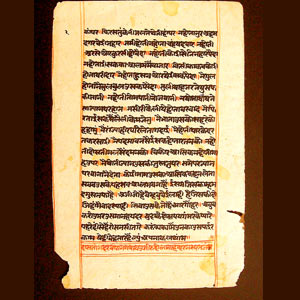 Sushma Swaraj, the late Minister of External Affairs of India, delivered a stunningly erudite and penetratingly convincing lecture on the need to preserve Sanskrit as part of our valued heritage. Her lecture on the importance of Sanskrit language (available for viewing on YouTube) is a gold standard on the subject.

While I do not see a possibility of Sanskrit reviving as a common colloquial language in the foreseeable future for reasons of its own, I do believe its other salient aspects should be preserved and revitalized. The language connects us not only to our own cultural heritage but also to Mid-Eastern and far-Western components of human civilizations. The resuscitation team for this noble but gigantic enterprise should, therefore, be composed not only of grammarians but also historians, anthropologists, humanists, artists, linguists, philanthropists, and many others both from India and other countries, working as a team. It is an idea whose time has come.

It is said of the Yiddish language that there will be an extended period between its dying and death. Of Sanskrit, I would say that it will never die because it is deeply seeded in almost all 16-plus regional languages of India. A plant that has sprouted conceals its seeds, rendering them apparently invisible, but the seeds themselves will reappear in its fruits. And yet, notwithstanding its embedded presence in Indian culture, it is my considered opinion that Sanskrit needs to be rejuvenated by a process of CPR—Consistent Persistent Revival.

Hope on the horizon
Is it impossible? Before we tend towards doubt, it will be worthy to remember that our most complete Sanskrit-English Dictionary by Sir Monier Monier-Williams was published posthumously in 1899, after being completed by his son in collaboration with multiple European authors. The last edition came out in 1990 comprising 1,333 large compact pages accommodating about 200,000 words with no erratum in the book!

Coming to our contemporary times, it is wonderful to note that the 18th World Sanskrit Conference will be meeting in Canberra, Australia in January 2021. Scholars from all parts of the world will be presenting papers and discussing the whole gamut of past, present, and future topics concerning Sanskrit. On the agenda will be the creation of a roadmap to impart a global status to the language.

My hope is that the Sanskrit word ajaramar—never ageing and never dying—perhaps best describes its timeless quality.

Dr. Bhagirath Majmudar, an Emeritus Professor of Pathology and Obstetrics-Gynecology, Emory University, Atlanta, Georgia, is also a Sanskrit Visharaga and Jagannath scholar, the highest academic honor in Sanskrit. As a Hindu priest, he has conducted some 400 weddings, many of them interfaith. He is a poet, philosopher, Vedantist, actor, and playwright. He can be reached at: bmajmud1962@ gmail.com