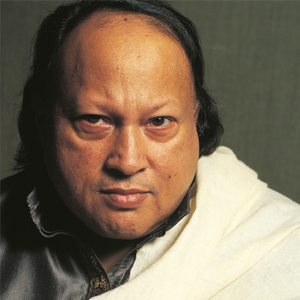 Music has no boundaries, and Nusrat Fateh Ali Khan’s life and music exemplify that. An Indian-American finds his roots and worldview listening to Nusrat.

According to family lore, my love for Nusrat Fateh Ali Khan was born when I came home from the hospital as a newborn and “Yeh jo halka halka suroor hai/ Yeh teri nazar ka qasoor hai” was playing on the stereo at home. These first lyrics that I heard, which translate to “This soft passion in me/ is the fault of your gaze,” are an appropriate metaphor for my relationship with Nusrat’s music. My mother goes even further to say that this special relationship is actually because she listened to Nusrat when she was expecting me. My parents also tell me that they played his music to relax or put me to sleep as a baby. I hope all these claims are true because it means that there has not been a moment since I was conceived that I have not enjoyed Nusrat’s music. Though I also immerse myself in other kinds of music, I always return to my first love, Nusrat Fateh Ali Khan.

Starting as a child, I played Nusrat everywhere—on the household speakers, in the car, on my portable CD player, you name it. While many of my classmates talked about Radio Disney and other popular songs of the day, I remained oblivious to them all.

Born in 1948 in Faisalabad, in what is now Pakistan, Nusrat was known as Shahenshah-e-Qawwali, or “king of qawwalis.” Qawwali—“that which is recited”— is a form of dhikr (remembrance of God) practiced by Sufi Muslims. At a typical performance, a Qawwal (lead singer) sings a verse, which the large accompanying
ensemble then repeats after him. Through repeating various qualities and characteristics of the divine, the singers work up their passion and energy in a manner that is akin to intoxication, and that engages the entire audience.

I recall hearing “Allah Hoo” as a 6-year old in the car with my father when he put on a CD. As the wailing sound and the soft beginning rose to a crescendo that was so strikingly different from the sing-song lyrics I learned in kindergarten, I remember feeling a surge of pride in my Indian roots. In seconds, I had completely fallen in love with the wonderful melody and rhythm. I was fascinated by the transition in the qawwali from the repetition of “Allah Hoo” to “Yeh zameen jab na thi/ Yeh jahaan jab na tha.” Different CD compilations had different rhythms and different transitions for “Allah Hoo” but the lyrics were always the same, “God is/ when there was no earth/ when there was no universe/ only You were there.”

Nusrat’s music was to have a significant impact on how I viewed myself as a South Asian growing up in Los Angeles. In my mind, he was one true embodiment of an undivided South Asia. Nusrat’s music of tolerance and unity knew no boundaries, and he inspired  me to assume the same mindset despite the political and religious divisions in India and around the world. My enthusiasm for, and understanding of, Nusrat’s music was greatly enhanced when I connected with Dr. Varun Soni, Dean of Religious Life at University of Southern California, where I was an undergraduate student. 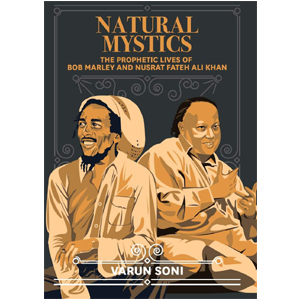 Dr. Soni was the first Hindu Dean of Religious Life at a major American university and, for many months, I met him almost weekly to talk about recurring questions about my own spiritual growth. My conversations with him inspired me to rediscover my roots, and also to educate myself by greatly expanding my reading of history and different world religions. He encouraged me to see connections between different faiths and, much to my delight, I discovered a book titled, “Natural Mystics: The Prophetic Lives of Bob Marley and Nusrat Fateh Ali Khan,” which Dr. Soni had written based on his doctoral dissertation. Fascinated, I pestered him with many questions about Nusrat. My love for Nusrat and the influence of my conversations with Dr. Soni, as well as my reading of his book, expanded my interest in world religions and I learned Arabic, and later Urdu, Hindi, and Punjabi. I also studied courses in Iranian history, Armenian history, early Muslim empires, and worldwide genocides. Now, I am teaching myself how to write shayari, the Urdu poetry.

According to Dr. Soni, “Nusrat worked really hard to be a unifier. He sang in so many languages—Punjabi, Urdu, Farsi, Arabic—that people felt a personal connection, they felt he was singing to them. Through his identity as Punjabi, he was able to reimagine the boundaries of the Punjab province so that they matched the region’s diverse cultural heritage, rather than today’s partitioned politics. He sang songs that represented the province’s diverse population, which included Guru Nanak, Mira Bhai, and Sufi poets in ways that emphasized unity.”

Nusrat’s role as a cultural unifier largely shaped my thoughts about the Partition of India and Pakistan. When I listened to Nusrat, I did not care that he was from Pakistan and that I am an Indian. The culture, the musical style is entirely the same.

As far back as I can remember, I have frequently thought about my family who fled Lahore and Multan at Partition, as they were on the “wrong side of the border.” Some of my father’s distant relatives remained in Multan and converted to Islam while the rest moved to New Delhi. The divided families lost contact and never met again. In 2015, my mom and I visited the Wagah border in Punjab, the dividing point between Amritsar and Lahore. While my mom patriotically stated, “I’m so glad I am on this side of the border,” I said nothing and looked longingly at the other side which my family had once called home. I just sadly thought, “We are all people of one country, one culture. Why did the British have to do this? Whose fault was it?”

On the 50th anniversary of Indian independence, Nusrat and AR Rahman attempted to ease the hostility between the two nations by bringing Indians and Pakistanis together in a joint Independence celebration. Dr. Soni describes in his book how the two of them sang “Gurus for Peace.” The song’s soulful theme reflected the power of music to bridge geopolitical divides as the lyrics cried out, “Why are you waiting for another day, another talk/ Somewhere we have to find a new way to peace.”

Nusrat’s lyrics of religious tolerance, combined with my Hindu upbringing, instilled in me a love and curiosity for all world religions. The part of Dr. Soni’s book, “Natural Mystics” that most resonated with me was when he describes the song, “Saanso ki Maala Pe,” “On the Rosary of my Breath,” and explains how Nusrat describes God in the form of Hindu Vaishnavism as both Rama and Krishna. The lyrics include, “Only Rama knows my love’s mind,” and “I blend with Shyaam (Krishna) himself.” Another song, “Ni Mai Jana Jogi de Naal,” translates to “I want to go with the Yogi.” Based on an old film, “Heer-Ranjha,” a woman, Heer, yearns to travel with a Yogi, again communicating religious transcendence and unification.

Influenced by Nusrat’s music, I have adopted a similar Sufi-like mentality and I view all religions as roads to the same destination. As an Indian, I became especially fascinated with the diverse religions practiced by India’s population, something which is not seen in other nations. When I go to India, I am keen to visit neighborhoods which are home to concentrat-ions of minority religious groups. In Mumbai, I wanted to visit the majority Parsi neighborhoods; and in Delhi, I was most enthralled with the Nizamuddin Dargah and the throngs of white-clad Muslim pilgrims.

Nusrat was a pioneer in sharing his homeland’s lively musical traditions with people from different walks of life. Dr. Soni mentioned, “While most Sufi singers just sing in Dargahs, he sang in movie theaters, homes, Gurudwaras, Hindu temples, and weddings.” Nusrat’s interest in crossing national boundaries led to a collaboration between him and an icon of world music and MTV award winner, Peter Gabriel, with whom he co-produced the song, “Passion” for “The Last Temptation of Christ.” Along with Eddie Vedder, the lead vocalist for the American rock band “Pearl Jam,” Nusrat Fateh Ali Khan created “Long Road Song,” in “Dead Man Walking,” an award winning 1995 movie about a prisoner on death row in Louisiana.

Since pre-school, I wanted to share my Indian heritage with my non-Indian friends and classmates. In elementary school, I loved entertaining my Caucasian peers with traditional Hindu bhajans and “Jana Gana Mana,” the Indian national anthem. Among the most memorable moments for me are when I recited the Gayatri Mantra for them, and they were extremely amused with the sounds of the words I used. A few years later, as a teenager, I befriended a boy who shared my interest in world religions. After a long process, and many failed attempts by my Dadi, my paternal grandmother, I taught him the Gayatri Mantra. Sixteen years later, he recites it perfectly, and recently shared it with his yoga teacher.

Listening to Nusrat as a child was to shape my future train of thought as an American of Indian origin.Nusrat’s inclusive, soulful lyrics instilled in me the principles of South Asian unity despite the region’s artificially drawn borders. I proudly see myself as a citizen of the world, because despite religion, langu-age, and culture, all of us are the same people, and we can all learn from one another. As an Indian American, I receive immense gratitude when I introduce Westerners to the customs and values of the East, while simultaneously adapting to the nation where I was born and raised. During these times of racial and religious division, Nusrat’s messages of tolerance should be heard and heeded around the world.

Nikhil Misra-Bhambri is a freelance journalist living in Los Angeles, California. He graduated in history from University of Southern California (USC) and writes about relationships between cultures, cuisine, music, and history. 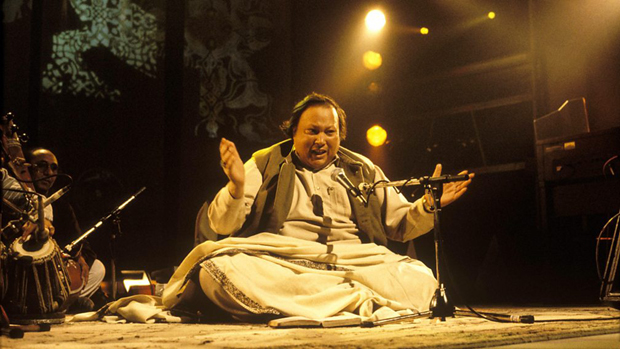