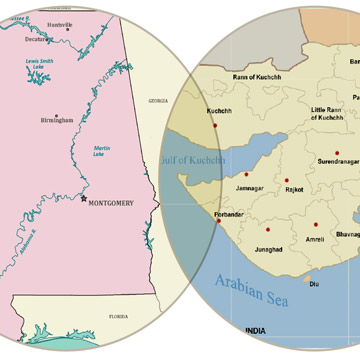 In the past, Gujarat and Alabama had voted solidly in favor of the parties of Modi (BJP) and Trump (GOP), respectively. Indeed, the states were party strongholds: in the national elections, Trump had won by around twenty points, and Modi had swept Gujarat.

Nevertheless, in both India and the U.S., disillusion has set in with the leaders, both deeply divisive and known to raise tremendous emotions on the part of their supporters and detractors. Now, the daily barrage of stories that cause many to flinch have taken their toll. In India: the callous killings related to the beef ban, the reactionary censorship of textbooks and literature, the deepening of fractures among communities and a leader who has not attempted to right the discourse. In the U.S.: the spewing of presidential tweets that veer between the buffoonish and the maniacal, the exhaustion from poorly-thought-out and sometimes dangerous policy roll-outs. And so, as 2017 drew to a close, in November and December, voters in Alabama and Gujarat delivered clear warning shots. Although the BJP still won in Gujarat, its margin of victory was so small that a message was conveyed. Of course, in Alabama, the Republican candidate Roy Moore, riddled as he was by molestation accusations and controversy, lost—the first time a Republican Senate candidate lost in over twenty years.

The results show an electorate in both countries that is increasingly troubled and skeptical, and they portend more change in elections to come. In both states, marginalized minorities played an outsize role in causing the upset. In Gujarat, Dalits, who have seen an uptick in acts of discrimination and hostility in many parts of the country, banded together and wielded their might. In Alabama, black voters came out in the kind of strength not seen even during President Obama’s election, and made the difference. In both cases, the minorities were aided by principled voices that, in the case of Alabama, cut across party lines. The result has been a resurrection of the fates of two political parties hitherto written off in these two states—the Congress and Rahul Gandhi redeemed themselves by a stronger-than-expected performance in the land of Modi, and the Democrats in ​Alabama have been resurrected after decades of insignificance. Even though Roy Moore was a fatally flawed candidate dogged by serious molestation allegations, for Democrats to win the Senate seat was huge. It means that they will now be able to build a serious infrastructure in a state where they thought they had no hope.

I do not know if these two upsets have long-term implications in the two states themselves—after all, Gujarat is Modi’s own home and Alabama is still a Republican state. But I do think that the cracks are now showing in India and the U.S., and that the winds of change may be coming. Three years of BJP rule in India do not seem to have delivered meaningfully to the poor and vulnerable, and they are now starting to look at their options. Religious minorities, lower-caste Indians, and women have seen some of their worst fears realized under the influence of the more fundamentalist elements of the BJP and their allies, and they are giving Rahul Gandhi another look. Indeed, this may be the election in which Rahul came into his own. From being widely mocked as a coddled boy, he is now being appreciated as the voice of civility, decency, and morality in a country which seemed to have tossed those values out of the political sphere and sometimes out of life itself.

Indeed, these two elections and their unlikely outcomes have shown the limits of the influence of Modi and Trump, two polarizing leaders who nevertheless seemed to have been able to draw voters to their cause despite everything, and seemed like they were here to stay. This is not necessarily the case any longer.