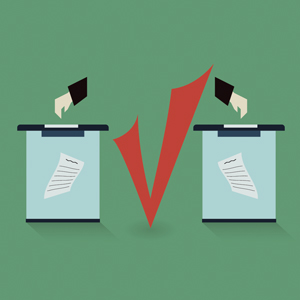 In the last decade, notes TINAZ PAVRI, both India and the U.S. seem to have moved to a new political plane, shedding the presumptions and givens of the past. What remains unchanged is the shared commitment to democracy, which includes holding fair elections and accepting results that are unpalatable to the losing side of a highly divided electorate.

I left India for the U.S. before I could vote, but as a student of Political Science, was intensely interested in the electoral process throughout. My family, though not overtly political, always viewed voting as their civic duty, and I remember my father proudly brandishing his index finger inked with the indelible mark that indicated he had indeed exercised his right as an Indian citizen.

In the late eighties, the Congress was playing out its last act in India, but in the decades prior, India had been firmly in its grasp. India had emerged from independence as a vibrant democracy, but a one-party, dynastic democracy in which the Nehru-Gandhi family was writ large. Elections were fueled by the cult of personality, with Nehru, the “father” of the nation succeeded by Indira, the “mother.” Election rallies were huge and raucous, life-size posters of candidates leered and hovered from billboards, and many an election was won by the Congress because people saw no viable alternative. In 1975, Indira Gandhi declared a Constitutional Emergency, and opposition politicians were silenced and jailed. I remember the fear that prevailed, the kind that infuses the everyday lives of citizens in authoritarian countries, but was very new and unwelcome for us Indians. In 1977, Gandhi inexplicably called new elections, and a non-Congress government led by the Janata party was swept to power. Even though short-lived, this change of party and power was of immense importance to the maturation of Indian democracy.

When I came to the U.S., I learnt the workings of a two-party Presidential system which left no room for smaller and ideologically different parties. In the early nineties, the Democratic and Republican party platforms shared much in common, meeting at a shared middle ground on many economic and foreign policy issues. Missing in the political and electoral process were the ideas, notions, histories that smaller and more politically diverse parties bring in their wake. While I saw the strengths of a presidential system—checks and balances, greater stability, I also saw the holes a parliamentary system would fill—a voice for smaller parties, coalitions that at their best help bring moderation and inclusion (but of course at their worst result in complete governmental paralysis or instability).

The explosion in social media today has resulted in everyone feeling that their opinion is in fact the only one that should prevail. Whereas before, personal politics were more quiet and thoughtful, they now seemingly need to be screamed, shared and posted at every turn with self-righteous fervor. This has resulted in a fraying of the shared democratic understanding in both countries—an implicit belief that even though one didn’t share the other’s views, one respected one’s opponents’ right to hold it and vote on it. It has created a hyperpartisan chasm that is difficult to suddenly overcome once the elections are over and the country needs to be united, and it bleeds into the inter-election period as well. And where once politicians—at least the great ones—were the ones to resist facile divisions and name calling, this is now all par for the political course.

As acts of terrorism grip both countries and the world, people have become divided within themselves and voice these divisions openly without consideration to how they affect other communities. In India, the secularism that has held sway since independence has suffered a blow by the insertion of religion into politics in ways that have been embraced enough to propel new political forces to power. We seemed to have all been Indians in the India of my childhood, but now to be nationalist, one seems to have to embrace the dominant religion or ideology. In the U.S., the exponential rise of minorities in the new millennium and their hewing to the Democratic party has created a sea change in electoral politics, and one that leaves a bitter taste in the mouths of some.

And yet, despite troubling new political developments, the act of voting in a (mostly) free and fair election continues to bring awe and pride to the citizens who live in a democracy. In the U.S., many of these citizens, Indian-Americans included, are relatively new immigrants. In the act of voting, we are simply Americans: a democracy (American democracy, in this case) guarantees this.