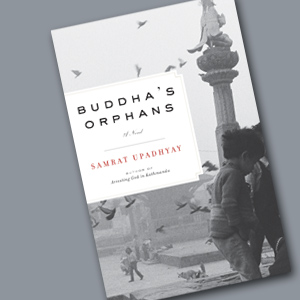 Born in Kathmandu in 1963, Samrat Upadhyay views the West through the eccentric pigeonhole of hippies and Jesuits, the Grateful Dead and the missionary teachers of the St. Xavier School, his high school.

“Americans from the Midwest,” said Nepal’s most acclaimed writer.

“Where you wound up,” he was reminded.

Upadhyay laughed at his end of the line in Bloomington, Indiana, where he heads the Creative Writing Department at the University of Indiana. A Nepali with Midwestern karma.
Perhaps best known for his short stories (a San Francisco Chronicle reviewer called him a Buddhist Chekhov), Upadhyay is also the author of two novels, The Guru of Love, and the newly published Buddha’s Orphans (Houghton Mifflin Harcourt).

As a writer of fiction, he shares a crucial characteristic with contemporary Indian novelists such as Rohinton Mistry, Vikram Chandra and Anita Desai, all of whom he admires: a penchant for raising storytelling above all other aspects of novel writing.

“In my case, the influence, to some extent, was Bollywood movies, which tell such grand stories. I am moved by a writer like Dickens, who also tells grand stories, those emphasizing the human condition. There is beautiful language, but the focus is not merely on language itself. There is a sense of expansion into the external world, as opposed to navel gazing, which to a certain extent can characterize some of American fiction.”

The son of an administrative officer in the Agricultural Development Bank, Upadhyay often populates his stories with middle-class Kathmandu bureaucrats. When he was fourteen, he ran away from home with the intention of making his way to Bombay and watching all the movies he wanted without anyone pestering him. He has traveled a lot in North India, speaks fluent Hindi, and attributes reading the commercial Hindi novels his mother read when he was growing up, as being part of the mysterious mix that turned him into a writer.

One of the scenes in Buddha’s Orphans that is taken from Upadhyay’s adolescence, and embellished, is when Raja, his main character, infuriates King Mahendra’s palace guards with his mock salute and his audacity in singing the Nepali national anthem “like a cry for help.”
The author admits to having had to suppress the urge to “laugh out loud or to wink subversively” as he went past them. “It was more youthful disregard than anything else. It was not politically motivated, as in Raja’s case.”

He was not raised as either an anti-monarchist or a pro-monarchist. His household was neutral on the matter. The monarchy was a fixture, part of the Nepali landscape. The future critic of the monarchy (and the Maoists) recalled his horror at hearing the monarchy attacked for the first time. “The guide who took me to see this swami in the hinterlands of western Nepal was fervently anti-king. He used obscenities when he spoke of him. I was shocked. It was my first indication that there were people who were extremely unhappy with the king.”

The monarchy, with all its pomp, power-hoarding, and ultimate self-destruction, provides the background for Buddha’s Orphans, essentially the love story of the orphaned servant boy, Raja, and the well-to-do Nilu that spans nearly half a century and seems at times to be the spawn of Dickens’s ghost.

The novel begins with a newborn baby left on the Tundikhel parade ground of Kathmandu by his mother, who then drowns herself. Raja is saved by Kaki, a poor corn seller, afterwards a servant in the house of Nilu’s mother. The boy is then snatched from Kaki by the middle-class bureaucrat, Ganga Da, because his presence comforts his insane wife, Jamuna. In the spirit of
Dickens Raja is given a good home and sent to a good school.

“I think I must have been influenced by Oliver Twist at some point. But also I remember watching an old Bollywood movie starring Raj Kapoor. Raj Kapoor was playing a vagrant, a homeless orphan. So that entered into it too.”

Like The Guru of Love, Upadhyay’s first novel, Buddha’s Orphans, is a book about abandonment. In Guru, abandonment takes the form of marital infidelity. In Buddha’s Orphans, it is multi-layered. Raja, a young man of Brando-like brooding, abandons Kaki who longs for him. Nilu, abandoned by her alcoholic mother, emotionally deserts Raja after the death of their young son Maitreya. And Nepal, as always, is abandoned by her rulers, whether under monarchy or democracy.

The arduous workings and workings through of karma lie at the heart of this story, which coalesces as a kind of fable about a family brought into being by an unknown and unseen young woman, impregnated and deserted by a young man whose blind act ultimately results in a profound unity of lives.

The catalyst for this unity is Ranjana, Raja and Nilu’s daughter, at once modern (an anthropology student at Northwestern) and ancient (an anthropologist of karma).
Haunted by the brokenness of her grandmother’s life, she takes it upon herself to shed her student life and wrestle with the drowned woman’s pain, to flirt with her karma. Quite different from, but in one way similar to, Jacob wrestling with the Angel. Similar because she comes away with a blessing.

Upadhyay traces the presence of strong female spirits in his story (Nilu is another) back to his mother, a “first-class” official in Khadya Sansthan (the Food Corporation), and in her home a woman of equal rank with her husband. “I don’t normally think of women spirit figures in a conscious way. But there is a strong tradition of women spirit figures in Hinduism and Buddhism.”

His role, culturally, is precarious. In the opinion of some, belonging to two worlds is the same as belonging to none. “In general, there has been a deep suspicion in Nepal of Nepali writers who write in English. It means you are Westernized to a certain extent, you don’t know the Nepali reality. I am a good target because I actually live in America and write about Nepal.”

But he has his admirers back home, those who are happy he is successful in the West, happy he has put Nepal on the literary map of the West. He conceded that even those in his country who read him and like him raise questions about aspects of his work. “Some readers feel that I present Nepalis in a very sexualized way,” he laughed.

The author arrived in America, in Cedar Rapids, Ohio, the heartland of America, in the Orwellian year of 1984. A scholarship to Coe College brought him to Cedar Rapids.
“It took some time to get used to the isolation of small-town America after the bustle of Kathmandu.” The College of Wooster (Ohio) offered Upadhyay an even better scholarship, and it was there that he graduated with a B.A. in English.

Arresting God in Kathmandu, the book of short stories by which he is probably best known, came out while he was teaching English and creative writing at Baldwin-Wallace
College in Cleveland from 1999 to 2003. The quietly told stories in this book are of ordinary, urban, middle-class Nepalis seen through the magical lens of deep, uncluttered insight.

Was he not tempted, I asked Upadhyay, given that Nepal is a country that has recently undergone a period of terrible political violence (and is currently in the throes of great political insecurity), to alter his writing so that it might reflect the extraordinary rather than the ordinary reality of many Nepalis?

There was a long silence. “There are many factors involved here,” he said slowly. “I am aware that I have been labeled as someone who represents Nepal for Westerners. On the one hand, I resist it. It can be damaging because it leads to certain expectations from one as a writer. But at the same time, it is also a responsibility. Resistance versus responsibility. Part of me says, ‘No no no!’ I will write what I want to write. The other part says I need to address what is happening in Nepal. I think The Royal Ghosts (his second book of short stories) is a response to that. It came out of my shock at the Maoist movement combined with the Royal Massacre.”

When Upadhyay goes back to Nepal, he finds nothing has changed. The corruption is still the same. The lack of progress is still the same. The only difference is that the Maoists are now in the government, not roving the countryside. “You hear some people murmuring that maybe the monarchy wasn’t so bad after all,” he said.

In Buddha’s Orphans, Upadhyay was able to take his world of domestic chaos and bring forth sanity from it. Nepal has not been so lucky.