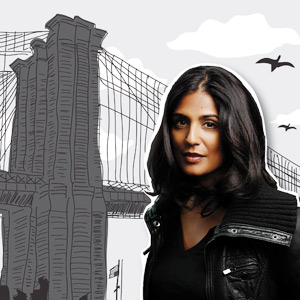 Mira Jacob, author of the novel A Sleepwalker’s Guide to Dancing, hit a nerve with her second book, Good Talk: A Memoir in Conversations (One World). This graphic memoir has its origins in Jacob’s 2015 viral illustrated essay for Buzzfeed, “37 Difficult Questions from My Mixed-Race Son.” Jacob, who is married to a white Jewish man, spoke to Khabar when she was in town for the 2019 Decatur Book Festival.

In her Buzzfeed piece, Jacob’s 6-year-old son asks questions about Michael Jackson’s race and the 2014 police shooting death of unarmed teenager Michael Brown in Ferguson, Missouri. This scene, which examines the complexities of racial identity and trauma, open Good Talk. And this is just the beginning. Good Talk fearlessly tackles everything from interracial relationships, arranged marriage, Trump-supporting in-laws, racial microaggressions, and the kind of colorism that deems Jacob too dark for a good Indian marriage. What Jacob achieves in deceptively simple speech balloons and illustrations gives rise to a potent narrative about the very same forces that plague the U.S.’s current socio-political landscape.

What led you to write the book?
I started to write an essay about my little boy, age six, trying to figure out race and racism in this moment that has only been a Black and White America, in an America that never sees the rest of us.

When I thought about writing an essay about how my son was coming to understand racism, all I could do was picture the comment section in a publication. The comment section is brutal. It finds a way to lampoon anything a writer puts out that is real. So instead of writing a prose essay, I wrote this visual essay for Buzzfeed.

Was your agent supportive of you writing a graphic memoir?
To her credit, my agent told me long before this essay that I should draw a book one day. When I would turn in manuscripts, there would be doodles in the margins. If I can’t figure out how a scene works, I draw it.

But I realized that drawing by hand for an entire book would take too long, so I learned how to draw it using Illustrator on a computer, with a stylus.

What was that like?
Paper has a personality—there’s friction there, and part of the emotion is translated by the friction. So during the first seven months [when] I drew with a stylus, I was trying to figure out how to get my personality into those lines. 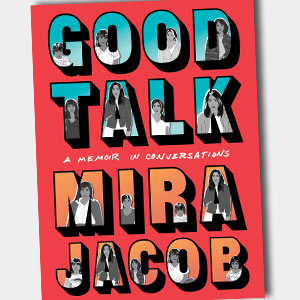 Can you talk about the style you used to illustrate the people in the book?
The people look like paper dolls. Their expressions never change. So I change people from year to year, as they age. But the actual facial expressions for a particular character at a specific age stays the exact same.

How did your editor feel about this?
My first editor didn’t love it. He said it would be great if I could draw a crying face, or maybe a tear. He thought it was very uncomfortable to be watching these very intense conversations in the book and not see the characters physically react.

I’ll be honest, I didn’t even notice that the characters’ facial expressions stayed the same when I read the book—their expressions felt so raw and full of emotion to me.
Here’s why—because if I don’t make the character cry, then you, the reader, don’t wait for the character to emote, and then you have to hold the emotion. It’s effective in the really painful moments, like when my son asks if his daddy is afraid of us because we are brown. This was part of a whole process of experimenting and finding the right language and I knew very early on that if I don’t move a muscle in those faces in the book then the reader has to imagine the emotion.

The facial expressions also remind me of my own, when someone says something racist and I freeze. My face shows no emotion. I’m too stunned and shocked, so I wear a poker face. I can never come up with the right response in the heat of the moment.
Right, you don’t have the right answer, you don’t have the pithy comment. You just eat dirt. You fold yourself in all the ways you need to fold yourself to survive the moment. And it’s so sickening to have to do that.

People have asked me whether I’ve experienced racism. And after I told them a story, without fail, their reaction was, “Um, but you know there’s another way to really think about that?” And what I realized after a while was that they wanted me to tell the story, so they can tell themselves that racism doesn’t exist.

What do you do with that? How do you deal with an America that has an insatiable appetite for racial pain, and when you hand them your racial pain, the only thing they’re going to do with it is say that it doesn’t exist.

When I remove the expressions from the book’s illustrated faces, I don’t perform. And I don’t ask for others’ sympathy. I just write down the thing that happens. And readers just have to feel it.

You also talk about how difficult it is for you that your in-laws voted for President Trump.
Going to their house is an exercise in humiliation. And my son will be damaged by the fact that his grandparents voted for a racist. They voted for a man who is openly racist. And they tell themselves that he’s not.

How does this affect your relationship with them?
I love my in-laws. I really do. I think they raised this incredible man, my husband. They gave him really good values. So it’s been incredibly painful for me that despite raising their son this way, they abandoned me. And they abandoned my son. And they would never think that, because they can’t even get their heads around the fact that he’s racist.

The book is broken down into several very short scenes. It makes the very intense subject of racism more digestible. Was this your intent?
I knew that nobody in America wanted to talk about racism anymore. Not us. Not them. Nobody wanted to talk about it across racial lines. We all wanted to go into a room and only talk to each other. I also knew that this form was irresistible. I get letters from readers who tell me that they were only going to read two pages but ended up reading the whole thing.

I fell in love with the person I fell in love with. No one ever talks about the real business of being in an interracial relationship. It’s a moment in which everything you’ve learned about a white patriarchal country shows up in your own marriage and comes between you and the person you love most in the world. And you have to somehow soldier through it together. That’s real.

And it’s complicated. Issues of race and racism are complicated even within our own South Asian community.
The thing that breaks my heart is South Asians aligning themselves with whiteness and white supremacy, to the peril of people of color all around them. They will align themselves with a system in which they will never be considered fully human, one where they will never be recognized as a whole person, where they will always be considered a little less-than. They’d rather align themselves with that system than break the system itself.

The book has received some wonderful reviews and press. Can you talk about its reception?
The single greatest thing about this book has been how many interviews I’ve done with women of color, and how smart those interviewers are. When I’m being interviewed by a white interviewer, they see this book as a referendum on whiteness and Trump. I tell them that’s not what it is. I wrote the book to talk about brownness. This is a book for people who’ve never felt seen.

Anjali Enjeti, an award-winning journalist, teaches creative writing in the MFA program at Reinhardt University. She is the vice president of membership for the National Book Critics Circle. Her collection of essays on identity and social change is forthcoming from the University of Georgia Press.