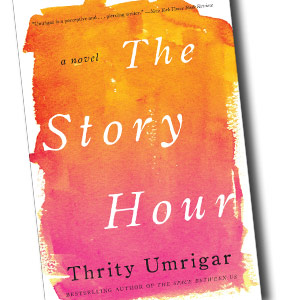 Thrity Umrigar’s latest novel, The Story Hour, is about the power of dialogue and exchange involving two people who are separated by class, race, culture—and how that simple, everyday act has the potential to transform lives. Umrigar, author of The Space Between Us and other novels, spoke to Khabar when she was in Atlanta for the Decatur Book Festival.

In The Story Hour, Lakshmi, a recent immigrant to the United States, languishes in a loveless marriage to Adit Patil, a restaurant owner. Drastic attempts to change the course of her life fail and she starts seeing Maggie Bose, an African American psychologist married to a Bengali professor of mathematics. Maggie is at once taken by Lakshmi’s story and develops a bond that’s deeper than one between doctor and patient. Lakshmi opens up to Maggie, and Lakshmi’s storytelling in turn unleashes some of Maggie’s angst. Umrigar’s strength as a novelist lies in her ability to maintain almost parallel story lines of two female protagonists and yet tease out those commonalities that transcend race, class, and language in Lakshmi and Maggie. Lakshmi’s voice is rendered in broken English, a choice that Umrigar stuck to despite initial fears that it may turn off readers. South Asian readers may or may not be able to relate to this voice, and the inchoate sentences and imprecise grammar may prove too onerous a task for some. Notwithstanding this deliberate choice on the part of the writer (and the editors, one must add), the narrative is brisk and plot driven. Lest the reader despair that a novel mostly set in the office of a shrink might leave one emotionally drained, there are enough conflicts, plot twists, and healthy doses of melodrama to The Story Hour, making it a very enjoyable read.

In the panel discussion [in Atlanta], you talked about how each book of yours poses one central question. What was that central question for you in The Story Hour?
Perhaps the central question in this book is the power of storytelling to transform lives, to change lives. And I wanted to explore if that’s really true. Is there something inherent in the act of telling your life story to another human being that transforms both people? And this book is funny in the way that not only do we see Lakshmi getting transformed the more Maggie gets to know her and she starts reshaping her own central narrative, but also the book itself mimics that because in a sense Lakshmi is talking to us—her sections are told in the first person—and every once in a great while you get this little clue where she says something like, “You don’t know what this means? I tell you.” Who is she telling that to? You are sort of seeing the act of telling in the book, it’s like a talking book, in that sense. So, I guess for me that was the thing I was keenest on exploring.

You’ve talked about how you started writing at the age of 5 or 6. So what is your advice to people that perhaps did not write at 4 or 5 or 6?
This is a question that comes up in book talks all the time. Somebody or the other from the audience will always stand up and say, “You know, I have this great book in me, it’s a wonderful story, I always wanted to tell this story, I just don’t have the time.” In the beginning, when I was starting out doing these book talks, I was a much nicer person, I think. I would make the right sounds and sympathize with them. These days I just don’t. What I am saying is, not everybody has to be a writer, just like not everybody has to be a plumber. You can go through life perfectly well and happy without ever fixing a plumbing problem in your own home. Same thing with writing—you don’t have to. But if you are one of those crazy people who feel like something is missing in their lives if they don’t write, then do it. And as for not having the time, nobody has the time; you make the time. It’s like anything else in your life; if it’s of value, you will sacrifice something else to do it. I didn’t watch TV, I don’t know for how many years.

You’ve written about how, as a child, you were acutely aware of poverty and inequality in the social order in India. How does writing allow you to express that from a social justice perspective? And, related to that, is it hard to reconcile having to live in the U.S. and writing about that?
Today, I feel like the best use of what little talent I have is to process the world through writing. And if that can touch somebody’s heart, that’s good. I remember many years ago I was at a book event and this young Indian woman who was only in the U.S. temporarily came up to me and said, “Can I speak to you privately after we get done?” And she told me this story about having a maid. Every day, she said, a little bit of the milk was missing. At first she was puzzled. Long story short, she caught the maid drinking it or taking it home or something like that. And she said she fired the maid. Because, she said, she couldn’t imagine having a thief—that’s the word she used—working in her home. Then she read The Space between Us and she just started crying. She thought, “I understand now why this woman was stealing from me.” And this is by way of confession, right? And she said, “You have changed the way I look at this situation permanently.” That [book] was powerful for her, but it’s powerful for me, too.

Does it feel hypocritical to be living in the U.S. and writing about India? It doesn’t. India is still very close to my heart and very dear to my heart. My formative years were in that country and I feel—and maybe I am wrong—but I feel like I still understand that part of India that is timeless. I clearly am not in the loop of what the latest fashions are, or even the latest movies, or the music. But frankly I am not following those trends in the U.S. either, because those trends will come and go. And as a writer, I am drawn to the things that are timeless. The thing that is ultimately timeless is human connection.

Could you talk about how your journalism background helps with your fiction writing and how you made the switch?
The second part is easier. I made the switch because I had my first novel Bombay Time published while I was still a journalist. I had gone back to school and gotten a Ph.D. So the combination of those two helped me get a job at Case Western, which is where I still am. It was supposed to be a one-year appointment; I was filling in for the fiction writer who was on sabbatical for a year. But they liked me and I liked the department and we made it work. And ten years later, I am still there. So that’s how that happened.

Journalism, I think, was great grounding for this career, because the discipline of writing every day, the sheer practice of pounding out a certain number of words every day, every week for years together, I think it changes you. I am a fast writer, even when it comes to my fiction. And I can’t help but think…it’s like that theory of you do anything for 10,000 hours, and you become good at it. And clearly it’s a different kind of writing but I was always interested more in literature than in journalism. Even as a journalist, I mostly did long form journalism, I did a lot of human interest stories, I did a lot of personality profiles.

Could you talk about some of the contemporary writers whose works you enjoy reading? Your blurb on your university page talks about how you encourage your students to read about people who write about the times they live in.
Luis Alberto Urrea. He is somebody that I admire a great deal, both for his nonfiction and fiction. He writes about life on the border with Mexico. He is of Mexican ancestry, so he sort of straddles both worlds successfully. I think Junot Diaz is somebody else that I enjoy quite a bit. Toni Morrison, of course, but you almost don’t even have to mention her anymore because it’s like who doesn’t like Toni Morrison? Alice Munroe, who I think is probably one of the best short story writers still alive. Amitav Ghosh, I think he’s fantastic. Salman Rushdie, of course, is always near and dear to my heart. Rohinton Mistry I like quite a bit.