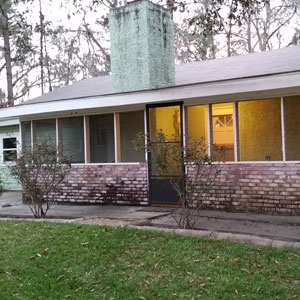 Supersize it! That quintessential American mindset is certainly alive and well when it comes to the houses of successful immigrants. Thousands of square feet and three-car garages seem normal in our quest for “keeping up with the Patels.” Inspired by her years in India, the author, however, makes a case for smaller abodes.

As a first generation Indian-American, I was accustomed to my family’s big American houses. In New Jersey in the 1960s, we had plenty of room for the relatives arriving from India who stayed with us until they could get settled in America. We even held weddings for them. In 1975 we moved to a 2,200 square foot split-level in Ohio, but by then it was just my parents and my brother and sister and me, since most of our extended family remained back East. Although this house was beautiful, at times I felt like we were living in a great empty hall.

Wikipedia reports that an urban Indian has an average of 117 square feet to live in, and with the typical 5-person Indian household, that translates to a 585 square foot residence for everyone. And most of these are 2-room houses—the living room which doubles up as a bedroom, and a kitchen! In contrast, according to the U.S. Census, the average American house size is 2,310 square feet for the usual 3-person household. At 770 square feet per person, one American lives in more space than a whole family in India.

When we had moved to Calcutta in 1979 for my father’s two-year corporate assignment, I experienced a cultural awakening at eighteen. While we lived in an expansive company-paid flat in Ballygunge, my friends had the more typical middle-class dwellings in India: a living room, two bedrooms, one bathroom, no dining room, a dark little kitchen. The furniture was sparse, but there was always original fine and folk art to be seen in these homes. While there was less privacy than I was accustomed to, the close quarters drew the family into the common areas for conversation. Another striking advantage of the small houses was that people got outside more instead of holing up inside like Americans did even back in the 70s. 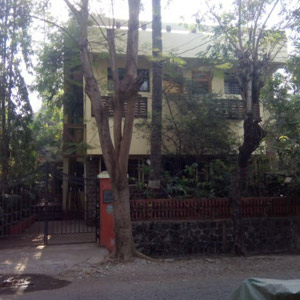 Eventually my parents retired to their hometown of Kolhapur in Maharashtra. Whenever I visited, I accompanied my father to his friends’ houses, all smaller than my parents’ own big two-story retirement residence. One lovely family, headed by Dr. Pawar, a history professor, and his artist wife, lived in a charming house with a small living room and a kitchen on the first floor, as well as two little bedrooms. A narrow staircase led to his tiny study lined with books inside and outside the room. In an alcove among the books, a single overhead light illuminated an oil painting.

There is a humane, gentle scale to Indian home life.

That house inspired my own decision to live in a smaller home than usual for America.

In Savannah, my husband Marty and I live in a 1,490 square foot ranch house—modest by American standards, yet quite spacious from a global perspective, let alone an Indian one. It has three bedrooms and two baths, and a kitchen with an eating alcove. One oddly shaped room with a laundry closet became my study, and we unfold a banquet table to convert it to a dining room as we need. In fine weather we entertain in the backyard.

This is the little house where we brought our daughter Usha home from the hospital, and in the ensuing twenty-two years we have also had either a family member or a friend live with us, staying in one of the bedrooms that had previously been Marty’s study. At times it felt a bit crowded, but overall I think we are close as a family because we were physically close. There was no hiding in a vast bedroom on an upper floor far from the rest of the house. Instead, everyone ate dinner and talked in the kitchen, and afterwards Usha and Marty and I went to the living room to read or watch TV. In addition, I believe that the small size of our house kept us from nesting there. Instead, our family was involved with Savannah: volunteer work, classes, entertainment, and socializing.

We have less furniture than most people because the house feels more spacious that way. However, we have room for original art created by artist friends, but mostly by Usha, who had taken years of art lessons and had attended Savannah Arts Academy, a magnet high school for the arts. My own small study with its wall of books, along with paintings and drawings, is my interpretation of the historian’s office.

With Usha off to the University of Georgia to study art history, it’s just Marty and me left at home. With 745 square feet for each of us, we are back to the average American per capita living space.

Do I recommend living in a house like mine? Yes, I do, and not only for frugality and the smaller ecological footprint. In this simple little house I retain the Indian values I learned at eighteen: a simplicity that fosters culture, grace, and family connection.