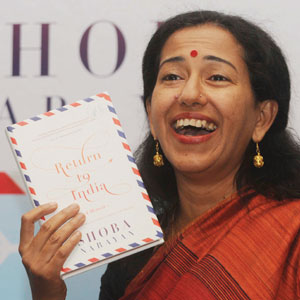 Shoba Narayan is living in India and loving it. Why did Narayan, a successful author who spent some of her “best years” in the United States, go back to her homeland—and what was her life like in this country? She has written about her experiences in a new book that was released in India recently. Another India returnee spoke to Narayan.

In her recently released second memoir, Return to India, renowned journalist and author Shoba Narayan poses this question to herself in a Shakespearean fashion, with an immigrant twist: “To be American or Indian, to return or stay?” She elucidates the challenges of an immigrant in America and the dilemma of wanting to return to the home country after living in the U.S. for almost two decades—a dilemma that every immigrant has probably faced at some point in her life.

Having made the trip to the homeland myself after living in the U.S. and encountering some of the questions especially as a parent, her book resonated with me on many levels. I decided to interview Narayan, partly to hear her unwritten thoughts and to validate my own experiences. Narayan, who has written for The New York Times, The Wall Street Journal, The Washington Post, and Time, won the MFK Fisher Award for Distinguished Writing. She published her first memoir, Monsoon Diary: A Memoir of Recipes, in 2003.

For decades now, young Indians have been attracted by the ethos of the American dream, in pursuit of a better life and better opportunities. Narayan, too, starts off her book by expressing her staunch desire to go to the U.S., partly wanting to escape the influences of a traditional South Indian upbringing. In her usual honest and humorous style, she pokes fun at herself and her well-meaning but conservative family who try to dissuade her from going abroad. The trepidation and joy accompanying the process of applying for and getting the student visa, and finally arriving in the U.S. with a sense of relief and excitement are familiar terrain to most Indian immigrants who have gone ashore as students.

She states that “the best years of her life” were as a student in Mount Holyoke College, her first home away from home, where she explored a variety of subjects such as music composition, cross-country skiing, and theatre, and experimented with new cuisines. At the same time, she faced the challenges of an immigrant student—living on a tight budget and trying to make ends meet by doing odd jobs. I ask her how living in the U.S. as a student helped her personally or professionally. She replies, “As a girl growing up in India, there were too many voices in the head—too many people telling what to do and what not to do. Living geographically away allowed me to find myself. It was a liberating experience. I think that everyone should have the gift of foreign education if they can afford it, to explore different cultures and open one’s mind.”

While she embraced all aspects of American culture at Mount Holyoke, it was when she moved to Memphis for a master’s degree that she chanced upon the concept of “straddling two cultures.” As she interacted with Indian families who had assimilated into the multicultural ethos of America at work but came back to Indian homes and socialized with like-minded Indian families, she also became aware of the apparent generation gap—what she terms as a “gaping hole” between India-born parents and their America-born children.

And it was after she started her own family (after an arranged marriage) when her daughter was born that the first conflict between Indian and Western values rose in her mind. She was worried about the mixed messages her daughter was receiving from her—her role as a traditional “Indian bahu” in front of the Indian uncles and aunts and an aggressive feminist in the presence of Americans. In a bid to inculcate Indian values, she even tried to assume a sartorial identity, wearing saris every day and taking her daughter to the temple, but the phase didn’t last long. Though her husband believed that it was possible to achieve the best of both worlds, she felt one couldn’t choose both. But aren’t there many Indians in the U.S. who are able to achieve a balance between the two cultures, I ask her. She replies, “Yes, certain Indian communities do seek out cultural experiences actively for their children such as Bal Vihar or Bharatnatyam classes, mostly in areas with a large Indian base. But it’s the little things that mattered to me—the familiar sights and smells of childhood, the social fabric in India that allowed a casual interaction between friends and neighbors, and the luxury of dropping off one’s kid at a neighbor’s or aunt’s place at short notice.”

Gradually, Narayan encountered the “moving to India” question as other young Indian couples discussed the booming economy back home and their plans of returning home. She had moved to New York by then and witnessed the chaos that ensued after 9/11. So, my next question to her is: Does she think that 9/11 played a role in Indians returning? After all, until then, very few actually made the journey back though the dream of returning home remained. Narayan pauses before saying, “I think yes. America never had a Department of Homeland Security before. It was unheard of. America had tightened its borders to outsiders. But then there was the recession in the U.S. which hurt or helped depending on who or where you were. And it was also the booming economy, the buzz of entrepreneurship in India that attracted people here.”

Eventually, after years of introspection and discussions, a job opportunity for the husband brought them closer home, first to Singapore and then to India. The book ends with the author and her family making the decision to move back to India. She doesn’t touch upon her experiences on returning home, but I ask her if the journey had gone as she had expected—did the children learn Indian values? She says, “It did not happen in a structured way as I had anticipated. But rather in a nebulous but organic way, through stories narrated by grandparents, watching Grandmother drawing kolams or breaking into a classical Carnatic song. Living in India makes you realize that you’re not the center of the universe, makes you selfless and forces you to think in a multipronged fashion. Here you learn to live with a certain lack of control. Besides, here I can walk into their school wearing a sari without causing them any embarrassment!”

Narayan says her book was in the works for about 10 years. This insightful and poignant memoir, with a basic theme of family, culture, and identity, is sure to resonate among all immigrants, those who are living abroad and those who have moved back. In the end, it is also the story of a person whose ideas and opinions change with the vicissitudes of life, but whose value systems remain the same.

After living in the U.S. and Germany, Deepa Padmanaban returned to India. Currently based in Bangalore, she writes about people, human rights, travel, education, and all things Indian.