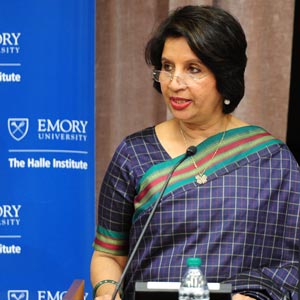 Indian Ambassador Nirupama Rao is not just a notable achiever. In a stellar career spanning almost four decades, she’s held some of the top jobs in the Indian Foreign Service. After giving a talk at Emory last month, she met with Khabar briefly.

“Madam Ambassador Nirupama Rao” was the correct way to address the visiting envoy, we’d heard, before her interview with Khabar at Emory University’s Goizueta Business School.

That honorific seemed a tad formal, not to mention forbidding, evoking the starchy world of high-level diplomacy. But in the room assigned for the interview, there was no cause for alarm, much less intimidation, although Ambassador Rao was flanked by Ambassador Marion Creekmore, a distinguished visiting professor at Emory, and India’s Consul General in Atlanta, Ajit Kumar. She had a welcoming smile and her manner was casual, accessible.

What’s formidable, however, about Ambassador Rao is her reputation, which preceded her arrival in the United States. No stranger to Washington, D.C., she served there in the early ’90s as Minister for Press and Cultural Affairs at the Indian Embassy. And as the first woman Indian Ambassador in China, she was stationed in Beijing from 2006 to 2009. What adds to the significance of this high-level appointment is China’s recent rise as a global power and the sensitivity of its relationship with India. Ambassador Rao also served as Foreign Secretary, the top job in the Indian Foreign Service, before she accepted her current position in Washington. Furthermore, she was the Indian Ambassador in Sri Lanka, Peru and Bolivia, while her other postings include Spokesperson of the Ministry of External Affairs, and Deputy Chief of Mission at the Indian Embassy in Moscow.

A topper in the 1973 batch of the Indian Foreign Service, Ambassador Rao, who received a master’s degree in English literature, has been a Fellow at the Centre for International Affairs, Harvard University, and a Distinguished International Executive in Residence at the University of Maryland. Her husband, Sudhakar Rao, is a fellow Indian Administrative Officer who retired as Chief Secretary of the State Government of Karnataka. 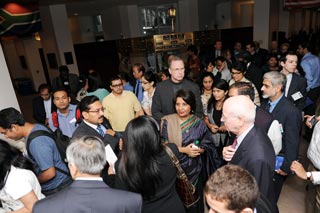 Following her talk at Emory, Ambassador Rao mingles with the audience.


In a life filled with extended separations from her family (the Raos have two sons), she rose to the top ranks of Indian diplomacy, becoming in effect an inspiring example to young women and men. Much is possible in today’s changing India—so not surprisingly, Ambassador Rao is bullish on her country. And she’s clear about her role in Washington, and the difference it can make. In her speech at Emory, she noted, “As India continues on its path of inclusive social and economic development, mobilizing the immense creativity and energy of its people, we see the U.S. as an important partner in this journey.”

One of the students downstairs asked [during the Q & A session after Ambassador Rao’s speech] about going back to India, about reversing the brain drain. Of course, a lot of us decided to stay back and become U.S. citizens. But we do have emotional ties to India. What can we do to promote Indo-U.S. relations?


A first step would be to spread the word about the importance of the Indo-U.S. partnership. After all, these are the world’s most important democracies—America is the world’s oldest democracy and India’s the largest, and this partnership is important intrinsically for both our countries, and for peace and stability in the world and for progress and development. When two democracies like ours work together in areas like education, energy, health or agriculture, it makes a difference to the lives of people. The fact that this partnership makes a difference—that is the message we need to get out.

You talked about the perils of protectionism. But because of the economic climate here, there’s been increasing opposition to outsourcing. And there’s also the political climate because it’s an election year. In-sourcing is becoming more popular. What is India doing to counter these negative reactions? For instance, are Indian companies creating jobs here? Could you elaborate on that?


Indian companies are creating value, creating wealth and creating opportunities here in the United States. I don’t think that story has been told sufficiently and I don’t think many audiences in the U.S. are aware of this. But the fact is there are many Indian companies both in manufacturing and services who have a presence here and have set up facilities here and employ people. There was a study recently in which they observed that the IT industry alone created 100,000 jobs in this country as of last year. And also indirect, ancillary jobs amount to about 280,000, of which 200,000 are with U.S. residents. That’s the kind of investment Indian companies have here in the U.S. economy and [that shows] how confident they feel in this relationship. That’s the message that needs to be stressed by all of you in the community when you talk about relations between India and the United States. We live in a world that is increasingly integrated from a business point of view and also the way people move back and forth. Both our countries have spoken in global forums against protectionism. That message should be consistently kept in mind and stressed.

You noted that as a diplomat you live in a world of ideas and meet all sorts of interesting people. Do you also get a chance to interact with ordinary Indian-Americans? I know you use Twitter.


I do interact with the general Indian-American population. I wouldn’t call them ordinary—every human being is special in my view. In the diplomatic service, I am here to serve as a public servant. And I do get to meet people who’re having difficulties and need assistance. I remember my time in Sri Lanka during my first tenure there. The ethnic problems were going on and there were large numbers of refugees crowding around our High Commission, seeking help with documents and so on. That was a unique moment in my career, communicating with people who worked in estates, understanding their issues. Diplomacy gives you the opportunity to address different audiences and relate to different kinds of people. That’s what makes it such a special profession. 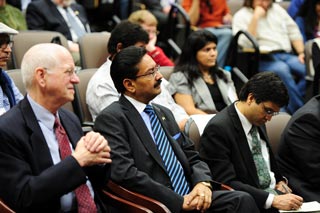 There seems to be some connection between diplomacy and writing. We have Vikas Swarup, Pavan Varma, Shashi Tharoor—so many diplomats who take up the pen. And you’re a published poet. Does it help you to de-stress? Would you pursue writing when you have more time?


I would definitely like to pursue it when I have more time. It opens up a new dimension for you. It’s very therapeutic, also. I’m very fond of music and writing. I draw a lot of sustenance from them.

I’ve heard you’re interested in opera. How did that happen, given that opera is not so popular in India?


We were a radio generation, so we listened to a lot of Western music on the radio. When I was growing up I didn’t have much exposure to Western classical music, but I always loved listening to it. My first posting was in Vienna, and the embassy was located just opposite to the opera house. I got to see a lot of opera and music and I think I began to be drawn to it at that time.

After Vijayalakshmi Pandit’s stint as the Indian Ambassador to the U.S. [in the late ’40s], we had a long string of male ambassadors. But recently, we’ve had two female Indian ambassadors to the U.S. in a row—Meera Shankar and you. Is this a signal of how India is changing, in terms of women rising to top positions, or is it premature to draw such a conclusion?


Women are increasingly coming into their own in India, and this is a measure also of how professional women are being recognized by the Indian government. You will come to see more and more of this in the years to come, because there is a climate of greater and greater acceptability in India for the role that women can play in development, in the bureaucracy, in government, politics, business and industry.

The Consul-General of India in Atlanta has talked about the merger of the PIO and OCI cards. What changes can we expect once this merger is completed? At this point there is some confusion about the process.


The intention is to just streamline the procedures and make them easier, not complicate them. Please rest assured that the government is doing it to make it smoother and possible for people of Indian origin to visit India without any difficulties, to invest in India, do business and to move back and forth with ease.

The Af-Pak issue seems to be a bone of contention in Indo-U.S. relations. Indian interests don’t always coincide with American interests. How are we cooperating to ensure that there’s greater security for India and America?


The basic aims that America has for Afghanistan are [the same as] what we want to see there. We would like peace and stability there and see that democratic institutions are strengthened there, and see a social transformation in Afghanistan as it moves forward. We are for empowering women there and against terrorism. There’s no conflict in both our aims for what we want in that region. 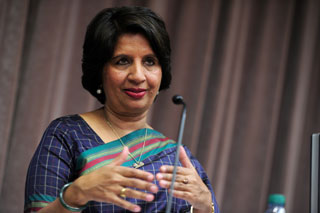 Many young Indian-Americans want to go to India to study, and even work there, these days. Do you have any advice for them? What should they prepare for, and what skills should they be acquiring?
They already know a lot about India, from the very fact of their Indian heritage, and from having been immersed in the culture and from what they’ve learned from their parents and grandparents. Many of them know the languages and are well-equipped to spend some time in India. When it comes to job opportunities, it depends on their own qualifications. I don’t have any special advice, but they already have an advantage because of their heritage. They’re able to relate to India in a way that enables them to settle into life there without any difficulty.