Movie Review: All Right in the End 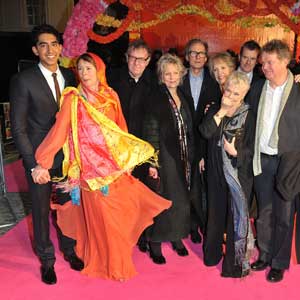 A stellar cast carry the movie with finesse. Some of them are seen here at the red-carpet premiere of the film in London.

Another movie set in “chaotic India” by a non-Indian filmmaker? What kind of clichés can you expect now, you think in trepidation. But when a movie is packed with a powerhouse cast that includes Judi Dench, Maggie Smith, Bill Nighy and more, you have to give it a chance. The cast also features Dev Patel of Slumdog Millionaire-fame and Lilette Dubey playing his stereotypical Indian mother.

We meet seven people who are embarking on a new phase in their lives: retirement. Recently widowed Evelyn (Judi Dench) has to sell her flat to pay off debts. Douglas (Bill Nighy) and Jean (Penelope Wilton), whose relationship is cordial at best, have lost their savings to their daughter’s internet startup, and are facing the prospect of living in undesirable quarters. Graham (Tom Wilkinson) is a high court judge who after a successful career has retired with dignity and respect. Madge (Celia Imrie) and Norman (Ronald Pickup) are single, frisky and reluctant to part with their youth. Finally, Muriel (Maggie Smith), the oldest of them all, is a blatant racist who is scarce on funds. On her doctor’s suggestion, she agrees to go to India for her hip replacement because it’s cheaper there.

Dame Judi Dench plays the recently widowed Evelyn, through whose narration the plot reveals the personal stories of each of the lively characters.

Their situations lead the characters to consider retirement in India, in the supposedly glamorous Best Exotic Marigold Hotel, managed by the hopeful Sonny Kapoor (Dev Patel). Of course, the hotel is nothing like what was advertised, and turns out to be a dusty wreck. But the movie’s pace allows the visitors to adjust to their surroundings—well, most of them anyway. Jean refuses to adapt, whereas Muriel is forced to let go of her discriminatory outlook against Indians. Evelyn gets a job at a call center, and we learn that Graham has a past in India.

Cinematically, the movie accentuates the India we all know—with its traffic, crowds and chaos. But cinematographer Ben Davis weaves magic out of the colors, the jubilance, and love that extend through the hustle and bustle of India. There are also insights about India and the lives of its people: “The people of India consider their life to be a privilege, not a right,” explains Graham to Jean, who adamantly refuses to step outside the hotel.

I would have loved to see more of Muriel, who is superbly played by Maggie Smith and easily became my favorite character. Her racist nature is abrupt, but forgivable when you consider her age. Her evolution is subtle, and comes through in her kindness to the “untouchable” maid. Their interaction shows how much kindness can mean to someone who is not accustomed to it—for both Muriel and the maid. Sonny Kapoor’s character is played with exaggeration. Patel plays a young Indian who is trying to make something of himself against his mother’s wishes—a notion that may be still foreign to traditionalist India, which is displayed through his mother’s attempt to arrange his marriage and get him out of the sinking ship of a hotel. Their roles show the India everyone knows culturally. Although about retirees, The Best Exotic Marigold Hotel, directed by John Madden (Shakespeare in Love), is for everyone. It’s humorous, touching, and moving, all without attempting to change your life. All seven characters are cast brilliantly, and are owned by their thespian counterparts. Narrated by Judi Dench via Evelyn’s blog, the transitions of these characters, without being overly dramatic, tell the personal stories of each character, allowing the viewers to find themselves and their own story in these seven life stories.

As Sonny explains India’s charming philosophy to his hotel guests, “Everything will be all right in the end. If it is not all right, it is not yet the end.” Similarly, each story shows different phases in the same moment that has consumed these seven people. But it teaches them and the audience that no matter how old you are, change is not only possible but inevitable.

[Devika Rao is a freelance journalist in Atlanta with a B.A. in journalism and political science from Penn State University.]