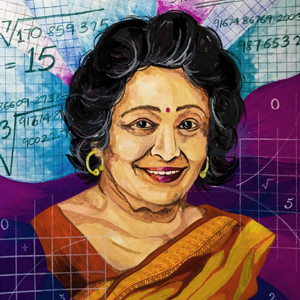 There’s math in humdrum, everyday tasks, from balancing a household budget to cooking and folding clothes. And then there are those life decisions, which require clear thinking and, yes, math. In this wistful remembrance and appreciation, RANJANI RAO writes about her mother, a mathematician who chose to be a homemaker.

A film about Shakuntala Devi (​left) inspired this tribute to the author’s mother, who was also a mathematician.

In the biopic Shakuntala Devi (on Amazon Prime), when the famed mathematician’s teenage daughter is visibly upset—“Why can’t you be a normal mother?” she says—Devi replies, “When I can be amazing, why should I be normal?”

Born in pre-Independence India, Shakuntala Devi earned worldwide acclaim as a “human computer” and secured a spot in the Guinness Book of World Records for her ability to perform complicated calculations at lightning speed. Her achievements were remarkable, not only for her innate gift, but also for the era in which she came of age.

As a teenager, I remember seeing Shakuntala Devi’s picture in the Bombay newspapers announcing her credentials as a math genius who was available for astrological consultations. The rectangular black and white photograph showed a bright-eyed, round-faced woman wearing a sari and a big smile. Her short hair was striking because it was uncommon in those days. My mother, who was a decade younger, also wore a sari and a big bindi but kept her long hair severely combed and braided, like most of her contemporaries.

Shakuntala Devi’s prodigious ability for computation and her courage in building an international reputation were spoken of in reverential tones in my family. Her story was of special interest because my maternal grandfather had been a mathematician, an astronomer, and an astrologer. As his only child, my mother had observed his brilliance as well as the hopes of people who traipsed through their home in Delhi—politicians and clerks, businessmen, and housewives—seeking a celestial remedy to their situation.

“Why didn’t you learn astrological predictions from him?” I asked Amma when I was in my twenties. I must have been on one of my visits home to Mumbai while I was pursuing a Ph.D. in America, naively assuming my life would always be golden. Although Amma was familiar with horoscopes, she stubbornly refused to make predictions.

“I saw many rich and powerful people visiting my father to seek assurance about their continued prosperity. They seemed to forget that their actions were more important than the whims of planets or words of an astrologer,” she replied.

A strange combination of cynicism and lack of ambition made Amma consciously step away from astrology despite her advanced degree in mathematics. But why did she choose to be a homemaker? I did not explicitly ask her that question.

To me, she was simply my mother. Amma was the constant reassuring presence in our home, the always available parent who got my brothers and me ready for school each morning and received us with a smile when we got home.

I remember returning from school one day and finding our apartment locked. At age 12, I was capable of following instructions to retrieve the spare key from our neighbor and let myself in. But when Amma got back home, I launched into a childish tantrum. I did not ask her if there had been an emergency or even consider whether I had the right to make such demands. I assumed that Amma’s first and only loyalty should be to the home, to me. Was I perpetuating blind assumptions of gender roles that I had passively imbibed? Or was I simply being a selfish child?

It would be many years before I would personally experience the disproportional burden of responsibility and expectations that falls upon women. While I had always sensed this immutable fact, I was shocked and hurt by the realization that for most women, the struggle to be seen as a complete person, the wish to be taken seriously, to be truly understood, begins within the home. The innocent words uttered by children can often be a mother’s undoing. 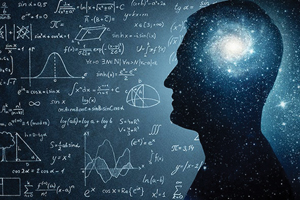 The mother-daughter scene from Shakuntala Devi’s biopic made me wonder if Amma had ever wanted to do something more with her life. Had I, as a demanding child, stifled her as a person?

My mother, by all accounts, had been a “normal” mother. Amma had given me her full attention, but I had noticed only one dimension of her personality. Until I became a mother. When maternity leave ended, I returned to work. Through the haze of guilt at leaving my child with a babysitter, I began to see Amma as an individual with her own dreams and desires, preferences and priorities, wishes and regrets.

I had always admired Amma’s incredible sense of fairness in splitting a treat or in assigning chores equally to her three children. Now I began to notice her training in mathematics in everyday actions. From creating beautiful rangolis with symmetrically spaced dots, to organizing the limited kitchen space for maximum efficiency, from elaborating concepts of geometry while folding clothes, to explaining recipes using the principles of ratio and proportions, from managing the frugal household budget to giving precise directions, Amma’s aptitude for mathematics was embedded into her daily life.

Amma was the person who helped with math homework and solved Sudoku grids. Amma read editorials and solved the word jumble in the daily newspaper. Amma enjoyed reading John Grisham and quoted from the Bhagavad Gita. My content-to-be-a-housewife mother was also the brave woman who took a flight to California by herself to be with me at the time of my daughter’s birth.

When I was four, Amma had insisted on enrolling me in a more expensive school compared to my two brothers. When I was 40 and struggling in a long, unhappy marriage, she didn’t feed me platitudes about Indian culture or a bad astrological phase. Amma simply pointed out the obvious. Through my education
and my work experience, I had already proved that I could manage my life. I had the option to choose the path that was best for me, even if it wasn’t the conventionally endorsed one.

Amma had lacked ambition to work outside the home, but she had lived by her belief that everyday actions have greater impact than the capricious movements of orbiting planets. Unlike her, I had chosen to find validation outside home and had suffered many crises of confidence. Each time I faced an impasse, Amma had guided me. Not with mere words, but by embodying her philosophy that wisdom lies in the confluence of thoughts and actions.

A dozen years after Amma’s death, I am humbled by the discovery that my mother was not normal. She was amazing.

Ranjani Rao, scientist, writer, wife, and mother, originally from Bombay, now lives, reads, and works in Singapore. She is co-founder of Story Artisan Press. Connect with her at www.ranjanirao.com.