COVID-19  In-depth info for Indians in Atlanta/Georgia. Click here
Home > Magazine > Features > Musings: What Are You?

Musings: What Are You? 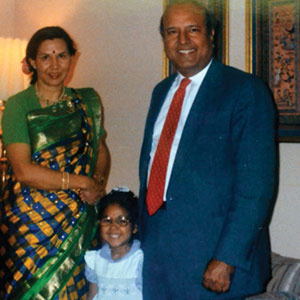 Photo: A young Nishta Mehra with her parents.

Growing up in Memphis, Tennessee, NISHTA MEHRA, a child of Indian immigrants, found herself in a milieu that was largely black-and-white. But color—not to mention race—is more complicated, as Mehra soon realized, and being a child of America, she also knew that the world is far from two-dimensional.

It was a question I had never been asked before, let alone in a drive-through line by a complete stranger holding out the change for mine and my mother’s order. Backyard Burger is Memphis’ homegrown hamburger franchise, and they make a pretty decent drive-through burger for the money. One taste of their thick-cut waffle fries takes me right back to the feeling of a new driver’s license and Saturday afternoons. My mom, the vegetarian, loves them for the flavorful vegetarian patties which they cook, considerately, on a separate grill.

At first I thought the drive-through attendant had asked “Do you want ketchup with that?” because her tone was so glib, as if she questioned each customer about the origins of their skin color, as if it were company policy, like saying “Have a nice day!” even when you don’t really mean it. I didn’t even understand the question at first, let alone comprehend that I might be legitimately offended by it. Instead, I looked up at my questioner’s full, dark-skinned face, said “What?” and listened as she repeated her question.

“Oh...um, no. I’m Indian,” I answered finally, too well-trained to blow her off—one does not match rudeness with rudeness—but utterly unable to compose an appropriate response. What is the appropriate response in a situation like that, anyway? To turn snobby or cold would solidify the very social color strata that likely led to this awkward question-and-answer session in the first place.

I continued out of habit, to clarify that I didn’t mean the kind of Indian that kids stereotypically pantomime for backyard play: “I mean, my family’s from India. My parents are.” I saw her glance at my mother, who has been mistaken for or assumed to be all of the following ethnicities at least once: Greek, Russian, Italian, Korean, Native American, Chinese, Mexican, Caucasian. I, on the other hand, have my father’s unmistakably dark brown skin, made browner by my penchant for sunshine. My skin is as dark as or darker than several African-American friends of mine. I understood what this woman was seeing: in the world of Memphis, where there is only black or white, I looked like the daughter of a white mother and a black father.

When I counteracted that assumption, though, and proved myself to be something else, outside the categories of Memphis black or white, the woman’s demeanor changed. Her body language, which had been imposing and superior, softened, and her tone became deferential.

When I was growing up, Memphis was two distinct worlds, a shockingly segregated relic, a step back in time. By now, the city has found its way to Farmers Markets, school reform, inventive cuisine, even a Whole Foods, but most neighborhoods, schools, churches, parks, and barbecue joints still remain split, black or white. Political votes are, with rare and very recent exception, made on the basis of race. A friend of mine recently put it this way: “We may work together, but we don’t have each other over for dinner.” The city is just beginning to have conversations about its separateness—very hard, very tricky conversations that are made even more difficult by the Southern penchant for dodging the speaking of unpleasant things.

When I return for weddings, holidays, and the like, I rediscover a curious phenomenon; I will, at some point in my visit to Memphis, be the only non-white person in the room. Or rather, the only non-white guest, as dark faces at country clubs and restaurants tend to be employees.

This is a feat that would be impossible to imagine in Houston, where I live now, but it’s entirely possible to spend your whole Memphis life inside one circle of color or the other. For me to do that, I’d have to go all the way to India, yet in my hometown it isn’t unusual, isn’t even noticed. White people hang out with white people, black people with black people. The self-segregation takes itself right down to the debutante balls—which still exist, by the way, as the means by which one is “officially introduced to society,” while wearing a virginal white dress, of course. There’s a ball for the black girls and a ball for the white girls. So, then, where does the brown girl go?

Because I grew up outside the city proper, I learned, as a teenager, to travel within the city limits to shop for makeup. In lily-white suburbia, the darkest shade my Target carried was “tan”—not so helpful to me. As a kid, I attended many an elementary school birthday party at country club pools, the only non-Caucasian classmate invited and the only non-white guest in sight. I could see the African-American women folding towels and cleaning chairs eyeing me as if to say, “Child, what are you doing here?” As someone who chose teaching English as a profession, my first exposure to irony was at those very parties, watching dozens of white men and women lying on their towels in the sun, soaking in the full power of their privilege while trying their damndest to make their skin as dark as mine.

Please note: the same companies that sell self-tanning lotions and bronzers here in America sell “whitening” or “lightening” creams and face-washes in India. My fair-skinned mother was teased mercilessly while growing up in India, out of jealousy over her complexion. The older girls at her parochial school called her “Macbeth,” strange insult conjured with the weirdest Western name they knew.

To this day, if my mother sent a photograph of me to certain relatives in India, comments would be made about how dark I’ve gotten, tsk tsk, my mother shouldn’t let me run around so much outside in the sun, how will she ever find someone for me to marry? But that’s a whole other kettle of fish.

Nishta J. Mehra is a writer and teacher. A proud, first-generation daughter of Punjabi immigrants, she now lives in Houston, Texas, and blogs at www.bluejeangourmet.com.