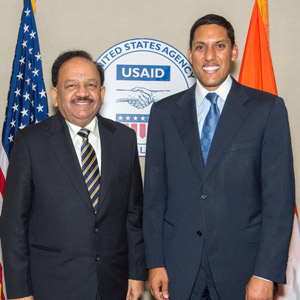 India’s Health Minister Weighs in On…overhauling India’s creaky healthcare infrastructure, and about his comments on the use of condoms—comments he believes have been misconstrued, causing a controversy. Dr. Harsh Vardhan elaborates on this and more in an exclusive interview during his Atlanta stop on his official U.S. visit.

Earlier this year in March, the World Health Organization issued certification confirming the eradication of polio from India. The one man who is largely credited with this momentous milestone is Dr. Harsh Vardhan, who, as Delhi’s Health Minister, organized a massive immunization drive under the banner of his Pulse Polio movement.

And yet, as India’s newly minted Health Minister in the Narendra Modi government, Dr. Vardhan can hardly rest on his laurels. He inherits a bulging portfolio of problems in desperate need of solutions—a dilapidated government health infrastructure (particularly in rural areas), corruption in medical councils, shortage of medical schools, and poorly executed and monitored national health missions, to name just a few. Sanitation, environmental concerns, and clean water supply, though they fall outside his ministry’s jurisdiction, inevitably impact public health; government neglect of these issues over decades leads to outbreaks of dreaded diseases like kala azhar, encephalitis, and filaria. Maternal and infant mortality rates are a sad contradiction to the global image of India as a rising economic superpower.

But Dr. Harsh Vardhan is nothing if not upbeat about his vision for a healthier India. With several years of experience under his belt as a UN doctor, the minister has traveled the world and advised various governments on health policies.

The Minister was in the U.S. attending a conference on child and maternal deaths organized by the USA, together with Ethiopia and India. In Atlanta, he had an official visit with the CDC (Centers for Disease Control and Prevention) based on his desire to initiate a similar national level organization for epidemics in India. We caught up with him during his address to the Indian community at Palace Restaurant and Banquet Hall. Following are excerpts from the interview. 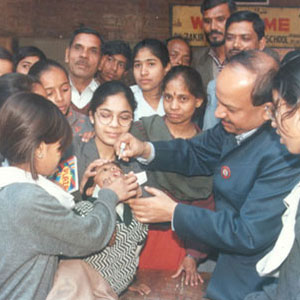 On his priorities as the Health Minister
In health, every issue is important. If you are suffering from tuberculosis, that is the most important issue to you. For a family with a polio afflicted child, polio eradication may be the most important thing in life. We are trying to work on all issues simultaneously and planning our priorities.

Prevention of maternal and child deaths is among our very important priorities. We are also looking at eradication of diseases like measles, kala azar and filaria. Our government’s focus is more on strengthening the preventive and positive aspects of health that unfortunately are ignored or not given due attention. Additionally, we will focus on indigenous medicine systems because they have the capability to deliver medicines that are affordable and significantly effective.

On making healthcare facilities more accessible
We are working on providing universal health insurance to every citizen. We have already appointed a working group of experts and are studying various models within the country and outside to see how in a vast country like India, with 125 crore (1.25 billion) people, health insurance, and health assurance can be given to everybody.

We are also in the process of establishing All India Institute of Medical Sciences (AIIMS)-style institutes in almost every state so that people everywhere have access to world-class tertiary healthcare services. We also plan to build several more cancer institutes as the disease is emerging as a big menace to the world and in particular, to Indians.

In these institutes we plan to develop departments of public health that will collaborate with universities like Harvard and Johns Hopkins School of Public Health. I have already had discussions with some of these organizations. Our institutes will also focus on occupational and environmental hazards, subjects that have been ignored over the years.

This is over and above the routine issues that need strengthening: primary, secondary and tertiary healthcare, improving service quality, motivating health delivery personnel, improving the monitoring, strengthening of tuberculosis and malaria control programs….

On ensuring basic medicines for all
An important component of our drug policy is to ensure that at least 50 essential drugs are made available free of cost to every Indian.

On changing the Indian mindset
We are working towards ensuring that every Indian adopts a healthy lifestyle. According to the World Health Organization, 40 to 50 percent of the world’s disease burden is because of physical inactivity. If I can make every Indian walk for half an hour every day, perform some yoga and exercises, and if I can make every child go to a park and play sports for half hour or one hour, I feel I have done my job as Health Minister. We have to work on ensuring that people follow a balanced diet, eat nutritious food, and avoid alcohol and tobacco.

On redefining health
The WHO says health is a state of physical, mental, social, and spiritual wellbeing of the individual. Absence of disease is not health; it is more of a positive feeling, a feeling of wellness. We want to convert health into a big social movement. Going to a hospital and getting treatment, that is not health. If someone visits a doctor, pays consultation fees, and takes medicines, he feels he is spending on health. But actually he is not spending on health, he is spending on disease! To change these concepts, our approach, policy, and strategies, everything has to change.

On global health collaborations
I have had a meeting with the Health Secretary of USA. I have also met with Dr. Raj Shah – the chief of USAID, the UN special envoy and representatives from the Bill and Melinda Gates Foundation.. During my visit, I have had a chance to interact with two dozen health ministers of various developing count-ries at this conference, ‘Acting on the Call: Ending Preventable Child and Maternal Deaths,’ where India, Ethiopia, and America have provided leadership. We have all pledged to meet millennial development goals, to reach those goals by the end of 2015.

On health and information technologies
Telemedicine is one of our priority areas on which we are already working; we would like to take it to its peak.

We are also planning a national health portal. My vision is that in the next 3-5 years, 125 crore Indians will connect regularly to a portal that will be extremely popular, for good quality information, and use that guidance to better their lives. I am planning to have a committee of experts at the national and global level so that we have the best information available about the best things happening all over the world.

On changing India’s historical wariness towards global research co-operation
I believe that this whole world is a family. Ultimately, whatever research is taking place in India or America, the results must be put to the good use of human beings worldwide. That should be the approach, that’s how we would like to think and collaborate with the best people. We are absolutely going to be open minded and not allow any sort of politics to enter into the field of health because health, we feel, is … a social service, it’s not about politics, it’s not about roots.

On media distortion of his recent comments on AIDS prevention
You see, what I have said is—and I still stick to that—for the prevention of AIDS, it is important that you should impart 100 percent knowledge to everybody. One mechanism to avoid AIDS is to protect yourself by using condoms. What I have said is that using a condom is good, it helps in safe sex and population control also. I am not a fool to say stop the use of condoms … but I am saying simultaneously that our culture has a great tradition. There should be some sort of strengthening of this component too, where-by we advocate that people should also understand the importance of moral values and integrity of sexual relationships.

Somebody has to talk about it. But then, you know how the media behaves. I think it is an irresponsible way of projecting things. People have to be told everything in the right perspective; media also should behave in a responsible manner. In the name of liberal journalism, or liberal attitudes, you cannot allow the values of a country to be compromised. How can you allow that?

These days a lot happens outside the area of integrity in sexual relations. When young people engage in illicit sex, what happens when the message that goes out only focuses on condoms as a preventive measure against AIDS? That they can keep indulging themselves and will get away with it as long as they use condoms? At the root of what I said was my feeling that condoms can give you safe sex but fidelity will give you the safest sex.