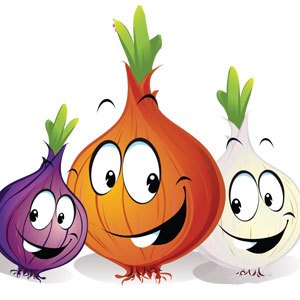 ... and not just by their chemical qualities.

India has always been a strange place. What with slums alongside mansions, sadhus alongside techies, and buffaloes alongside BMWs, it is a country that baffles sane people. However, the kind of insanity that is currently prevalent in this country boggles the minds of even dyed-in-the- wool Indians.

Only one story comes remotely close to capturing the essence of present-day India: that of Andher Nagri, Chaupat Raja. As the legend goes, this was the land of a foolish King where nothing made much sense. It was a place where vegetables cost the same as richly decadent sweets. And so the couplet:
“Andher Nagri, Chaupat Raja,
Taka ser bhaji, taka ser khaja.”

The original story of such a crackpot kingdom may sound outrageous, but this is what is happening in India these days. The skyrocketing prices of vegetables is causing quite a stir. I have heard of a story doing the rounds, of an engagement being canceled because of the astronomical cost of vegetables. And of a wedding being called off because the groom’s family wanted lemon rice with tomato, coriander, and tur daal rasam to be served for the wedding lunch. The bride immediately called the police, who slapped harassment charges on the groom’s family. The bride’s father reportedly had offered the groom a house in Koramangala, Bangalore, and a Mercedes-Benz, but the groom was insistent on the menu.

“What do these bridegrooms think? Are we made of money?” he is said to have asked reporters tearfully.

Yes, this sounds nuts, but is it plausible? The answer is a resounding “Yes!”

In the old days, i.e. circa 2007, restaurants would dump a lot of onions and tomatoes in their dishes to cover up for the lack of more expensive vegetables. The smaller onions or “sambhar onions” as they are called were the cheapest. Lime or tomato rice was what you made if you wanted simple fare. And if you wanted to feed an unwelcome guest, you made a veggie fry with beans—it was at the bottom of the veggie totem pole. In comparison, soft drinks and chocolate seemed like luxuries for the rich.

And now? The other day, I went to the store to buy some staple vegetables. Turns out that a 2-liter bottle of Sprite (Rs. 15, on sale) is far cheaper than a kilo of onions (Rs. 80); and a bar of chocolate costs the same as a kilo of tomatoes (Rs. 40). How’s that for Andher Nagri?

When we moved back to India, a little over four years ago, visiting the vegetable wallah was a pleasure. We had a man who brought fresh veggies to our doorstep, and it quickly became my favorite pastime. My husband even grew a little suspicious and jealous of my involvement with the vegetable guy.

“Mmmm, so fresh,” I once murmured.

“The vegetable seller?” he asked, his brows lowered ominously.

“No, the vegetables,” I said, and proceeded to let him know the true object of my passion. “The tomatoes are so red and juicy, the cukes are fresh from the field, and as for the tender eggplant, it doesn’t even know that it has been picked yet.”

Thereafter, my husband left me to my passion, as I couldn’t do much harm with it. I could buy a kilo each of the seven different veggies the vendor carried in his basket, but still spend under 80 or 90 rupees.

But then things began to change. The first ominous note sounded two years ago, when I asked for some garlic. When I held up two small bulbs, the man said, “15 rupees.” A kilo cost Rs. 290, he said. I was stunned. A week ago, he had thrown in a bulb for free. The next week it was the tomatoes whose price had vaulted. Then beans chose to follow the same route. Limes became dearer, and then the humble coriander. Onions are now floating in the stratosphere of vegetable marts—they cost anywhere between Rs. 60 to 80, sometimes even Rs. 100.

We are seeing crazy things happen on the produce scene. A couple of months ago, at the end of the mango season, I bought a kilo of mangoes for the same price as a kilo of tomatoes. Taka ser bhaaji, taka ser khaja? Incredibly, the very next day, the price of tomatoes jumped, while mangoes stayed the same!

These enormous changes to staple foods, the very fundamentals of life in the country, are changing behavior patterns also. Earlier, a year ago, every small grocery store would stock onions, potatoes, green chillies, and tomatoes as a matter of course, for those were the items that would constantly move out. But when the tomato prices shot up, grocery stores in poorer neighborhoods quit stocking the vegetable, because no one was buying them. As for vegetable vendors, one would think that they are making their fortunes, but that is not true. The vendors set aside a sum every day to purchase their goods at wholesale markets. They buy within that amount and sell it at your doorstep for a small profit. But soaring prices have put certain vegetables out of their reach as well. My vendor sometimes tells me that a vegetable that I asked for is priced just too high for him to buy at the wholesale market. And then there are other tactics of retailing that come into play, especially in the greens sector.

So who is making the money? Definitely not the farmer. The wildly fluctuating prices are absolutely ruining farmers, who have been known to unload their trucks of tomatoes on the streets when they are unable to sell them for a fair price.

For the consumer, their budgets are getting a whole lot bigger. Eating out at small unsavory roadside eateries which don’t charge much is becoming a more viable option than cooking at home. Dogs are losing out as doggie bags become a necessity for people.

And unhealthy eating and snacking is looking a lot more economical, at least on the surface—a bottle of soda or a loaf of bread costs less than half a kg of onions. Pulses and lentils, too, are fast getting out of the price range of the middle class. The other sad aspect of this whole fiasco is the picture of the producer. Farmers, at least in South India, are facing huge labor shortages. More and more farmers are letting their fields that used to grow paddy, pulses, and vegetables lie fallow, unable to find labor. Couple this situation to that of some other farmers who are getting their rich agricultural land denotified and parceling them and selling them as plots to city dwellers who hanker for their own piece of land.

Faced with heartache every time I go veggie shopping, I’ve begun to look for ways to exploit this situation. As a result of those cogitations, I confronted my husband one evening.

“I think we should convert our coffee estate into something else,” I said. “We should uproot the coffee and plant beans.”

“I don’t think it is a good idea to plant vanilla when the market for vanilla beans is so bad,” he began.

“I’m talking green beans, not vanilla,” I interrupted. “With an intercropping of coriander and tomato, we will be in the Fortune 500 billionaire list before we know it.”

He gave me an incredulous look, and quickly changed the subject, and we haven’t discussed the topic since. But I haven’t abandoned hope yet. A few days ago, I took him with me to the vegetable market, and saw the stunned look in his eyes. I think he’s considering my idea now. Maybe a dinner of chocolate and Sprite will seal it. As to his favorite uttapam with tomatoes and onions…hey, we are not on that billionaire list yet!

Humorist and freelance writer Lakshmi Palecanda, once an expatriate in the U.S., moved back to Mysore, India and is still struggling to adjust.