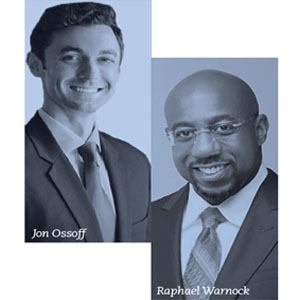 From McCarthyism to Birchers, history teaches us the grave dangers of rogue politics—the kind that have manifested in our times as Trumpism.

Georgians now have a historic opportunity—in the upcoming Senate runoff elections on January 5—to reject the Trumpism of David Purdue and Kelly Loeffler in favor of the unity and hope offered by Jon Ossoff and Reverend Raphael Warnock.

I grew up in a bellwether county—a place where farmers, ranchers, and shopkeepers voted every four years for the same Presidential candidate chosen by the nation as a whole. But you wouldn’t have known that at our divided dinner table. My mother, a bookkeeper who worked for the Jewish owner of the oldest general store in the county, was fiercely Republican. My father, a veteran, a salesman, and a laborer was a working class Democrat.

Yet they agreed politically on one thing. They despised the “Birchers.”

The John Birch Society was a conservative group that built upon the vicious spirit of 1950s’ McCarthyism.
“Birchers”—members of this Society—wrapped themselves in the American flag, vilified civil rights and the United Nations, and labeled liberals as secret communist traitors. They paved the way for modern Trumpism.

In my hometown, the Birchers were virulent. They posted a billboard on the highway proclaiming that Martin Luther King Jr. was a communist. About the time I was eight years old, the Birchers began attacking John Goldmark, a state legislator from Washington, for being a “Communist” and a “pinko.” The ultraconservative weekly newspaper of my hometown wrote that Goldmark was “a tool of a monstrous conspiracy to remake America into a totalitarian state which would throttle freedom and crush individual initiative.” One Bircher later jacked up the catcalls by labeling Goldmark’s wife, Sally, a “lesbian communist,” demonstrating what Sally Goldmark would call the Society’s “meanness of spirit.”

More than 20 years later, a young man broke into the home of John Goldmark’s son Charles. He beat to death Charles, his wife, and their two children, aged 10 and 12. The man said he murdered the family because he heard at a meeting of a far-right group that the Goldmark family was communist.

Fear has life and death consequences.

I view Trumpism through that lens of my past. As John Heer wrote in “The New Republic,” the Birchers’ conspiracy theories, racism, and paranoia have found their new home under “Make America Great Again” hats. As John Savage wrote in Politico, the Birchers’ once-fringe ideas have become commonplace in the Republican Party.

When U.S. Senator Kelly Loeffler recently claimed in an advertisement that her opponent Raphael Warnock will “give the radicals total control,” I heard echoes of Sen. Joseph McCarthy accusing Annie Lee Ross, a black communications clerk, of being a communist. Asked by the Senate committee if she’d heard of Karl Marx, Ross answered, “Who’s that?” The footage of McCarthy’s committee questioning Ross shows McCarthy’s empty
chair. He had left the room rather than face the kind and confused woman he had falsely accused.

When U.S. Senator David Perdue ran an advertisement against his opponent Jon Ossoff in which Ossoff’s nose has been enlarged, I see the barely disguised antisemitism I first observed as a child. Fear of Jews led to centuries of ghettos, pograms, and denial of the rights of citizenship, such as the opportunity to hold public office. Perdue, in medieval fashion, continues to incite hatred embedded in age-old prejudices.

We do not need subversives in the Senate. We need people who will work to unite America, not divide it.This makes the upcoming Senate runoff race simple for me. I choose hope, not fear. I choose unity, not division. I choose truth, not lies.

Outside Georgia, this is about control of the U.S. Senate. Millions will pour into the state to try to convince us to swing the nation right or left. But the election is our choice. And we cannot surrender our ideals to some national pressures— what Perdue and Loeffler did when they called for the resignation of the Georgia Secretary of State when the vote didn’t go the President’s way. We might think our elected officials respect the voters, but no, they were willing to surrender even their party loyalty under pressure from Trump.

Who gives me hope: the billionaire or the preacher? The richest U.S. senator, Loeffler, owns the WNBA Atlanta Dream, the pro basketball team of Atlanta. But even the Atlanta Dream athletes who played for her worked against her election. Loeffler could buy the “Dream,” an image based in Martin Luther King Jr.’s famous speech about equal rights, but her opponent Raphael Warnock preaches from the same pulpit at Ebenezer Baptist Church where King once spoke. There lies hope.

Who serves truth: the businessman or the journalist? Perdue tried to disparage Ossoff with fictitious claims that the Democrat was endorsed by the Communist Party. This echoes the most vile Bircher accusations. Perdue stands with Trump, a man who has told more than 20,000 lies in less than four years. Words and promises are simply political tools to them. Yet as an investigative journalist, Ossoff was bound by ethics and law to verify facts and publish only what could be proven true, lest he be required to defend it not on Twitter but in a court of law. Therein lies the truth.

And where will we find unity? The incumbent “outsiders” Perdue and Loeffler have presided over the most divisive years of politics since the Vietnam era. They presided during the deaths by Covid-19 of nearly 250,000 Americans and 9,000 Georgians. They supported Trump’s refusal to accept the voters’ choice in the 2020 presidential election. Unity, it seems, cannot be found there.

I find unity in Ossoff and Warnock, who have campaigned not against imagined evils but for the things America needs: good health care for all, Social Security, clean energy, lower taxes, living wage jobs, and fair treatment of everyone no matter what their race or creed or heritage.

My friend immigrated to the U.S. from India more than a decade ago. After earning his citizenship, he started a foundation that he and I work together on, connecting people internationally. He is also the best photographer I have ever known. He had a belief when he arrived in this nation: that his talent would be welcome, and his hard work would help him achieve what we often call the “American Dream.” In recent years, it has been a much more difficult road than he imagined.

Dr. Thomas Grant is an associate professor of journalism at the Abraham Baldwin Agricultural College in Tifton, Georgia. Prior to academia, Grant was a print and broadcast journalist for 30 years. He has won more than 10 national awards for his reporting, including two duPont-Columbia Awards, often referred to as the Pulitzers of broadcast journalism.