Opinion: India’s beautiful and secular legacy is worth fighting for 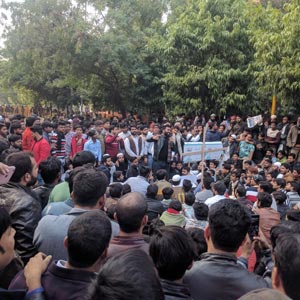 Massive protests throughout the country against the Citizenship Amendment Act is a sign that the nation’s conscience has been stirred against the increasingly polarizing actions of the ruling party.

Spontaneous, nonviolent, and peaceful protests erupted against The Citizenship (Amendment) Act, 2019 (CAA) immediately after its passage into law on December 11, 2019. The anti-CAA movement—largely led by women and students—has since continued nonstop, gained in peaceful solidarity, grown, and swept across the length and breadth of India.

It is important to understand all sides of the argument without allowing the polarizing and political high-voltage rhetoric to drown out logic. If the honest intent of CAA is humanitarian and to protect people who have fled religious persecution, then the correct approach will be to treat all persecuted people seeking refuge as equals (regardless of their religion) and then use a fair vetting process (like for any naturalization). Allowing six religions and three countries to gain citizenship with minimal proof, while specifically excluding Muslims from this process, appears political and is what makes the intention behind CAA open to cynicism.

The CAA amends the Citizenship Act of 1955 to grant a swifter path to Indian citizenship under the assumption of religious persecution to any individual belonging to the specific minorities of Hindus, Sikhs, Buddhists, Christians, Jains, and Parsees from Afghanistan, Bangladesh, and Pakistan, who arrived in India before December 31, 2014.

The government of India has argued that the intention behind the CAA is two-fold: (a) a humanitarian gesture to protect persecuted minorities from the three countries; and (b) to prevent illegal immigration from these countries.

If the honest intent of CAA is humanitarian and to protect people who have fled religious persecution, then the correct approach will be to treat all persecuted people seeking refuge as equals (regardless of their religion) and then use a fair vetting process (like for any naturalization). Allowing six religions and three countries to gain citizenship with minimal proof, while specifically excluding Muslims from this process, appears political and is what makes the intention behind CAA open to cynicism. Moreover, it threatens the wonderful legacy of secular India.

The founding of the modern Republic of India was a moment of great hope for the entire world as a beacon of freedom and as a model of inclusivity, peace, and a forward-looking march of human progress. It was a moment that placed freedom, equality, fraternity, and justice as universal principles, regardless of age, gender, caste, religion, and any other attribute. It is this that the world has admired about India, and what has given the country enormous “soft power.” Violating these principles can not only cause major internal strife within India, but can cost the country a lot of her friends internationally.

Examining the recent demography of India, about 5.5 million people in India reported their last residence outside the country (Census 2011), which is roughly 0.4% of the population of India (1.339 billion). Of these, 2.2 million reportedly came from Bangladesh, 0.7 million from Pakistan, and only 6,596 from Afghanistan. The vast majority of migrants (>90%) arrived soon after 1971—after the war creating Bangladesh—and so have lived in India now for nearly 50 years or two generations. Privileging some of these people for rapid process to citizenship, while denying others this legal path on the basis of their religion, runs against the norms of India’s pluralistic and secular principle.

Additionally, the idea of a potentially massive nationwide exercise to identify “illegals” through, for example, a National Register of Citizens (NRC) or a National Population Register (NPR) is a logistical and costly nightmare. The numbers of “illegal” immigrants are tiny: 0.2-0.3% (estimated from Census 2011). In a population as large as 1.4 billion, finding them will be like searching for the proverbial needle in a haystack. Importantly, it will also put innocent Indian citizens at risk to have to prove their belonging (as has been the experience with the NRC in Assam). Invariably, Indian Muslims and poor people without birth records or other documentation will be vulnerable to harassment and disenfranchisement.

It is this existential fear that has aroused protests across India, by not only those directly threatened (the country’s religious minority and poor citizens), but also by advocates of civil rights, equality, and justice. What is important is that these protests have been spontaneous, apolitical, and decentralized in their organization and leadership, and have maintained the high ideals of the Gandhian nonviolent social movement—a great gift which India gave to the modern world.

For the government’s part, it has tried to explain that the CAA per se is not about India’s 200 million Muslim citizens. This may technically be correct. However, a number of factors create distrust between the government and the country’s minority Muslims, poorer classes, and liberal secularists. The past several years have witnessed a growing and toxic atmosphere characterized by Hindutva muscle power and a blatant Islamophobia agenda. When viewed against this backdrop, the CAA, by specifically excluding Muslims, is understandably seen as a political ploy, besides its clear violation of the secular constitution of the land. An added fear is the precedent it would set, and worse still, should it ever get linked to the NRC or NPR. True, the government says that the CAA and the NRC/NPR are separate instruments, but these two moves must be seen collectively for what they are. In fact, the Home Minister linked the CAA, NRC, NPR on various occasions, including in the Parliament, and even spoke of the chronology in which they would be carried out – generating the flashpoint for the spontaneous protests.

Alarmingly, the space for democratic dissent appears to be shrinking amongst government and public vitriol, and actions against the protestors. The government has not directly and peacefully engaged with the concerns of the protestors or provided opportunities for dialogue or found ways to understand their apprehensions. Even more worrisome is the fact that in many states controlled by the BJP (notably, India’s most populous state, Uttar Pradesh), there have been belligerent and oppressive approaches to stop the peaceful protests, sometimes involving gross police aggression, arrests without warrant, and intimidation. Police have entered some university campuses to aggressively stop protestors, and have passively watched militant gunmen shoot at protestors in some places.

Peaceful protestors, such as famous historian Ramachandra Guha and Supreme Court lawyer Prashant Bhushan, were taken into temporary custody. A German student and a Norwegian visitor were asked to leave the country because they joined a peaceful protest. In Karnataka, a school teacher and a parent were arrested and charged for sedition for staging a play about the CAA, and the police have interrogated children about this. These actions clearly violate civil and human rights and suppress dissent in the world’s largest democracy.

Several state governments (e.g., Kerala, Bengal, Madhya Pradesh, Maharashtra, Rajasthan, Chhattisgarh, Punjab, others), under non-BJP rule, and representing nearly 60% of the country’s population, have issued resolutions opposing the CAA. Many notable academics, writers, Bollywood stars, civil society groups, international groups, human rights’ organizations have spoken against the CAA. Several thoughtful members of the Indian diaspora in the U.S., including Satya Nadella, Chief Executive Officer of Microsoft, and Abhijit Banerjee, winner of the 2019 Nobel Prize for economics, have been outspoken against the CAA. Prominent media channels in the U.S., Europe, Australia, and others have raised serious concerns about the CAA. The United Nations has called the CAA discriminatory. Several friendly foreign governments, such as the European Union, are discussing resolutions against the CAA. The CAA now clearly adds to the growing perception that India is turning into a majoritarian Hindu state, and one in which the most sizeable minority feels threatened, and where freedoms and rights are being increasingly trampled upon. India’s ranking in the Global Democracy Index has plummeted in the past few years.

The notion that India can afford to violate the rights of her 200 million strong Muslim citizens, allow injustices to occur to them, ignore their well-being as equal citizens, segregate them, and yet hope to build a proud, great, new, and united Hindu India is naïve. Moreover, this communal orientation is fraught with danger to all Indians and to the world. Smaller nations, such as Yugoslavia, attempting coercive unification and homogenization across ethnicities, failed and broke into civil war and split into several parts.

What has been remarkable about India is that it has very ably held together its vast and diverse multireligious, multilingual, and multicultural population with the civil threads of democracy and freedoms. As the protestors and their growing supporters understand, India’s beautiful and secular legacy is worth fighting for.

The notion that India can afford to violate the rights of her 200 million strong Muslim citizens, allow injustices to occur to them, ignore their well-being as equal citizens, segregate them, and yet hope to build a proud, great, new, and united Hindu India is naïve. Moreover, this communal orientation is fraught with danger to all Indians and to the world.

K. M. Venkat Narayan, M.D., a professor of Global Health and Medicine at Emory University, Atlanta, and director of the Emory Global Diabetes Research Center, is regarded as a national and international leader in diabetes and chronic diseases. He also writes on current events and issues.