COVID-19  In-depth info for Indians in Atlanta/Georgia. Click here
Home > Magazine > Features > Opinion: Now Modi government has proved that it not only talks like Pakistan, it thinks and acts like it

Opinion: Now Modi government has proved that it not only talks like Pakistan, it thinks and acts like it 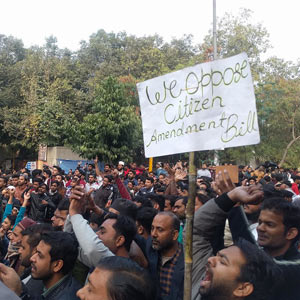 The Citizenship (Amendment) Bill is not just an affront to basic tenets of equality enshrined in our Constitution, but an all-out assault on the very idea of India.

In a flourish of the brute majority the Bharatiya Janata Party enjoys in the Lok Sabha, after a marathon seven-hour debate that went past midnight, the Citizenship (Amendment) Bill or CAB was passed in Lok Sabha Monday with 311 voting in favor, and the opposition, despite a spirited and reasoned critique, putting together just 80 ‘noes.’ The Rajya Sabha followed suit Wednesday, with a tighter scoreline—125 to 105. In passing this communally tinged legislation, the Narendra Modi government has successfully managed to set India on a dark path from which we may struggle to return.

The Bill that was debated, considered, and passed, is by design, fundamentally antithetical to everything our country has historically stood for. By essentially declaring that one community is valued less in the eyes of their government, the amendment is not just an affront to the basic tenets of equality and religious nondiscrimination that have been enshrined in our Constitution, but an all-out assault on the very idea of India that our ancestors gave their lives for during the nationalist struggle. We have now, in the words of Pratap Bhanu Mehta, taken a “giant step to officially convert a constitutional democracy into an unconstitutional ethnocracy.”

Chaos in name of nationalism
In parts of India, particularly in the northeast states, the repercussions of this conversion are already being felt, with mass protests, state-wide bandhs declared, and internet and telephone services suspended in certain areas. Just Tuesday evening I received an email from a worried Bengali Hindu third-generation student in Assam who pointed out that they are living in fear of reprisals against them by the local Assamese people who are worried that this bill will create an additional burden on them.

The fact is that the implications are not limited to the clauses of the bill in itself, for in introducing such a piece of legislation, especially in conjunction with a new “national NRC,” the BJP will unleash an atmosphere of fear and a climate of bigotry that will sweep across the country, claiming Indian citizens as victims, generating chaos in the name of nationalism.

The last laugh
Through this exercise, the BJP has allowed two individuals to have the last laugh. The first, of course, is their own ideological forefather, V. D. Savarkar, who first spoke of dividing our country into a Muslim India and a non-Muslim India. In 1940, this idea was reflected in the Pakistan Resolution adopted at the Lahore session of the Muslim League. At the twilight of our nationalist struggle, our own freedom movement split on the issue of whether religion should be the determinant of nationhood. Those who believed in that principle were those who advocated the idea of Pakistan. However, Mahatma Gandhi, Jawaharlal Nehru, Maulana Azad, B. R. Ambedkar believed the opposite—that religion had nothing to do with nationhood. Their idea of India was a free country for all people of all religions, regions, castes, and languages, in utter repudiation of the two-nation theory. Our Constitution reflects this basic idea of India that the Modi government now seeks to betray.

As I said in my parliamentary debate, the passage of CAB will mark the definitive victory of Jinnah’s thinking over Mahatma Gandhi’s. The BJP cannot both reject Pakistan and advocate the same logic as Pakistan. How ironic that it should be that Hindutva BJP now seeks to ensure the final vindication of Mohammed Ali Jinnah. And how ironic that Prime Minister Modi should accuse his Congress critics of talking Pakistan’s language, when it is his government that not just talks like Pakistan, but acts like Pakistan, and worst of all, thinks like Pakistan.

How ironic, too, that the Hindutva party has aggressively pushed for a legislation that betrays millennia of Hindu civilizational practice and abandons a historic legacy that Hindus were proud to lay claim to. Swami Vivekananda had famously said in his 1893 Chicago speech that he was proud to speak for a land that had always offered refuge to the persecuted from all nations and faiths. We lived up to that legacy when we gave shelter to Tibetan refugees, the Bahai community, Sri Lankan Tamils, and Bangladeshis without ever asking about their religion. Now, this government wants to single out one community and refuse them asylum from oppression on the same conditions as other communities. And they are also ensuring that members of the same community within India will be subject to a climate of fear and oppression that will get worse in the wake of this exercise.

A Hindutva Pakistan
The right thing to do would have been to produce a religion-neutral Citizenship Bill, as many parties, including the BJP’s own ally the Akali Dal, suggested in the Lok Sabha. It is a shameless performance by a government that has even last year refused to discuss and create a National Asylum policy, which I had proposed in a Private Member’s Bill and shared personally with then Home Minister, his ministers, and his home secretary. If the Modi and Amit Shah government genuinely cared about refugees, why has it consistently refused to accept the need for an objective asylum policy or come up with one of its own? Suddenly, it claims to be going the extra mile in granting citizenship to some refugees, whereas in reality, they don’t even want to do the basic as required under international law to improve the determination of refugee status or ensure decent treatment of refugees.

A little more than a year ago, I received a great deal of opprobrium for saying that an election victory for the BJP in 2019 would begin to usher in a Hindutva version of Pakistan. The ruling party protested loudly and its members rushed to sue me for defamation; a Kolkata judge even issued an arrest warrant against me for the remark. Sadly, I now sound prescient. A Hindutva version of Pakistan is just what, under BJP rule, our India is becoming.

The author is a Member of Parliament for Thiruvananthapuram and former MoS for External Affairs and HRD. He served the UN as an administrator and peacekeeper for three decades. He studied History at St. Stephen’s College, Delhi University and International Relations at Tufts University. Tharoor has authored 19 books, both fiction and nonfiction. Follow him on Twitter @ShashiTharoor.
Views are personal.
This article appeared in The Print.