COVID-19  In-depth info for Indians in Atlanta/Georgia. Click here
Home > Magazine > Features > Opinion: The Real Fear of a Trump Presidency Has This in Common with the Modi Government

Opinion: The Real Fear of a Trump Presidency Has This in Common with the Modi Government 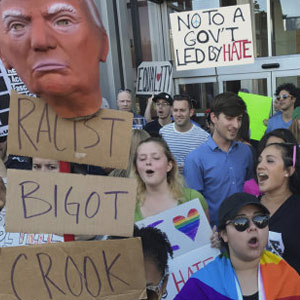 (Left) Protesters hold banners during a rally outside the CNN studios, in opposition to President-elect Donald Trump, in the Hollywood section of Los Angeles on Sunday, Nov. 13, 2016. (AP Photo/Damian Dovarganes)

Trump opened Pandora’s box to fire up his campaign against the establishment.

As Hillary Clinton’s popular vote margin keeps increasing, so do the what-if theories.

What if Bernie Sanders had been the candidate after all?

What if Clinton had spent more time in Michigan?

What if third party voters in Wisconsin had changed their votes?

But all those wistful permutations and combinations will not change the reality. Donald Trump is the President-elect and he will come to office in January for better or for worse.

There are those who chant that he does not represent them but he still remains their President-to-be. Already the media is full of stories about how President Donald Trump is backing away from some of his more incendiary promises, toning down some of his more inflammatory rhetoric. His CBS interview only underscored what is being painted as the Taming of Trump.

He’s no longer in any tearing hurry to “lock her up” when it comes to Hillary Clinton. “They’re good people. I don’t want to hurt them.”

Is this the real Trump? Or is this the new Trump? Or does that just show Trump says whatever he thinks the crowd wants to hear at that time? President-elect Trump might be swerving to the center, moderating his message, calibrating his words. His boasts and vows on the campaign trail are now to be regarded as just opening gambits in a negotiation, not end points. It does not matter because the crowd has already heard what it wanted to hear.

To be fair, Trump is President-elect, not President. He cannot do anything more right now than say “Stop it.” We may even find that some of the provocation might have come from those opposed to him, angry losers spoiling for a fight. Some stories will no doubt be fabricated and fall apart under scrutiny. But every instance of hate violence and racist attacks needs to be documented so they are not brushed away as figments of overheated imaginations and biased media.

It does not change the larger issue anyway. It’s not about Donald Trump, it’s about those he emboldens. It’s about those who bully in his name. And this is an issue we understand first hand in India. A Narendra Modi in office chooses his words carefully, gives lofty high-minded speeches, talks about vikaas and Constitution. But those who are emboldened in his name are the ones who tell critics to “go to Pakistan.” They are the ones who think cow protection can now become cow vigilantism even though the PM himself talks more about plastic tangled in the intestines of cows. And they believe they can act with impunity because their man is now the boss. They assume they have the green signal from up on high. Modi always takes his time in responding to them and he tended to respond with the mildest of reprimands, if at all, as if shaking his head at naughty boys. It suits him fine. And sooner or later, just as we would hear Modi’s surrogates ask if the PM needed to respond to every incident across the country, Trump’s surrogates will ask if their leader needed to respond to every graffiti scrawled across a high school locker.

Trump might have meant, or not meant, or not fully meant many of the things he said in his speeches. It does not really matter anymore. Not to the mixed-race child who woke up the day after the election fearful his father would be sent away. Nor to the person trying to rip the hijab off a Muslim woman. Trump did not manufacture the hate that is spilling over onto the streets. That was always there. But he stoked it. He gave it license and now it’s out on the streets.

A campaign that fanned the worst instincts of xenophobia and bigotry helps mainstream that ugliness as well. It’s no coincidence that after the Brexit vote there was a 41% jump in reported religious and racial abuse in the UK. What’s worse is now the ugliness is being flipped on its head and blamed on the media. The media demonization of Trump, we are being told, is responsible for the postelection turmoil. As if the KKK’s triumphant victory marches are because the media had reported on racist sloganeering and comments at Trump rallies.

To put it simply, Trump might not like the KKK but his victory emboldens the KKK to stage victory marches in public just as a Modi might have no truck with a Hindu Sena but they are energized by him. Not all Trump voters are KKK by any means, but KKK is enthused by Trump for sure. That display of KKK power is not approved by Trump [according to a statement issued by his campaign], but his victory, and more importantly the tenor of the campaign that led to that victory, makes this display of muscle possible. That is the danger America faces right now.

Trump opened Pandora’s box to fire up his campaign against the establishment. It worked spectacularly. Now as President-elect he can try and shut it, but the “deplorables” have all come out and gone to victory rallies.