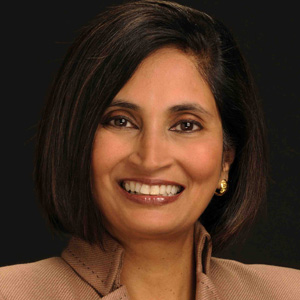 The woman in Silicon Valley with one of the most powerful names in tech just got more powerful. Padmasree Warrior, who until September served as chief technology and strategy officer at Cisco Systems Inc., the world’s largest maker of data networking systems, announced this week that she is the new U.S. CEO and global chief development officer of NextEV, a fast-rising Chinese electrical vehicle start-up that’s building an all-electric “supercar” to comp- ete with Tesla.

Once hotly tipped to be the CEO of Cisco Systems, Warrior’s appointment this week as the U.S. boss of NextEV put to rest whispers circulating in the Valley about her becoming the new CEO of Twitter. The 55-year-old Indian-born executive, who has spent her career at Motorola and Cisco, said she wanted to try a new field where her 30 years of technology experience would still be relevant.

“Many verticals are about to go through mass- ive change because of technology,” Warrior told reporters, further contending that no industry is as ripe for disruption as transportation—all the more reason she was drawn to NextEV. The company, she says, will “apply technology to solve fundamental problems” like climate change and global pollution.

“I wanted to be part of creating something that is bigger and different,” added Warrior, who is agg- ressively hiring in San Jose, California, where the car maker has an 85,000-square-foot research and development center. She says the firm is focused on picking the best U.S. talent in software, artificial intelligence, robotics, and data sciences.

Founded in 2014, NextEV has hired 400 employees to date and has research and design centers in Shanghai, London, Hong Kong, Munich, and California. The Chinese car maker has already developed a single-passenger race car that has competed in the FIA Formula E races for electric vehicles. It also wants to build the first truly mass-market electric car.

The Supercar
First, though, the company hopes to deliver what it calls a “supercar,” a 1,360-horsepower speedster that would compete against high-end sports cars.

“We’ll be targeting what we call a supercar with very high performance targets, to be in production at the end of 2016,” Warrior told Fast Company magazine.

“The intent with that car is primarily to check out the performance, assess the technology, and reuse a lot of that in the mass-market vehicle that will be following it,” she added.

Warrior believes that “increasingly, it’s not about knowing all the answers but asking the right questions and figuring out how to get the right answer.”

“Our vision is not just to build an electric vehicle, it’s really to think about the entire automotive industry vertical and really rethink that industry asking, ‘If you were to build an automotive company in the Internet era, what would it look like?’ That’s the challenge that we are setting ourselves up for,” said Warrior, who intends to drive her cherry red Tesla Model S car till she builds her own NextEV car.

Breaking Boundaries
After growing up in Vijayawada, Warrior got her B.S. in chemical engineering at the Indian Institute of Technology in New Delhi. She was one of five women in an engineering cohort of 250 students. Warrior then moved to the U.S. at age 22 to study for her Masters at Cornell University. She has come a long way from her start in the U.S. when she arrived at Cornell with $100 and a one-way ticket.

While planning for a doctorate (Warrior wanted to be a professor), she took a job at a Motorola semiconductor plant in Arizona, where she again was one of only a few women working there at the time. Though she planned to stay one year, she stuck around for 23. Rising through Motorola’s ranks, she became chief technology officer in 2003 and made Fortune’s annual Most Powerful Women rankings.

Warrior has gone on to smash formidable barriers in Silicon Valley, but has noticed few women rising through the ranks along with her. When asked about the specific challenges women in leadership roles face in the tech world, Warrior told a technology conference that “Women have to overcome more barriers. We don’t get as many passes as guys do. A woman in engineering and STEM fields almost has to outperform her male peers to get recognized. It’s unfortunate, but that seems to be the norm.”

Warrior sounds hopeful about the future for women in the tech sector. “As you see more women leaders in the field, that will change.”

Warrior’s long and successful career in the tech world has earned her widespread recognition, including commendations from the Women in Technology International Hall of Fame and Forbes magazine, which placed her on the list of 15 Most Powerful Women in Technology for 2013.

Warrior is on the boards of Gap, Box, and Microsoft. And now she will join the NextEV board as well.

A wife and mother of one grown-up son, Warrior mediates, paints, and dabbles in Haiku poetry to unwind. She also gives her legions of Twitter followers an insight into her world outside of the office, posting novels she’s reading and images of her paintings.