Spotlight: Byte by Byte, the Graph of Success 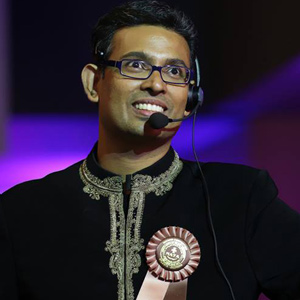 The man with a smile…and ambition.

With his trademark, full-on smile, Prashant Kollipara is no stranger to the community. But what is the secret behind his rise, in just a few short years, from a photographer to an entrepreneur overseeing dozens of professionals of photography, videography, lighting, and audiovisuals?

There have been many successful photographers and videographers serving the Indian community of Atlanta. Some of them are also passionate artists and technicians of their craft, capable of delivering memories captured on paper or film that would be cherished for a lifetime.

But few, either inside the profession or outside, dared to imagine photo and video services within the community as a scalable enterprise engaging dozens of professionals to serve over 1,000 events a year! It is this that distinguishes ByteGraph—and its dynamic founder, Prashant Kollipara—from the rest.

Early Days
Growing up in Hyderabad, Prashant recalls that he was always fascinated by the interplay of light and sound. In his spare time, there was nothing he loved more than working on the circuits of a record player, a tape recorder, or boom box. Cameras, of course, were an intrinsic part of this fascination. Beginning with his father’s old camera, and moving on to new ones owned by a friend or visiting cousin, he’d never pass up a chance to click photographs. Apart from this deep-seated love of audiovisual gadgetry, Prashant also had an innate sense of aesthetics and design that found expression in decorating his home on festival days, beautifying his classroom at school, or doing up spaces for birthday parties and small celebrations.

Prashant’s career path however, followed that of the archetypal Indian-American. His skill with circuitry had him picking up a college degree in Electrical Engineering after which he joined the IT industry. Here, too, the bright young man made a mark, working for the top IT companies of the time including IBM and PriceWaterhouseCoopers, travelling the world and finding a place among the IT teams setting up Internet portals. During his stint as Senior Architect in PWC he began dabbling again with sound system circuitry and cameras.

As the saying goes, “You can run, but you can’t hide from your real self,” and that’s what happened to Prashant. It was pure serendipity that he met several of India’s top cinematographers at a film studio during a family trip to Hyderabad. It was a eureka moment for Prashant as he realized that his true calling lay in a field other than his chosen profession, one that had deep, strong roots in the creative endeavors of his childhood.

In 2004, he took the plunge, with the formation of his new company, ByteGraph Events. It was an appropriate moniker for Prashant’s vision of a three dimensional enterprise that would bring together “Art, Technology, and People”—capturing the graph of individual lives in bits and bytes, blending light and sound to create beautiful memories and experiences.

Like every startup, ByteGraph had its share of growing pains. “Initially it was very difficult as I was the face of the company and had to manage all the functions from sales to operations. Now, it’s easier.” His past corporate experience helped the young entrepreneur through the initial struggle to make a mark. Now, over a decade later, Prashant manages the myriad functions of production from video, visual, and audio to stage lighting, design, and more. While weddings form a large segment of his portfolio, Prashant also handles a range of events including conferences, social do’s, and concerts, among others.

Big Is Better
Scaling up was always a part of the dream, says Prashant, and to this end he kept investing more money in the business even though profits were low in the early days. Today, ByteGraph has three offices, in Atlanta, San Jose, and Dallas. Starting off with about 50 events a year, the company now sets a blistering pace with some 1,000 productions annually across the country. About four years ago, the company forayed into LED walls. “We are pioneers in the Southeast for this,” says the proud entrepreneur.

How has this remarkable scaling up worked out for Prashant? “When I was working before for Big Five [IT] firms like PWC, IBM, ESMAS, and others, I learnt that the only way to scale up is to be innovative and invest in new services and technology.” 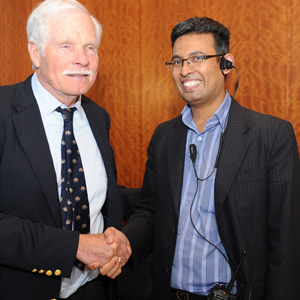 Meeting famous people is all in a day’s work. Seen here with Ted Turner.

Personally Speaking
What’s a typical day like for this multitasking entrepreneur? His schedule begins at 5:30 a.m., zipping through a high volume of emails that he receives every day. Mostly, these are marketing leads. “I keep track of each event [that they undertake]. I travel to my offices in all 3 cities on an alternate-week basis and make sure that the operations are going as planned. I spend a good amount of time with Praveen Yarlagadda, another pillar for ByteGraph, who takes cares of operations not only in Dallas but also oversees all the events and helps in planning. As we are into both social and corporate events, we have to satisfy both [segments] with great customer service, which involves painstaking effort from every department in the company.”

Kollipara confesses that running an enterprise of this scale has impacted family life. He says, “There are countless hours I have spent [away from the family]. I have really missed my wife and kids. Without my wife Madhuri’s support it would not have been possible. On a personal front [I] have lost [touch with] a lot of my friends and family members because of my hectic schedules. But some sacrifices are needed in anything you take up in life.”

His hectic schedule means that Prashant is also unable to indulge his love for still and video photography, something that he misses greatly. 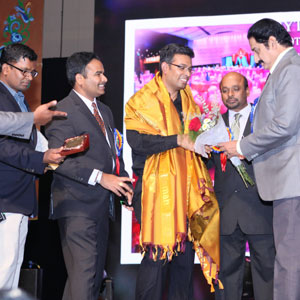 Being duly recognized for his contributions…

Making One’s Dreams Come True
It’s often said that one can either be a good technician or a good entrepreneur. Prashant begs to disagree. “I think anyone can be anything if he is passionate about his calling. Interest changes as time passes and even when I was with PWC, involved with [both] technology and strategy, I was very successful in a very short amount of time as I was totally passionate about the work which I was doing. If you know what you are doing 100%, it can take you to the next level. It does not matter what your background is.” Expanding more on his philosophy, Prashant says, “Everyone can make their dreams real. Where there is a will, there is a way. You just need to know what ‘tickles’ you.”

Looking Ahead
Typically, with business success comes a degree of complacency. Not so for this entrepreneur, who remains as driven as he was at the inception of his enterprise. The company’s meteoric growth and nature of work means there’s simply no way to sit back: “Initially, managing small teams was very easy. Now, the teams are huge…managing such teams is always difficult.” Prashant has a basic strategy to ensure smooth cooperation and clockwork precision among his teams—by inducting only those who are as passionate about their work as he is.

Clearly, the sky isn’t the limit for this magician of light and sound who’s a rare combination of creative brilliance and business savvy.