By Shyamala Rao and Lisa Matheson 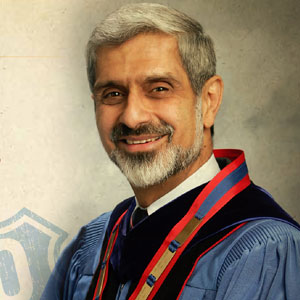 This ace educator transformed a sleepy, small-town college into a university par-excellence—and in the process, made it cool to “Go West” again.

When Dr. Beheruz N. Sethna accepted a position as president of West Georgia College and arrived in Carrollton, Georgia, in 1994, it didn’t look like he would stick around for long.

After all, his credentials were good enough to guarantee him tenure at any top-notch university: his Ph.D. and Master of Philosophy degrees were from Columbia University, and he’d earned his bachelor’s degree with honors in electrical engineering from the prestigious Indian Institute of Technology, Bombay, and his MBA from the Indian Institute of Management, Ahmedabad.

Despite his impeccable credentials, the search committee that eventually picked him must have nevertheless been apprehensive—wondering how this urbanite from the other corner of the world would fit into the culture of small-town Georgia. Perhaps that’s why the Chancellor and two Regents came to Texas (where Sethna was at the time) to interview his colleagues, students, community leaders, the mayor, and the newspaper publisher.

When the 20-member committee voted to pick the candidates, every member voted for him. They were struck by his enthusiasm and preparation. Clearly, he was the man for the job. But was this the job that would keep him happy?

A little-known college and a Southern small town hardly seemed the place for somebody with that kind of resume. Everyone thought he’d move on to a bigger, better, and more prestigious place soon. “They were correct. I did,” says Sethna, with a laugh. Only, together with the faculty and staff, he built the college into the “bigger, better, and more prestigious place” that it has grown into.

In his 19 years at West Georgia, Sethna helped build the school from a modest liberal arts school of 7,947 students to a full-fledged university with 12,000 undergraduate and graduate students, recognized not just in Georgia and the Southeast, but nationally as well. In fact, it would be no exaggeration to say that to many in the metro Atlanta area, University of West Georgia is synonymous with the name of Sethna, who announced his retirement as UWG President in June this year.

“You can’t measure the impact that President Sethna has made on the institution, the region, and even the state,” says Carrollton Mayor Wayne Garner, who has worked with Sethna nearly every week since the latter first joined the college. “He fell in love with the community and made West Georgia his life’s work. I would hate to be the one to follow in his footsteps.”

For Sethna, the decision to retire as president wasn’t easy. “It has been my honor to lead UWG,” he says. “But I believe it is time to pass the torch of leadership. I will continue at UWG in my capacity as professor of business administration. In addition to being able to spend more time with my family, I intend to spend summers teaching English and science at Balgram, an orphanage in India.”

“I am the only President in Georgia and one of a handful in the nation who has taught a sole-instructor course every year for 19 years,” says Dr. Sethna about his insistence that all administrators at his university must also teach as part of their jobs.

The 64-year-old academic is currently the longest-serving university president in Georgia among both public and private institutions. He is also believed to be the first person of Indian heritage to head a university in the United States and the first ethnic minority to do so in Georgia.

“Dr. Sethna has elevated the reach, brand, and esteem of UWG throughout Georgia, the Southeast, and nationally,” said University System of Georgia (USG) Regent Ken Bernard. “Dr. Sethna was and is passionate about teaching, and this carried over in all his efforts, both at USG and throughout his tenure at UWG. In fact, he made it a priority that all administrators taught as part of their jobs. He will be missed, but his presence as a faculty member will be immensely valuable to UWG.”

UWG Foundation Board of Trustees member Phillip Kauffman, who has known Sethna since he arrived in Carrollton, compares him to some of the greatest sports and business legends of our time. “Dr. Beheruz Sethna is to what once was a college and is now the University of West Georgia what Michael Phelps has been to the swimming community. He is what Bill Gates has been to the business community. He did more in the last 18 years than was done in the previous 82 years.”

Sethna, who was voted one of the 100 Most Influential Georgians six times since 2003, credits the UWG team for the university’s success story. Under his leadership, the university went on to record some major accomplishments, including securing approval to be classified as a SACS (Southern Association of Colleges and Schools) Level VI university—the same level as Emory, Georgia Tech and the University of Georgia.

In retelling the story of how Sethna has helped UWG grow from a humble college into a doctorategranting institution, West Georgians acknowledge his role as a visionary. But acceptance in the community had not always been so ready. Sethna acknowledges that when he first arrived in the region, there had been resentment against his appointment to the prestigious position. “I did not know about this until I had already come here,” [but] “some very well-connected people petitioned some Regents and the Speaker of the House, the legendary Tom Murphy, not to hire someone who had so many strikes against him in terms of ethnicity, race, national origin, and religion. Fortunately, the Chancellor, Regents, Speaker, and search committee leadership stood tall and did not bow to such pressure.”

Paul Cadenhead, a life member of the UWG board of trustees is amongst those that honor Sethna for his exceptional work in the community. “The university is a monument to him. He came when it was just a college and he made it into the great university that it is today. He’s taken on the big guys— like Harvard—and beaten them in certain categories. In raising the educational standards, in the physical expansion, and in regional and national recognition, he’s made the university what it is,” says Cadenhead.

The physical expansion that Cadenhead speaks of is evident in many structures such as the new nursing building, expected to be completed by fall 2013; the visual arts building that opened in August; the athletic complex, which includes facilities for football, basketball and baseball; the Greek Village, a residential housing complex for students in social fraternities and sororities; Center Pointe Suites, a new residence hall complex located in the center of campus which opened this fall and houses more than 600 first-time students; and the new residence hall complex and dining facility being built on the east side of campus.

The university’s stupendous growth under Sethna’s leadership has changed the community not just on the academic front but economically and socially as well. United Community Bank President and CEO Tim Warren believes the growth has “had an immediate and lasting impact on our local economy and quality of life in the West Georgia region, as the university generates millions of dollars for our local economy annually.”

“Dr. Sethna is also personally involved in civic clubs and organizations, and more importantly he encourages the staff and professors to become involved in our community, and to take on leadership roles that make a positive difference in our region,” observes Warren, who has known Sethna through community projects, and also by serving on the board of trustees for the past six years.

Others like Robert Stone, who worked with Sethna closely on the university stadium project, are quick to acknowledge the latter’s close involvement in every facet of UWG life. “He is a very personable guy,” Stone says. “He has the students’ best interests at heart. He is not a typical university president who sits in his ivory tower surrounded by books. He is a very hands-on leader.

“We are going to have to be extra careful—whoever is on that search committee—I hope they can find someone who can continue [his] vision or at least can parallel [his] vision.”

Asked if it was a specific dream to build UWG into what it is today, or if the vision took shape slowly, along the way, Sethna responds, “At the time I arrived, West Georgia was still a college, and a couple of other colleges had been made into universities a few years earlier. So, morale was low both at the institution and in the community. So, my first priority was to lead us to university status. But the vision was bigger than that. In my very first address to the faculty (in 1994), I urged us to find a few selected areas of excellence in which we could compete on the national stage. I mentioned that we had once competed against Harvard (we hadn’t won, but we had competed) in the field of academic debate and that the day would come when we would do well even against Harvard. Most people thought I was crazy.” But sure enough, Sethna’s bold vision came to pass, and today UWG has earned national recognition in the field of academic debate, besting Harvard more than once and winning two consecutive national championships.

He is particularly proud of UWG’s initiatives in encouraging undergraduate research. “The imparting of content knowledge in the best universities is now only a necessary condition for success—it is not a sufficient condition. The best student in the best university taught by the best professors will find that knowledge at least partially out of date within a very few years. So, the better gift to give our students is the ability to acquire new knowledge. The best universities encourage undergraduate research as a great way of doing that. Not to convert all students into researchers, but to give them the ability to learn how to learn. UWG is a national leader in this regard.”

It has taken UWG long years of work to evolve into what it is today, but Sethna was always confident that “the driving force—moving from good to great”— would take them there. “From day one, I knew UWG could and would be a great place.” The sense of accomplishment instilled by his leadership is reflected in UWG’s clever emblem that says, “Go West.” The suggestion of course is that prospectors will strike gold—in terms of quality education.

One could perhaps say the university is close to Sethna’s heart in more ways than one: his wife Madhavi Sethna is a UWG faculty member in media and instructional technology. Their children, too, have carried on the tradition of academic and professional accomplishment. Dr. Anita Sethna is a facial plastics and board-certified ENT surgeon who heads Emory Facial Center. Shaun Sethna, a graduate of Georgia Tech and Columbia University Law School, is a patent attorney with an international consulting firm in Houston.

Stepping down as president may give Sethna more time with his family and with Balgram. “Balgram was simply one of several charities to which we contribute, both in the U.S. and in India. That is, until I visited it and saw the tough conditions in which they live, but also their smiles and hopes. I was always looking for some way to give back and hope that I have found it in Balgram.” But the university will continue to be a major preoccupation, and he promises to “remain as charged, as passionate, and as enthusiastic about UWG as when I set foot on campus.”

“We continue to dream and achieve impossible dreams at West Georgia,” Sethna says.