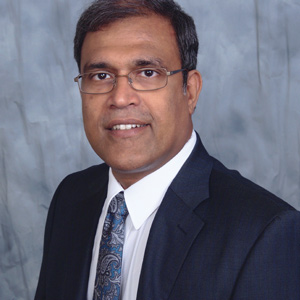 (Left) Syam Yellamraju has been a tireless producer of towering stage productions that bridge the gap of time and space between India’s rich legacy and its budding diaspora in Atlanta.

There is perhaps none who has done more to present and promote India’s legacy in Atlanta. Syam’s is a journey of creativity, passion, and dedication. When he’s done with his day job as an IT executive at a global insurance firm, he gets busy with his other ‘career’—producing and directing elaborate musical theater productions inspired by India’s mythology, cultural values, and great historical personalities.

Remember that old saying, “You can take a man out of the country, but you can’t take the country out of a man”? Looking at the burgeoning number of Indian-origin professionals in the USA who are passionately committed to preserving Indian heritage outside their homeland, it’s clear that this old cliché still carries some heft. Syam Yellamraju, born in Andhra Pradesh and now a resident of Atlanta, is one such professional who has added multiple dimensions to his life, in the process enriching the community around him, particularly through his engagement in the field of theater.

What has Syam’s life journey been like? “Back in 1985, after completing my post-graduation at IIT, like all good kids, I got into Information Technology and took up a job as a programmer. My boss in my first job used to call me “Tiger Programmer” and I really am proud of that title!” Beginning his career in Mumbai, the bright young man quickly shimmied up the corporate ladder to reach a senior management position. He has been associated with several projects that were firsts in the Indian IT industry—a video conferencing initiative (1990) and commercial offshore connectivity, to name two. “I was part of the first Oracle software project in Asia and was also associated with the first three-tiered architecture initiative.”

Later, he began to focus on IT for the insurance industry and now specializes in it. Syam’s strong career graph continued to head north after his move to the United States. He now heads the Life Insurance Business Unit for a global IT software company.

Syam’s love for theater developed early on when he was 5 years old, thanks to his mother’s involvement with a Mumbai literary club. The club members would script short plays and have the young boy act in them. After acting in over 175 plays through the years, Syam turned to direction and production. In 1986, Syam produced his first play in the USA, at Indianapolis. However, professional career concerns took primacy at this stage and Syam could only resume his “theater career” in 1994. 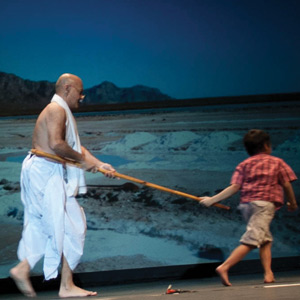 (Left) Bringing the Mahatma to life!

Today, Syam has dozens of productions to his credit. Scripted primarily in English—he’s also done plays in Hindi and his native Telugu—his themes are drawn from Indian mythology and history. His large-scale musical productions on Indian greats like Chanakya, Adi Shankaracharya, Buddha, and Gandhi have received rave reviews from audiences in Atlanta.

Does he try to drive home a point through his choice of subjects? Syam is forthright in his response. “I am not in the business of presenting a ‘moral of the story’ or making a quotable quote. I would consider our play to be a success if after watching the play, people are encouraged to research a particular concept or figure, or if it is able to drive them a bit closer to benefitting from the concepts presented in the play.” 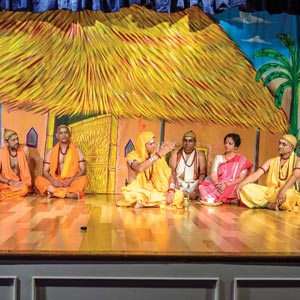 Adi Sankaracharya: “Considering the very little scope for glamor or grandeur, this was a very difficult one to depict on stage. Yet, it was one of the most well-received, and one of my favorites.”

But theater is more than just an engaging hobby for Syam. A perfectionist at heart, he believes in setting high standards of excellence, from ensuring that his plays begin dot on time, to staging them in good quality theaters, using technology creatively, and training a team of 25 people who are now experts in sound, lighting, creating backdrops, and more. A large production may have as many as 100 actors onstage! Another strength of his productions is the detailed research he does on his themes. “To make my plays as authentic and close to the source of literature as possible, I tend to go back to original works of sages like Valmiki, Vyasa, or to a specific purana when I direct religious plays on epics such as Ramayana and on mythological characters such as Arjuna, Krishna, Shiva, and Radha. Producing and directing plays on world class entities such as Chanakya, Adi Sankaracharya, Tyagaraja, Gandhi, and Buddha have personally been a great experience.” 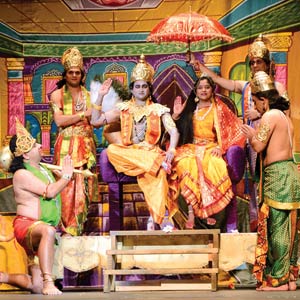 The ever-popular Ramayana: “This climax scene of Shri Ramachandra’s coronation is a replication of the most popular picture of Shri Ram parivar.”

Typically, a single production takes 8-9 months “from script to music to casting to rehearsal to going live on the stage.” Syam doesn’t believe in cutting corners and is clearly a leader who inspires: “Practice does not make it perfect, practice only reduces imperfection. The entire team works very hard to give their best.”

Speaking about the music, one important component of his productions, Syam elaborates, “Music for our shows is custom built from scratch. To have background score for a play in addition to songs is a very rare and difficult thing to arrange. While there have been occasions when we made the music locally, most of the time, the music is produced and arranged in India.”

Such dedication yields amazing results. Syam is both proud and humbled by the impact of his plays and some unexpected spinoffs. “For instance, after we presented the Tyagaraja show, there was a boom in enrollments into classical music classes. After the Chanakya show, a 7th grade kid wrote a class essay on Chanakya (topic was “A leader, living or dead”); this child’s father called to say that he won the first prize in his school. Such stories touch my heart and motivate me to continue my work in theater.” 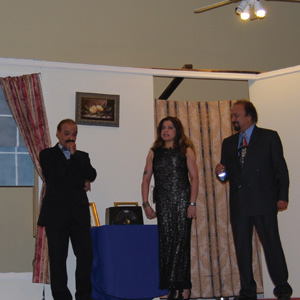 Just for fun: Occasionally Syam dabbles in regular, lighter fare: A scene from "Out of Order," a British comedy.

“Syam is full of enthusiasm and energy. He is, indeed, a powerhouse. I never see him tired or exhausted,” says Dr. Seshu Sarma, a veteran of Indian performing arts in Atlanta. “I don’t know how he has the time to come up with the material for all the plays he produces, one after another, relentlessly. I have never seen a ‘mass producer’ like him. He is surrounded by incredibly talented men and women—like a conductor with a perfect orchestra!”

“I will not be doing justice if I don’t mention Lalitha, his wife. She is the woman behind Syam. With her own talent and ideas, she is not confined to the backstage either. We do see her dynamic presence on the stage as well,” adds Dr. Sarma.

While theater takes up most of his time these days, Syam has also thrown himself into varied community activities. “I used to volunteer for social/community organizations. I have held officer positions in several local, regional, and national organizations. I am also [a] trustee and on the board of a few temples. One thing I was fortunate to do was to go on a volunteering mission to Haiti, through a Catholic church. It was a very touching trip for me.”

He’s a foodie who’s engaged in community cooking, too—“1500 large scale meals for community organizations.” Humorously, Syam attributes his love for food to his mother. “Her concept of taking care of children meant feeding them till stomach full, and then a bit more and then some more.” So what are his favorite dishes? “Vada Pav in Mumbai; Nasi Goreng in Singapore, Bitter Ballen in Den Haag, pâté from Budapest, jalebi from Afghanistan, and a variety of drinks from ‘Scotchland’ says this widely travelled professional. 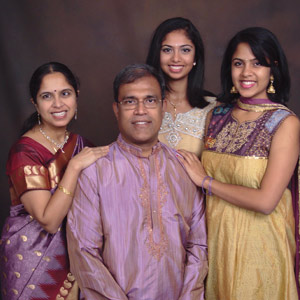 With wife Lalitha, and children Siri and Suma.

For all his involvement with multiple community activities, it’s family first for Syam. “My larger family, inclusive of my parents, has left an indelible mark on my heart and mind and in many ways, molded me into what I am today. I have an older brother and a younger sister, who live in India with their families. I have been married for 27+ years to the same cute girl that my parents selected to be my bride. We have two beautiful talented daughters, who have me completely wrapped around their fingers (and many of their fingers are constantly in my wallet).”

His vibrant personality and redoubtable leadership qualities make him a natural role model. His advice to his daughters and young people is “to work hard and smart. The world will come to them if they do so.”