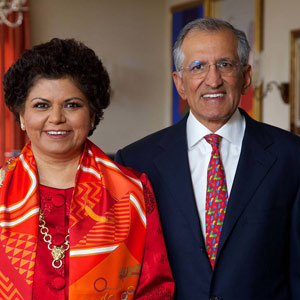 Chandrika and Ranjan Tandon are the latest––and biggest––donors in a line of philanthropists from the Indian subcontinent who have contributed generously to higher education in the U.S. This makes it the largest single donation to NYU-Polytechnic in its 161-year-old history.

Chandrika and Ranjan Tandon wrote out a $100 million check to NYU-Poly, a top engineering school, rooted in a 161-year-old tradition of innovation, in New York University (NYU).

It is believed to be the single largest philanthropic gift by a member of the Indian-American community. NYU President John Sexton announced on October 5 that the school will be re-named the NYU Tandon School of Engineering in recognition of the Tandons’ generosity.

“Ranjan and I are great believers in STEM education, in the applied sciences, and in the analytic and creative disciplines that such an education develops,” says high-profile executive Chandrika Krishnamurthy Tandon, a graduate from the Indian Institute of Management, Ahmedabad.

Tandon was among the first Indian women to be hired by blue blooded corporate consulting firm McKinsey & Co., where she rose to become a partner. She is chair of Tandon Capital Associates, a financial advisory firm she founded in 1992. She also happens to be PepsiCo CEO Indra Nooyi’s big sister.

There are plenty of executives who are accomplished musicians. But among prominent business people, only 61-year-old Tandon can boast a 2011 Grammy nomination. Her album of Sanskrit chants, “Soul Call” didn’t win, but she says she has “purity of purpose” in wanting to share her modern, multicultural take on Indian music with global audiences. She has three more albums on the way.

Her husband, Ranjan Tandon, is an engineer by training and a graduate of the Harvard Business School. He is founder and chair of Libra Advisors, a hedge fund he founded in 1990.

The Tandons said they simply want to give back to a city that nurtured them. “Our Indian tradition teaches us to give back. You can’t take it with you... We are here to serve. This will have a ripple effect beyond one individual school as generations of students will benefit,” says Tandon.

“We want to give back to the city that has given us so much. Our hope is that this gift will bring many more of us together to reinvent engineering, advance New York’s efforts to become a science and tech capital, and foster the talents of young innovators, applied scientists, and entrepreneurs,” she added.

Tandon joined NYU’s Board in 2010 after serving as a member of the board of overseers of NYU’s business school and leading the NYU President’s Global Council.

According to the Wall Street Journal, the NYU Tandon School of Engineering will join other schools at the university that are named for prized donors. NYU’s Steinhardt School of Culture, Education and Human Development is named for Michael and Judy Steinhardt, who donated $10 million to the institute. The university’s Tisch School of the Arts is named for members of the Tisch family, who donated generously to the institution.

“Engineering is at the core of so many aspects of our lives, and the Tandons’ generosity will heighten our school’s already significant transformative role in the economy, medical advances, communications, and applied sciences. It is clear that the School is poised for higher levels of excellence,” said Katepalli R. Sreenivasan, Dean of the NYU Tandon School of Engineering.

“As a fellow native of India, I am deeply moved that the Tandons have chosen to support our path to academic excellence in this way and hope that their gift will inspire other successful Indians wherever they have chosen to live, to engage in large-scale philanthropy,” Sreenivasan added.

Indian American Donations to Universities The Tandons’ gift may be the biggest, but the Indian community both in America and in India has a tradition of generous contributions to U.S. higher education. Indian-American physician and entrepreneur couple Kiran and Pallavi Patel donated $17.5 million to the University of South Florida. In 2010, Harvard Business School received a $50 million gift from the Tatas. More recently, industrialist Anand Mahindra gifted $10 million to Harvard University’s Humanities center in honor of his mother, Indira Mahindra. In August 2015, Tata Consultancy Services (TCS) gifted $35 million to Carnegie Mellon University to support a new facility and scholarships.