The Voice of a Generation 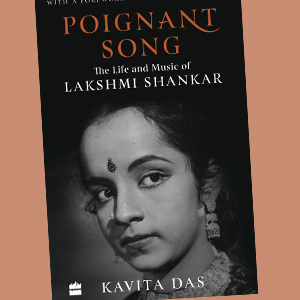 Lakshmi Shankar, perhaps best known for singing on the soundtrack of Richard Attenborough’s Gandhi, received accolades as a performer of multiple styles of Indian music and dance. She toured with George Harrison, and played a major role in bringing Indian music to the West. In Poignant Song: The Life and Music of Lakshmi Shankar, published by HarperCollins India, Indian-American critic Kavita Das captures Shankar’s talent and persistence—and reveals how she was largely eclipsed by Ravi Shankar, her collaborator and brother-in-law. Das gives her the encore she deserves.

Why do you think that, until this book, Shankar’s major artistic contributions seem to have been largely erased in history?

This question motivated me to write Shankar’s biography to both discover the answer while also rectifying the historical record. The main reasons for Shankar’s achievements being overlooked are forces like racism, patriarchy, and cultural politics, in India and in the West. But as I delved deeper and reflected on my own memories of Shankar, I realized she was also someone who put the art above accolades and wasn’t someone who drew attention to herself. So, this, too, contributed to her being overlooked.

She just followed her artistic passion and pushed through cultural and geographic barriers. But when I spoke with her, she was amazed by how she had overcome cultural taboos and how her passion and talent for Hindustani music had taken her all over the world.

Did personally knowing the woman you used to know and love as Lakshmi Mami make it harder or easier to write her biography?

Having known Lakshmi ji personally ever since I was a young girl was as much an incentive as a disincentive to writing her biography. I believed deeply that her fascinating life story should be told so that we have a new, untold perspective on the journey of Indian music to the West—that of an Indian female musician. However, I worried that because I wasn’t a historian or ethnomusicologist, I didn’t have the credentials to take this on. Ultimately, the urgency of documenting and telling Shankar’s life story pushed me past my own fears and imposter syndrome.

What do you think one of her most lasting legacies will be?

I hope Shankar will be remembered as the most prominent Indian female musician in the movement that brought Indian music to the West, earning her legions of fans the world over. She managed to be a cultural ambassador for Indian music, collaborating with musicians from different cultures and musical genres, yet remaining authentic to herself and her art. I can picture her singing alongside George Harrison, in a sari with her trademark large bindi on her forehead. I only wish I had been there in person to soak it in.

Atlanta-based Anjali Enjeti is an award-winning journalist, essayist, and Vice President of Membership for the National Book Critics Circle. Her book about identity is forthcoming from the University of Georgia Press.