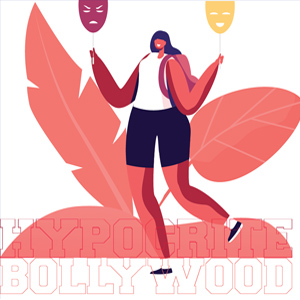 Whether it be in race, caste, religion, or gender, Indian society loves its many biases; but if it is a trending hashtag, some of us are all suddenly woke…at least on social media!

A month ago, a few of our dearest Bollywood celebrities were talked of in what I thought was the most vil fashion. Deepika Padukone, Priyanka Chopra  Sonam Kapoor, Karan Johar, Tiger Shroff, and Disha Patani stood up about Black Lives Matter—and got razed to the ground. Beyond examining the holes in their trendy jeans, they were asked to examine the holes in their activism. How terribly rude! And since they have only an army of image consultants, here I am at long last to speak for them all.

So what’s the big deal about what they said? Isn’t that what we all think? Of course, Black lives do matter. Don’t we all believe in inclusion, secularism and all such abstract nouns? And just when those abstract nouns start taking shape, our darling shape shifters of Bollywood naturally pick up what- ever is trendy. Really, I ask you, if they can choose their latest pair of jeans, why not the latest buzz- word? Our sweet stars are all about trendiness, which is not a sin, right?

They were so busy spending all their time in front of mirrors practicing their wrinkle-free, oh-so-vacuous, sorry, serene expressions, that they failed to realize that while they were talking about color-bias a la BLM season, they have actually been perpetrating it for years.

They got unlucky, is what really happened. Poor babies! It seems they kinda sorta forgot that they endorse skin lightening creams on all media and promote colorism right here in India. And who can blame them for forgetting? See, they are being paid all this lovely money for having their pictures airbrushed, colored, and tweaked until they achieve an unreal—ahem, ethereal—shade of pink whiteness that is the epitome of the ultimate complexion for the ideal Indian. They were so busy spending all their time in front of mirrors practicing their wrinkle-free, oh-so-vacuous, sorry, serene expressions that they failed to realize that while they were talk- ing about color-bias a la BLM season, they have actually been perpetrating it for years.

Or may be not. You have to give them the benefit of doubt. I mean, what if they were saying: “Black lives matter. Black people need to live. And they need to use skin-lightening creams so that it increases the sales of the companies that hire me to sell these, so I will be able to keep making more money.” Now doesn’t that make sense?

Now if you were stretching BLM to mean that it is the inalienable right of all people be what they are, and to live the way they want to that really matters, and by that corollary you expect our celluloid sweethearts to call out our colorism, surely that’s your problem, isn’t it?

And really, what’s the big deal suddenly? In India, we are no strangers to bias. Okay, let’s take the kid gloves off. Who are we kidding? In India, we live with biases on a minute-to-minute basis.

Let’s start with religion. India is a secular country, so every Indian has the freedom to practice any religion of his or her own choice. Under law, we are all equal regardlessof our religion. On the whole, this is largely practiced. We all know and have friends of different religions whose friendship we treasure. But another reality
simmering underneath the bonhomie is that people carry old grudges. What marauding armies and missionaries did centuries ago still lingers in memories, and every religion is regarded with suspicion. Rarely are inter-religious couples ever accepted. Some are actually hounded to death. This is the ground reality, like it or not.

Next is the caste bias. Like the Coronavirus, it is everywhere  though it cannot always be seen or touched. Although discrimination based on caste is strictly prohibited by law, it is still practiced unchecked. You can’t hide your caste even if you want to, because you have to put it down on all applications for school, college, and work. And even before you put it down on paper, almost everyone knows what caste you belong to. I truly don’t know how they find out! In fact, some people and communities even continue to practice untouchability, cloaking it as traditional practices, and in the name of cleanliness etc.

Now one place where caste is fully and proudly on display is the Great Indian Matrimonial arena. There are almost as many matrimonial sites as there are sects and sub-castes in India. Cringe-worthy? Maybe for you. Practical? Of course! Patronized? Naturally!

Okay, religion and caste, even economic biases may exist only outside the home. Inside the home, there should be more parity, no? No!

There is still a strong bias against female children in India. There is plenty of evidence to show that both pre-natal and post-natal selection against girl children goes on in a robust manner in India. Mind you, this doesn’t exist only among the ignorant and uneducated masses. One elderly lady, whose children include a doctor and a scientist, sighed when told that her brother had been blessed with a granddaughter. “A male child to carry on his family name would have been good,” she said, instantly trashing the idea that education dispels such notions. And so, this hateful practice continues.

Many girls are started on Fair and Lovely cream as well as a host of whitening soaps, glow-inducing face washes, and lightening face packs while still in primary school, so it may lighten the skin by the time the child gets to adulthood. Women have continued to use it for fifty years even without results, but are afraid to discontinue lest they darken instantly.​

I’ve seen this bias time and again in my own life. In some families, girl children are tolerated at best. When I was growing up, to be praised that you were as good as a son was the highest compliment. Only boys became engineers; girls should at best become teachers, clerks, or secretaries, so that their first allegiance would always be to their husbands, homes, and families. How does it feel when you are regarded as a burden to your parents, you ask? I’ll keep it simple: it hurts like hell.

One more bias, the one that actually brought on this article, is of ‘color’ or complexion. This is completely all-pervasive and exists in practically every religion, caste, community, and home in India. The cinema, especially in the southern states promotes this to an utterly ridiculous extent, pairing a normal, albeit pinkened, south Indian male with an extremely (and unreally—or do I mean really?—melanin-free) fair, almost ‘white’ heroine from the north of India. And all the dancers in the ‘item’ numbers are from former Russian states. It is truly sickening to watch.

This bias is at its worst inside the home. Of course, a dark boy may have to tone down his ‘expectations’, and a dark girl has to be ready for rejects on the marriage mart. I’ve heard even very well-educated and well- mployed dark girls being told to accept “this boy though he’s not educated or well-employed, because this is the best you’ll ever get.”

Many girls are started on fairness cream as well as a host of whitening soaps, glow-inducing face washes, and lightening face packs while still in primary school, so it may lighten the skin by the time the child gets to adulthood. Women have continued to use it for fifty years even without results, but are afraid to discontinue lest they darken instantly. Girls are discouraged from swimming because that causes tanning. Even boys are kept home from outdoor sports because, let’s face it, they too need to be fair and handsome. When they get on the job market and the marriage mart, boys too need to hook the best and the most lucrative, and for Indians, nothing says handsome as much as a light complexion.

To prevent babies being born with a dark complexion, many highly educated pregnant women too regularly consume saffron-infused milk even today. Their excuse? “It’s for the baby’s welfare. How can I refuse it?” The baby is not even born, but the bias has already begun.

But let’s not be mean to our wonderful all-important Bollywood figures. Of course, it’s not hypocrisy, silly! Or even that other new word: performative wokeness. And who can blame them for forgetting that it was actually police brutality that started it all? I know we haven’t heard them taking up the cause of Bennix and Jayaraj, tortured to death in police custody in Thoothukkudi in south Indian state of Tamil Nadu. That’s because there’s a very simple reason for it. You see, for our dahlings, India starts and ends in Mumbai. So any event is only important if it happens there, or on a foreign location. Now the Thoothukkudi incident would have doubtless stood a better chance if it was in some foreign country that is approached via Timbuctoo and situated near Manama, wherever that is. Or if international media were covering it. But they aren’t, so why care?


Humorist Lakshmi Palecanda moved from Montana to Mysore and is still adjusting. Besides being a regular contributor at The Deccan Herald, she is a published novelist.