Travel: Darjeeling, Queen of the Hills 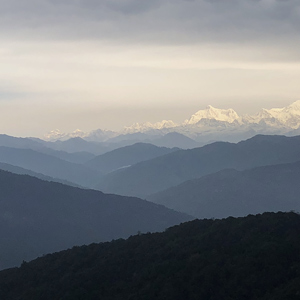 What used to be a sleepy colonial retreat set against tea gardens and the magnificent Kanchenjunga peak is a buzzy tourist town today. But while Darjeeling still pleases the senses and offers a rich array of experiences, the Queen’s robes look increasingly tattered and her crown is askew. How much “development” is too much for this famous hill resort?

Sitting on the back of a Royal Enfield—India’s very own Harley Davidson—we twisted and turned along hairpin bends and steep slopes, soaking in the view of the vast stretch of tea estates. The clouds dipped lower, reaching the tops of tea trees across the road. The snow-clad peaks of Kanchenjunga played hide and seek behind the clouds, never appearing in full glow even once. A cool, crisp wind blew in our faces, drawing with it clouds that enveloped us in their mist. It was an adrenaline rush balancing on two wheels.

As we went further away, a clear patch of human habitation thickly entangled around the slopes became distinct. It was Darjeeling, perched on top of the high Himalayas. It is a mixed feeling looking at Darjeeling from far away, concrete structures smeared all over the pristine beauty of the hills. The expansion of the once sleepy hill town to its present day status has been alarming, evoking nostalgia among the locals for quieter times.

Paulzor Dukpa is a young man who was born a few blocks away from the original home of Tenzing Norgay, the famed Everest climber. Paul’s family has lived here for three generations. The aroma of the original Darjeeling tea surrounded the fourth floor homestay overlooking the Tiger Hills at the far end. I flipped through albums with old photos of Darjeeling as the sun kissed its first rays on my colorful kettle and the steam created swirling designs in the air. Paulzor said with pride, “Darjeeling is an ethnic kaleidoscope,” a nod to the diverse communities who have flocked here over time and developed it as the “Queen of the Hills.”

For centuries, Nepalis such as Norgay have lived in peace and harmony around the Darjeeling hills. Additionally, there are several generations of Marwaris, Muslims, Tibetans, and Biharis for whom Darjeeling is home. The curio shops, meat counters, and bakeries of Muslims, the kirana shops of Biharis, and the ever tasty momo and thukpa stalls along the mall owned by the hardworking Tibetan refugees are all integral elements of Darjeeling’s ethos. 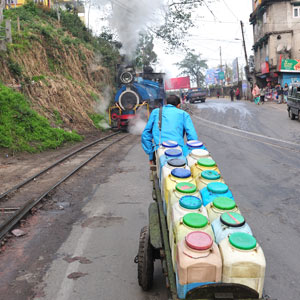 Paulzor is a millennial and is rational about his native town. He understands that tea is the heart and soul of Darjeeling life, and tourism is its backbone. Yet, he is also aware of challenges the city faces, from water scarcity to human trafficking and excessive tourism. Darjeeling has come a long way since 1864 when the British decided to set up a military outpost. The area around the hills quickly grew into a summer retreat for colonials who wanted to escape the heat of the plains. The climate proved ideal for cultivating tea, and today tea is the second most consumed beverage in the world after water, worth over 40 billion dollars worldwide. Darjeeling has a fair share of the international tea market. 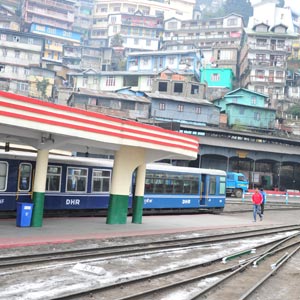 Getting to Darjeeling was not the easiest thing to do, way back in the 1880s. The British, for their convenience, introduced a narrow-gauge steam engine railway from New Jaipaiguri to Darjeeling. Considered an engineering marvel and awarded the UNESCO World Heritage status, the locomotive remains one of the star attractions for visitors. Tourists throng to the historic train station and hop on for a joy ride to the highest train station in Ghum, about 90 minutes away, a sedate, yet delightful journey captured on celluloid in many Bollywood films. Who, for instance, can forget the lilting strains of “Mere Sapnon Ki Rani,” when Rajesh Khanna romanced Sharmila Tagore alongside this iconic train?

The slow steam engine train ride to Ghum can sprinkle soot, yet the vistas, life, and people along the way make it an enchanting experience. The train passes through the town alongside the road and within touching distance of houses and stores, unlike any other train ride in the world. I was often tempted to purchase something from the vendors selling a variety of commodities on the side of the train as it chugged along.

The Darjeeling hills are unique from an environmental perspective. The relief varies from 100 m above sea level to the mighty Kanchenjunga. The flora and fauna around the Eastern Himalayas are “expansive and unique, and our emphasis is on conservation and education,” said Uday Chand Ghosh, a scientist at the Orchid Centre. The hills are home to endangered animals like the red panda along with plants like rhododendrons, memory orchids, and medicinal herbs. With the rapid urbanization of the area, however, the future of such endangered fauna and flora is in question.

Paulzor turned out to be a knowledgeable local with whom to explore the town. Walking along the busy Chowrastha, the main town square, towards Mahakal Mandir, he proclaimed, “Today Darjeeling is in decline.” Narrow twisting lanes, far too small for the cars that now drive them, carve into the hills. Every house around the town is a homestay catering to tourists. Vikas Pradhan caters to the growing demand of homestays in Darjeeling. He is actively promoting sustainable and integrated agriculture around the hills and feels the problem of water scarcity has reached its peak. He said, “No one does rain harvest around here!” This town was never meant to accommodate the over 250,000 people who now crowd into it. The once renowned Darjeeling oranges have been wiped out. 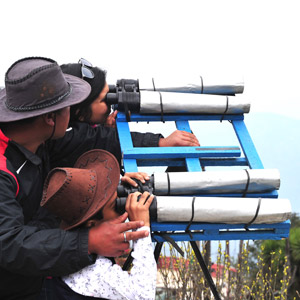 For longtime residents like Rinzi Lama, growing up in the by-lanes of Darjeeling has been the foundation of their success. “Schooling is still the best here and I always feel I am lucky to be a hill town girl; some of the old schools started by the British attract the best talent for success,” she said. “Change is inevitable though, maybe for the good,” she added with a hint of optimism.

“Brand ‘Darjeeling’ today is overused for tea from every corner of the world,” feels Vikram Gupta, a tea exporter. His unique tea blend is exported to over 35 countries for an elite international clientele. Thousands of tons worldwide are stamped with the label “Darjeeling.” He said, “A consortium has been created to protect the brand by establishing strict guidelines to carry the pedigreed label.” 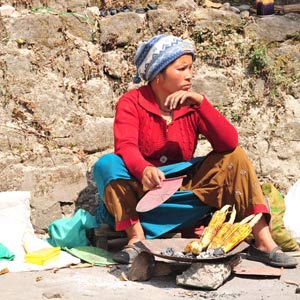 (Left) Roasting corn on the cob.

Darjeeling literally comes awake at the Chowrastha, the four-lane corner. One side of the road leads to Mahakal Mandir, a temple where both Hindus and Buddhists come together to pray. The other side of the road leads to Tenzing Norgay Circle. Wooden benches around are filled with locals, tourists, monks, and dogs who seem to make it their permanent home. Hawkers sell toys, tea, peanuts, and corn heated on coal.

In Chowk Bazaar in the lower part of the town, Darjeeling is abuzz with business by mid-day. There are no locals here. A variety of restaurants dish out a range of foods from Tibetan breakfast to Nepali thali. Tea is sold in every second shop, inside and outside. Tea leaf, be it the original Darjeeling or otherwise, is sold in a variety of glitzy packages. It is hard for an average tourist to identify its authenticity or the harvest.

My interest in postal history took me to the lawns of Windermere Hotel. The vintage hexagonal mailbox clearly proclaimed its British origin. Built primarily for British planters around the 1880s at the highest point of an observatory hill, Windermere Hotel has tried hard to retain the old world charm of Darjeeling. Fading black and white photos and framed letters grace its walls. From its wide-open vistas to white gloved waiters and late evening teatime, Windermere’s cottages can throw up many romantic moments for the visitor, in trademark Darjeeling style.

An hour away from uptown Darjeeling, Vikas Pradhan took me to the campsite near Rangeet River. Other than a hands-on understanding of tea leaves and their harvest, his passion is to talk about the environmental impact of development, sustainable agriculture, and local people. It was an invigorating education that ranged from the harvesting of Trigona honey to exporting natural loofa from the environs of the Darjeeling hills. Education of this nature is critical for the future of Darjeeling, going beyond toy trains and tea harvest. I learned of Darjeeling harvests, four in a year, each of them producing different grades of leaves that can be transformed during processing into black, white, green, or oolong teas.

My weeklong sojourn in Darjeeling was an unexpectedly delightful kaleidoscope of experiences—from stories of Tenzing Norgay’s grit and heroism to tea tales, vistas of blooming orchids, Beatles music, red pandas, and toy train rides! There was just one item left to tick on my to-do list—viewing the Kanchenjunga in all her majesty. On my last evening, at the Revolver homestay, I listened to a Beatles number on my playlist, “Here Comes the Sun.” Oddly enough, I was staying at the John Lennon Room that had as its backdrop, the third highest peak in the world. Vikram Pradhan came hurriedly to say, “Come and see the Kanchenjunga, the sky has cleared up!” It was a moment of magic. As the clouds disappeared, a ray of sunshine kissed the Kanchenjunga. The rhododendron flowers smiled in full bloom. The toy train’s steam engine whistled faintly somewhere along the bend, while close by, the aroma of Darjeeling tea wafted past me. A quintessential Darjeeling moment!

Bhaskar Krishnamurthy, an award-winning photojournalist, is the author of Balarama’s Story: An Elephant’s Journey (Peppertree Press), an illustrated children’s book. He co-produced Elephants in the Coffee, a documentary that won honors and wide acclaim. Based in Kansas when he’s not traveling, Krishnamurthy is involved in initiatives that help people who have never had electricity in remote corners of India.