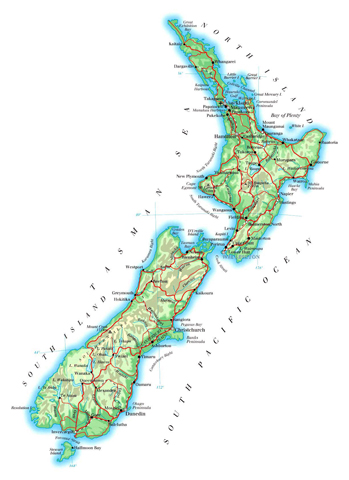 Australia and New Zealand were in the news recently for the wrong reasons: raging fires and an active volcano. Despite these tragedies, the Antipodes have much to offer today. New Zealand, seemingly remote, has attractions ranging from spectacular, selfie-friendly scenery to vibrant cities, adventure sports, and a happily laid-back ethos. The multicultural nation is home to a growing Indian community and sports desi restaurants in every city.

My first visit to New Zealand in 2007 was under grave circumstances. A close family member had passed, and I was summoned for the funeral. Like many Indians, my uncle and aunt had immigrated from north India to Hamilton (the country’s fourth most populous city) in search of better opportunities. As new immigrants, they received subsidized education, medical, housing, and many other benefits that helped them establish their lives.

Though the moment was somber, I met many of my family’s South Asian friends and relatives who were living in different parts of the country. Each person shared similar opinions of their life in this remote country. They loved driving through fragrant, wildflower lined highways, scarce traffic, and pure, clean air. Work-life balance was great, and salaries much higher than those back home. They could also afford to live in nice homes, purchase cars, and give their kids a good education.

Indian New Zealanders or “Indo-Kiwis” are the fastest growing ethnic group in New Zealand. Most of them are of Punjabi or Gujarati descent, followed by speakers of Fiji Hindi. One of the main attractions for immigrants is high paying jobs, especially ones that require manual labor, as the country has more sheep and cows than people. Farmers can earn as much as six figures and are not considered “blue collar” workers.

A NEW PERSPECTIVE
Over a decade later, my husband and I finally had the opportunity to explore New Zealand in depth on a two-week tour curated by Aroha Luxury Travel Company. Prior to my arrival, German-Kiwi tour operator Veronika Vermeulen spoke with me on the phone to discuss my interests and customized a package to the North and South Islands. Having worked with international customers for over twenty years, she had deep knowledge of different ethnic groups and their preferences for diets, budgets, accommodations, and even appetite for adventure.

We escaped the mainstream attractions and got on a road trip starting in Auckland, and made our way through rolling hills, sheep farms, isolated beaches, pristine coves, and luxurious private lodges.

NORTH ISLAND
Auckland is the largest city in New Zealand and a good starting point to explore the North Island. In recent years, Auckland has transformed into a multicultural destination with award-winning restaurants, bars, and clubs.

The best way to orient yourself to the city is from the sky. Take a scenic seaplane ride over the Hauraki Gulf, Auckland Harbor, Rangitoto crater, and Motutapu, to see how most locals live within a few minutes of beaches, vineyards, and hiking trails. 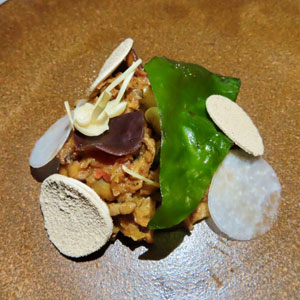 Shredded Morel Mushroom Curry is just one of the delights at Sidart, rated as one of New Zealand’s top restaurants for the past three years.

I was surprised to find an Indian restaurant at practically every corner, even in some of the smaller towns. Named one of the best restaurants in the country for the past three years, Sidart is a cozy Indianinspired restaurant using fresh and sustainable New Zealand produce. Chef and owner, Sid Sahrawat attended culinary school in Chennai, traveled around the world, and opened three acclaimed restaurants in Auckland. The five-course Discovery Menu, which included modern and flavorful treats like Prawn Balchao Tart, Fried Macadamia Crusted Fish, and Shredded Morel Mushroom Curry, was one of my most memorable meals of the year. 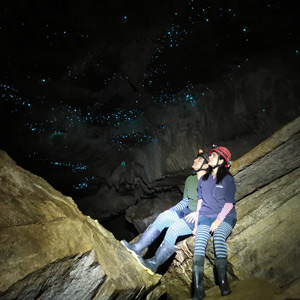 (Right) Looking at glow-worms, not the stars! The author and her husband at Waitomo Caves, a notable attraction.

One of the major attractions near Auckland is the Waitomo Caves, a network of underground limestone formations that are home to thousands of glow-worms. There are options for rafting, zip-lining, or hiking through the dark caves to see these magical creatures up close, lighting up the dark caves like brilliant stars in the night sky. 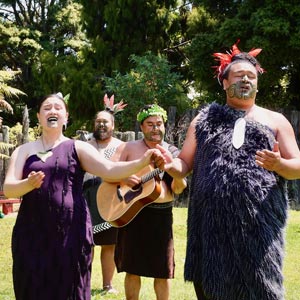 We drove further inland to Lake Rotorua, known for bubbling mud pools, shooting geysers, and natural hot springs, as well as a large concentration of Maori people. The Maori are the indigenous people of New Zealand who came from Polynesia in the 1300s. Today, they make up 17 percent of New Zealand’s population. At the lake, I was welcomed by people wearing feathered headbands and animal skins. They sang and danced on ancestral Mokoia Island, bestowing a powhiri or official Maori welcome.


New Zealand’s cuisine is based on British, Mediterranean, and Pacific styles of cooking, though driven by local and seasonal ingredients. Fish and chips, meat pies, roast lamb, smoked fish, fresh salads, hokey pokey (honeycomb candy), and pavlova (meringue and fruit dessert) are some of the most popular dishes. Driving through the countryside, we would often stop at gas stations or highway restaurants for lunch. Even takeaway counters offered Indo-fusion dishes such as chana masala pies and chili chicken patties. Staying at private lodges meant meals were especially prepared for us and the chefs would get our dietary preferences prior to arrival. They catered to vegetarian, vegan, gluten-free, and lactose-free diets, using homegrown herbs and vegetables. “We also take our clients to the supermarkets, so they can cook at the hotel apartments if they want to,” says Vermeulen about her South Asian clients.

SOUTH ISLAND
For decades, the turquoise lakes of Otago, the magnificent landscapes of Lake Wakatipu, and the clock tower of Christchurch have attracted Bollywood films. Kaho Naa Pyaar Hai, I Hate Luv Storys, and Players are some Hindi films that have helped raise the profile of New Zealand as a travel destination.

Snowy mountains, alpine lakes, longest glaciers, and evergreen forests make Queenstown an idyllic location for honeymooners, nature lovers, and adrenaline seekers. This hip town is known as the adventure capital of the world and offers a myriad of activities that can push you to your limits, including jet boating, bungee jumping, rock climbing, canyoning, abseiling (rappelling down a rock face), paragliding (jumping from a plane or cliff to glide under a fabric sail), heli-biking (taking a helicopter up and biking down a mountain), skiing, and snowboarding. 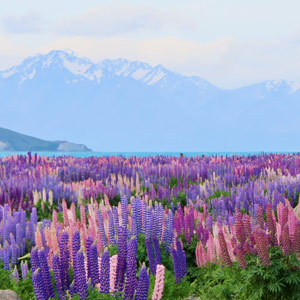 (Left) A field of lupins near Lake Tekapo, which is a big draw for Indian filmmakers.

One of the most magnificent sights to me was a field of blooming lupin flowers against the backdrop of the milky, turquoise-colored Lake Tekapo, and-snow covered Mount Cook towering behind. Part of a UNESCO Dark Sky Reserve, this region of Canterbury is also a good spot for stargazing. At Mount Cook Lakeside Retreat, my host family offered a rare opportunity to see Saturn, Jupiter, the moon, and constellations from their 6” refractory telescope from a wine cellar observatory.

New Zealand wines have gained international accolades, and vineyard tours are a huge attraction for wine lovers from around the world. Marlborough is the country’s largest wine region, with exquisite Pinot Noirs to intense Chardonnays, while Central Otago is the world’s southernmost commercial wine growing region.

Around here, you can also sail around the Marlborough Sounds’ 1,000 miles of coastline, bays, beaches, and native forests, fishing for green-lipped mussels, oysters, salmon, whitebait, abalone, and crayfish. The area is abundant with wildlife, from penguins and rare King Shags to dolphins and fur seals.

New Zealand is a bucket list destination for many travelers. Even though it’s a small country and a long way to get to, it offers a variety of experiences. Whether you enjoy nature, adventure, food, wine, or culture, there is something for everyone.

TIPS FOR TRAVELING TO NEW ZEALAND

The Kiwis are very friendly people and pride themselves in paying high wages to quality guides and tour operators, and bargaining will cause angry reactions. You don’t need to pay tips, but accept that there’s a set price for goods and services.

Be punctual
One of the things that South Asians struggle with, according to Vermeulen, is leaving on time for tours and activities. Even if you have booked and paid for a tour, they won’t wait for you if you arrive late.

Get away from the crowds
Recently, overcrowding at tourist locations has become a huge problem, leading to long lines, congested trails, and frustrating photos. To enjoy nature in all its glory, book private tours with smaller companies that offer similar experiences.

Account for weather disruptions
The South Island is especially susceptible to high winds and frequent rain, which can cause interruption of helicopter and boat tours. Be prepared for not everything going according to plan and if time permits, stay for a few extra days.

Sucheta Rawal is an Atlanta-based food and travel writer, author of Beato Goes To series of children’s books, and founder of the nonprofit Go Eat Give. Follow her on Instagram @SuchetaRawal