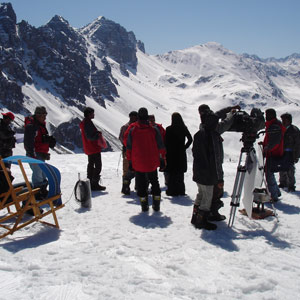 Song-and-dance routines are a beloved, signature feature of Bollywood films—but often, the glamorous foreign settings are just as important. Although the locations are only the background, moviegoers can gain much awareness about the country, its landscapes, architecture, culture, and attractions. The spectacular visuals could be a starting point, even a guide, for your next vacation.

As I walk on one of the highest hanging bridges in the world, making my way to get a good view of the surrounding glaciers, a cold gust hits my face. Even though I’m wearing a warm base layer and a down jacket, my body goes numb from the icy crisp of this summer morning. I think about the dozens of movies I have watched, in which a young damsel dressed in a pink chiffon sari dances with delight, singing love songs against the backdrop of these very glaciers!

I tug my wool hat down for more warmth.

For decades, we have marveled at Bollywood’s shots of famous landmarks, scenic locations, and unreal circumstances. Switzerland was one of the first international locations favored by Bollywood starting in the 1960s, and remains so to this day. The small country offers a diverse assortment of landscapes—from tranquil alpine lakes and rolling green hillsides, to snow covered mountain peaks and passes.


Indians are Switzerland’s fourth-largest tourist group from Asia; they account for around 85,000 overnight stays in Interlaken, an area known for its emerald-colored lakes, alpine meadows, and dense forests. Much of the credit goes to the late filmmaker, Yash Chopra. From the Alpenrausch Lake in the movie Chandni, the snow covered Alps in Darr, to Bern and Fribourg in Dilwale Dulhania Le Jayenge, audiences have been charmed by their favorite movie scenes, making Switzerland their preferred honeymoon destination.

In 2016, a statue of Yash Chopra was installed in the gardens of the Casino Kursaal in Interlaken. Fans of the filmmaker are often seen striking a pose with the statue.

In 2017, Switzerland Tourism appointed Bollywood star Ranveer Singh (seen in the recent hit Simmba) as the country’s travel ambassador, launching a series of branded videos showcasing his favorite locations and adventures around the country. The country has repositioned itself for millennial travelers craving unique experiences, says Ritu Sharma, deputy director of Switzerland Tourism.

I have to agree. My first trip to Switzerland in 2005 was largely influenced by what I had seen on the big screen. I visited the usual destinations: Zurich, Geneva, Interlaken. But on my recent trip as a seasoned traveler skipping big cities and touristy highlights, I wanted to experience the small towns and festivals of Switzerland. I attended the Fête des Vignerons in Vevey, a rare winemakers festival that takes place only every 20 years, and roamed the charming villages of St. Gallen, an area known to have textile trade relationships with India since before the Second World War.

Montreux, a beautiful city on Lake Geneva, is where I learned about the famous band, Queen, and one of the largest jazz festivals in the world. Then I traveled by the Golden Pass Line through the UNESCO World Heritage vineyards of Lavaux and the Jura mountains, to the Bernese Alps. It was my own version of the ‘Ranveer on Tour’ train that Ranveer inaugurated in honor of his contribution to the increasing popularity of Switzerland as a preferred destination for Indian tourists.

Tourism Boards understand the impact of Bollywood and work closely with local production studios to offer grants to films. Cine Tirol, a joint initiative by the State of Tirol and the Tirol Tourism Board, has promoted over 86 Indian film productions in the Austrian Alps. A Cine Tirol promoter, with knowledge of Tirolean locations, is established in Mumbai to be in direct contact with leading producers and directors across India. Beautiful sets, excellent infrastructure, and financial incentives attract Hindi and regional movie productions to Austria.


Tirol, also known as the Capital of the Alps, is a picturesque area known for the imperial architecture of Innsbruck and its Old Town Center, visually depicted in the recent release, Tiger Zinda Hai. The movie was filmed in alpine Praxmar and in Kühtai, the historic city center of Innsbruck, as well as in the Imperial Court Palace of Innsbruck.

Apart from the mountains surrounding Innsbruck, the main attractions in this region are the Golden Roof; the medieval historic quarter; Schloss Ambras—a Renaissance castle with its Chamber of Art and Curiosities; the Court Church with a Renaissance cenotaph—tomb of Emperor Maximilian I; the Bergisel ski jump designed by star architect Zaha Hadid; and the Swarovski Crystal Worlds (where the "Enni Soni" ​song in the movie Saaho was filmed).

Karin Seiler-Lall, Managing Director of Innsbruck Tourism, says that Bollywood films and TV productions play a key role in influencing the holiday decisions of many vacationers from India and its diaspora, with a visit to the film locations being a central motive for choosing a holiday in the Innsbruck region. According to Cine Tirol, overnight stays from the subcontinent increased by over 700% between 1998 and 2014.

During my recent visit to this winter wonderland also known as Tirollywood, I notice busloads of tourists from South Asia crafting their Instagram memories under the Crystal Cloud in the garden at Swarovski Crystal Worlds and shopping for souvenirs at the largest Swarovski shop in the world. Stops on the tour also include thermal spas at the Aqua Dome hotel, and the nearby Stubai Glacier, the largest glacier ski resort in the country.

The movie Bharat traces the history of post-independence India against the backdrop of the turquoise blue waters, ancient walled cities, and limestone fortresses of Malta. This small island country in the Mediterranean Sea, south of Sicily and north of Tripoli (in Algeria), has been recently gaining popularity with South Asian travelers, even though it has seen its share of stardom for decades. Malta was the location for Charas (1976) and Samraat (1982), both starring Dharmendra and Hema Malini, as well as recent blockbusters, Thugs of Hindostan starring Aamir Khan and Amitabh Bachchan, and Bharat with Salman Khan and Katrina Kaif.


Malta’s palm-tree fringed landscape, dotted with picturesque hilltop towns, peaceful seaports, and old fishing villages, looks much like the other various locations where the film Bharat was shot, including Abu Dhabi, Spain, Punjab, and Delhi. As I rode in a traditional fishing boat across Malta’s Grand Harbor, I could visualize dramatic scenes from the movies coming alive over Fort Ricasoli and the nearby Malta Film Studios.

Valletta, a UNESCO World Heritage site and the capital city of Malta, is one of the most popular attractions in the country, packed with museums, cathedrals, gardens, and cafes, where 500 years of history unfolds. Nearby, the islands of Comino and Gozo offer secluded beaches, blue lagoons, and dramatic cliff formations.

In December 2018, Malta hosted the first ever Malta India Film Festival backed by the Ministry for Tourism, and invited filmmakers from all over the world who have either Maltese or Indian elements in their films to build a creative bridge encouraging art, culture, and entertainment involving the two countries. Twenty-six films, including Indian pictures shot in Malta and local productions were screened, while Bollywood actors and producers walked the red carpet during the three-day event in Valletta. Thugs of Hindostan, a $20 million production partly shot in Malta, opened the festival, followed by Raazi and Sanju.

Though many scenes are overshadowed by glamorous dance numbers, Bollywood can offer much awareness about a country, its landscapes, architecture, culture, and attractions. Let the visuals guide you through your next vacation as you watch on screen and then visit in person.

Sucheta Rawal is an award-winning travel writer, author of the Beato Goes To ... series of books for children, and founder of the nonprofit organization Go Eat Give, which raises awareness of different cultures through food, travel, and community service. Follow her on Twitter @SuchetaRawal