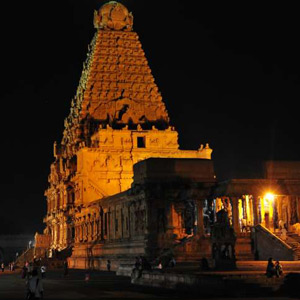 The towering Brihadeeshwara temple at night--built by the Cholas in 1010 AD, it is part of the UNESCO World Heritage site.

Tanjavur in southern India is where great dynasties ruled, left behind grand monuments to their grander visions, worshipped, sang, danced, and created enduring pieces of art. The region’s cultural history is rich—many important composers, writers, and musicians have thrived here in the last 2000 years.

Traversing across the Tanjavur district of Tamil Nadu, where the Cauvery’s munificence peaks before she ultimately joins the sea, one cannot help feeling that the gods descend here when they wish to picnic on earth. The temples of Tanjavur confound modern-day engineers with their sculptures and awe-inspiring architecture. And it all begins with Lord Ranganatha, at Srirangam.

On a beautiful winter morning in January, my journey began from Srirangam, the island nestling in the arms of two rivers—the Cauvery and its tributary, the Kollidam (or Coleroon). There was no escaping the promise of the ultimate spiritual experience, as I passed down the street to the temple. Every front yard was washed, and flamboyant kolams (rangoli), freshly drawn by the women of the house, danced on the doorsteps, indicating that another day of celebrating the glory of Ranganatha in a myriad ways had just begun. 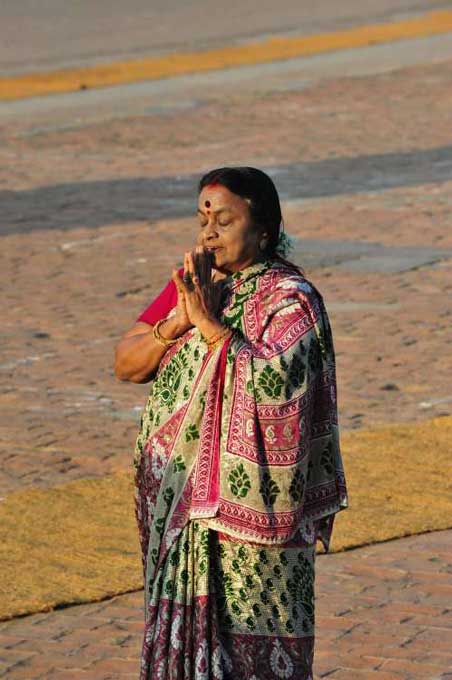 As the morning sun illuminates the temple, a devotee prays outside.

The winsome Cauvery, born in Talacauvery, hurtles, as rivers must, towards the sea, and to relieve the tedium of her journey, through the Western Ghats to the Bay of Bengal, engages in a genteel game of hide-and-seek with Lord Vishnu as Ranganatha. He frolics first with her at Srirangapattana as Adiranga, and as Madhyaranga in Shivanasamudram, and finally, at Srirangam, as Anthya Ranga, before he lets her join the sea.

Srirangam is the foremost of the eight self-manifested shrines (Swayam Vyakta Kshetras) of Lord Vishnu. It is also considered the most important of the 108 main Vishnu temples (Divyadesams). This temple is also known as Thiruvaranga Tirupati, Periyakoil, Bhoologa Vaikundam, and Bhogamandabam. In Vaishnava parlance the term “koil” signifies only this temple.

The temple is enormous in size, with a 156-acre complex. It has seven prakaras or enclosures. These enclosures are formed by thick and huge rampart walls that run around the sanctum. There are 21 magnificent towers in all prakaras, providing a unique sight to any visitor. The temple lies on an islet formed by the twin rivers Cauvery and Coleroon.

The Srirangam temple is set in seven rectangular walled enclosures. The seventh to the fourth outer enclosures contain streets, residences, and market areas. The religious zone begins from the fourth enclosure. The innermost first enclosure is the sanctum sanctorum of the presiding deity, the reclining Ranganatha Swamy. This is a recreation of Vaikunta, the abode of Lord Vishnu, which rests in the middle of the Ocean of Milk. 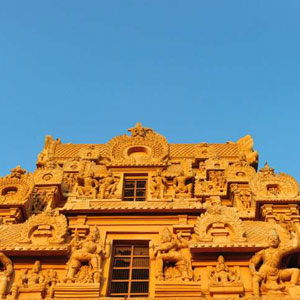 The entrance gopuram is a five-story 30-meter high structure.

Charming Srirangam casts its spell instantly, and its architecture celebrates a great kingdom and a civilization that is at least a couple of millennia old. With inscriptions, edicts, and local lore, the temple tells a story that begins with the reign of the Pallavas, who built a solid religious-cultural foundation by nurturing the great Aryan tradition in the Carnatic.

The next chapter brings the Cholas and their 300-year rule over the Coromandel Coast and most of eastern Deccan, marked by an equally passionate nurturing of the finest aspects of Hindu culture. The Pandyas of Madurai and the Hoysalas of Mysore, too, left their mark on Tanjavur’s architecture.

The backroads from Srirangam to Tanjavur take us through one such architectural marvel of the ancient kingdoms, the Grand Anicut (kallanai in Tamil). Built in the first BCE where two streams of Cauvery come together, this old functioning dam is a marvelous example of irrigation dams built as a legacy for generations. Kallanai, the snake-brick structure 1000 feet long and 60 feet wide, diverts the Cauvery into six canals that irrigate thousands of acres and form a rich delta. 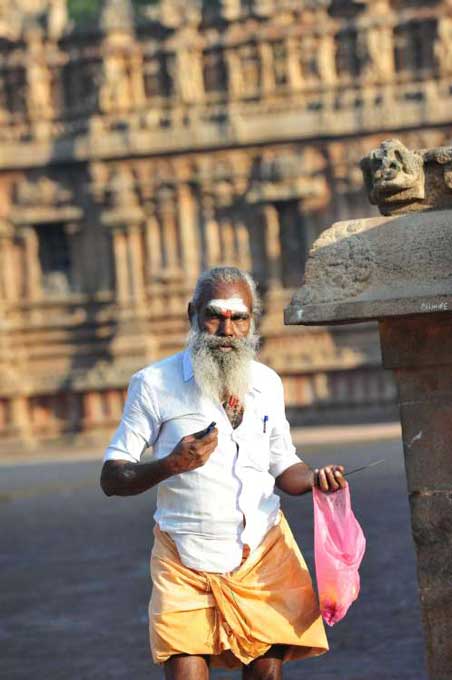 For the locals, the periya kovil (big temple) is a proud landmark and a site of religious identity.

Miles and miles of fields lush with harvest-ready paddy, and vegetation interspersed by coconut trees and a canal make for a picture-postcard scenery that demands stopovers at every bend. As men and women cultivate the fields, fresh water flowing into the fields soaks the vegetation, making it glisten vibrantly. My driver, Krishna, a native Tanjavurian, tells me the fields were sown in August and would be ready for harvest in the next couple of weeks.

They say the name Tanjavur came from “Tanjan,” an asura believed to have been killed at this spot by Lord Vishnu. It could also have been, originally, “Tan-sei-oor,” or a place surrounded by rivers and filled with green paddy fields. And we will never know whether it was the place that gave asylum (tanjam) to the Chola king Karikalan, who shifted his capital from Poompuhar after it was flooded by the sea.

But we do know it is a very welcoming city. Unlike in other places, auto rickshaw drivers do not swarm around you as you emerge from the railway station, or make any predatory overtures to make a quick buck off you. Taxi drivers watch a while and politely let you approach them instead of hounding you into picking them.

The town’s junctions are always abuzz with the business of the daily life of Tanjavurians, but tree-lined and well-laid pathways encourage you to walk along the streets soaking up the flavors and aromas of a smorgasbord of cultures across the millennia.

As sunset approaches, the “Big Temple” beckons. Built in 1010 AD by Raja Raja Chola, the building of the Brihadeeswara Temple marked the 275th day of his 25th year of reign, when Raja Raja Chola (985-1014 AD) presented the gold-plated kalasam for the final consecration of the Vimana, the 59.82-meter tower over the sanctum sanctorum.

My guide, Ramamurthy from the Archeological Survey of India, said this UNESCO Heritage monument is the only one to also be a functioning temple, where pooja is performed every day. 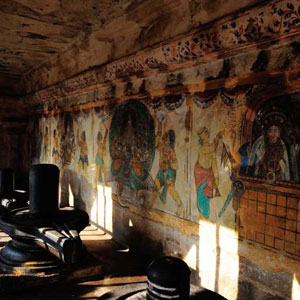 The temple has had influences from diverse kingdoms. During the Maratha rule, a total of 108 lingas were installed inside the complex, brought from different temples around Tanjavur.

Pointing out the majestic statue of Ganesha and the massive dwarapalakas (entry guards), Ramamurthy provided finer details of what made the Chola king such a great patron of the arts: “The king employed 150 musicians, 430 dancing girls, and more than 600 staff. These details are etched in inscriptions on the walls of the temples.” The 216-foot gopuram is the largest in the world, built from granite without using lime and mortar. Atop the tower above the main temple is a capstone that weighs 80 tons. The stone was delivered to the top of the tower using elephants via a ramp that starts 3 miles to the west, which in itself is an astounding engineering feat.

A large courtyard 250 meters by 85 meters surrounds the great temple. On the inner side of the walls are long, pillared corridors with murals, Shivalingas, and Nandis. Later rulers added several of the statues and murals. The temple also sports a depiction, in stone, of 81 of the 108 karanas of Bharata Muni’s Natya Sastra, setting the pace for many others to follow in succeeding centuries. A temple of such stupendous proportions had never been attempted before anywhere else in the country. In height, elegance, and simplicity of design and plan, the temple has few parallels even in the modern era. 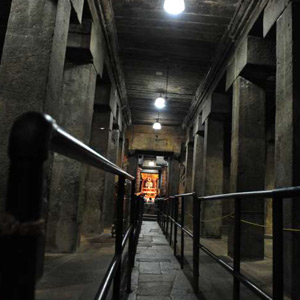 Besides the Great Brihadeeswara Temple, the town is well known for its brassware, silk saris, and most important, the rich Tanjore paintings. Krishna and I crisscrossed inner roads and small alleyways, and found weavers spinning on looms at home, with the whole family chipping in. Buying silk is a tradition in itself, I’m told. It is not like going into a shop and picking up a piece of fabric. Most of it is sold from the courtyards of old homes. You sit with the weaver, pick your colors and the patterns to be woven into the borders or side drape (pallu), and then he weaves. Families order these saris on special occasions, to be worn at weddings or festivals. Don’t worry, they ship to your address with guaranteed delivery.

Tanjavur is one of the chief political, literary, and religious centers of southern India, known for its contribution to Carnatic music and Bharatanatyam. It is now the second most important place for the annual Natyanjali Dance Festival after Chidambaram. 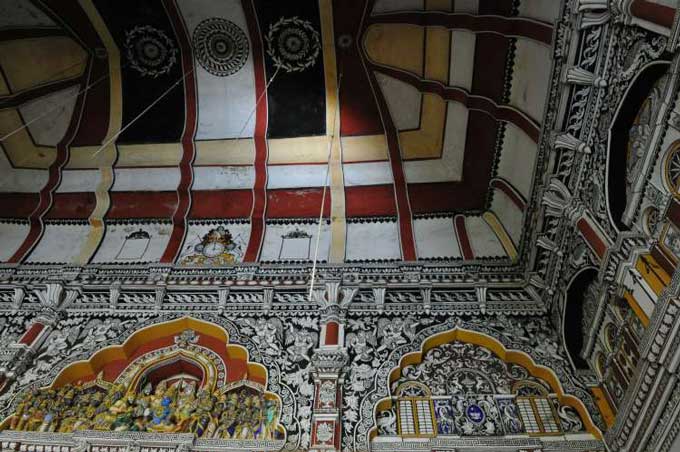 Interior of the Tanjore Maratha Palace. The Tanjore Palace was built around 1550 by the Nayaks, and later added by the Marathas. This stucco art was commissioned during the rule of Raja Serfoji (1797 to 1832).

Tiruvaiyaru, close to Tanjavur, is already thrice hallowed by its links to the trinity of Carnatic composers who lived there as contemporaries—Tyagaraja, Muthuswamy Dikshitar, and Shyama Shastri.

Here in Tiruvaiyaru, every year in the Tamil month of Thai (which begins in the second half of January) the Tyagaraja Aradhana is held, attracting musicians from all over the country.

Among other attractions of the city is the Tanjavur Palace built around the 16th century, which is home to a priceless collection of old Tanjore paintings. It also has a Music Hall and the Saraswati Mahal library that stores more than 10,000 ancient manuscripts, many inscribed on palm leaf. Curiously enough, I also found a Danish church that was added on by a later Maratha ruler. 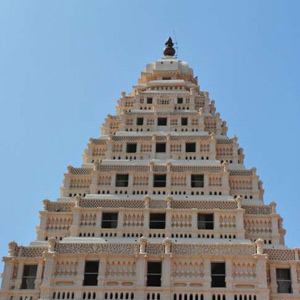 The tower of the main palace, 190 feet high with eight stories, is called the Goodagopuram.


Darasuram
The beauty of Tanjavur district extends beyond the city and its immediate surroundings, in the cluster of incredible temples located at easily motorable distances. Another important temple town—Kumbakonam—is just an hour’s drive away. A dusty, winding 3-mile road from Kumbakonam leads you to the temple of Darasuram. This is one of the three great living temples of the Cholas. Dedicated to Airavatheshwara, the white elephant that worshipped Lord Shiva, this temple is swathed in a sheath of serenity. In comparision to Tanjavur, Darasuram is all in miniature-fashion. The carvings here are exquisite narrations of social life in a village, dance poses of artistes, and stories from the Puranas. 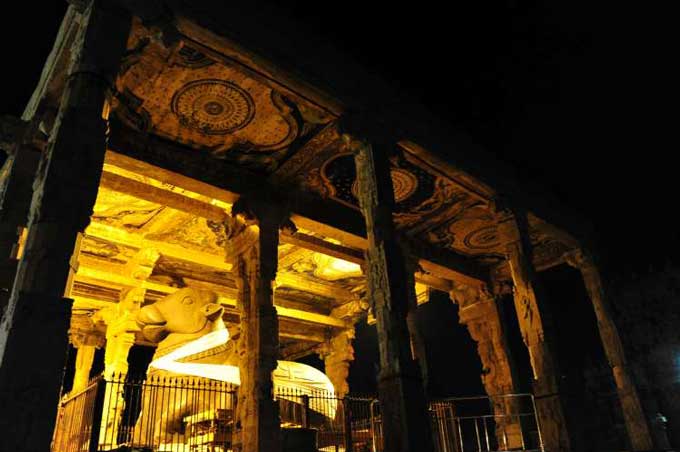 This massive Nandi stands at the portal of the Brihadeeswara temple. It is the second largest monolithic Nandi in the country. The main temple is in the center of the quadrangle with a sanctuary, a Nandi, a pillared hall, an assembly hall (mandapa), and many sub-shrines.

While the temple is designed in the form of a chariot, the inner sanctum is small, and its outer wall is lined with small bulls carved from rocks. The mantapa of the temple, the prayer hall, has 108 exquisitely carved pillars, each showcasing a Bharatanatyam pose.

Traversing across Tanjavur can be enriching and uplifting, culturally as well as spiritually. Even merely watching from the windows of your vehicle can open up vistas of unimagined grandeur. To walk where great kings once ruled, scholars expounded magnificent philosophical ideas and refined a religion and cultural tradition, to experience life as it was lived 2000 years ago, and to know our ancestors had worked out solutions to many problems that dog us today and elegantly managed issues such as food security, diplomacy, and global geopolitics while still appreciating and celebrate the finer aspects of life, is to learn what we can still make of ourselves.

Accommodations to suit all categories of tourists are available in the hotels, dharmasalas, and lodges of Tanjavur. The Sangam group and the Tamil Nadu Tourism Development Corporation have well-maintained hotels in the district.