COVID-19  In-depth info for Indians in Atlanta/Georgia. Click here
Home > Magazine > Features > Tribute: All the World Was His Stage

Tribute: All the World Was His Stage 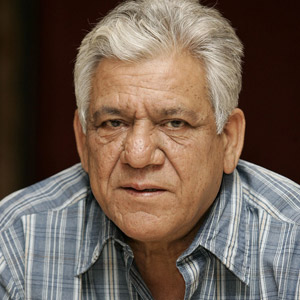 OM PURI was one of the rare few who have been revered in Indian cinema for their sheer acting prowess. He could lend authenticity to just about any character he was tasked to portray. With his peerless depiction of raw human anguish in Aakrosh to his naughty madcap comedy in Jaane Bhi Do Yaaron, here was an actor who could draw you to a movie simply on account of him being in it. Internationally, he has held his own with the best in Hollywood. He has starred with: Patrick Swayze (City of Joy), Michael Douglas (The Ghost and the Darkness), Jack Nicholson (Wolf), Helen Mirren (The Hundred-Foot Journey), and many more.

Shabana Azmi echoed every cinema lover’s sentiment when she said of her friend and costar of 14 movies, “Om Puri! You have left us all too early!” The immensely talented Puri was 66 when he succumbed to a massive heart attack at his residence on January 9 this year, leaving his colleagues and fans distraught. Puri seems to have had a premonition of his death, as he stated during an interview just two weeks before, “My contribution as an actor will be visible once I leave this world and the young generation, especially film students, will watch my films.” 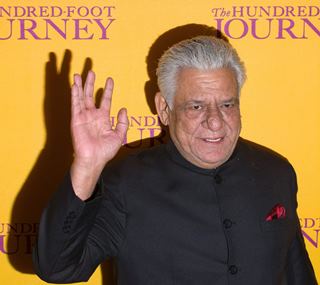 For over four decades, Puri was one of cinema’s— not just Indian cinema’s—finest actors, who left his mark in every film that he did. He was one of the few Indian actors to cross over to the West before the likes of Irrfan Khan and Priyanka Chopra made the jump. The consummate ease with which he straddled the disparate worlds of Parallel Cinema, Bollywood, Hollywood, and British films, truly made him an international star.

Om Puri’s greatness stems from the fact that he made it to the top league despite being, on the face of it, one of the most unlikely persons to grace the silver screen. He was not conventionally good-looking and it became difficult for directors to slot him as, self-confessedly, he neither looked like a villain nor a comedian, certainly not a hero! But this so-called shortcoming worked wonderfully well in his favor as he could become just about anyone, so effortlessly did he blend into his onscreen persona. And he played plenty of them in his illustrious career.

It was Govind Nihalani’s Aakrosh in which Puri let his silence speak volumes, which catapulted him to the pantheon of the ‘Greats’ of Hindi cinema. It was a searing portrayal of an oppressed tribal wrongly accused of murdering his wife, and that cry of anguish that the actor let out in the last scene, wrenched the heart of every person in the audience. He went on to give many more memorable performances in films like Ardh Satya (his marvellously nuanced cop act earned him his first National Award), Dharavi, Aarohan, and Mirch Masala, to name just a few. He was equally at home in hardcore commercial films like Don 2, Ghayal, Dabangg, and Singh is Kinng. He was recently seen in a cameo in Kabir Khan’s Bajrangi Bhaijaan. Puri showed that in a world of make-believe, he could make everything look real and sans artifice. In a way, his off-screen personality spilled over into his onscreen character. He will be last seen in Kabir Khan’s Salman Khan-starrer Tubelight which will be released in June this year. 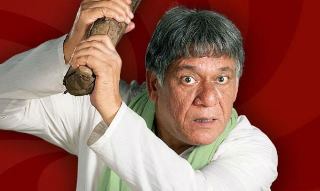 That’s not all. The versatile actor tickled our funny bone, too, in cult comedies like Jaane Bhi Do Yaaro—he stole the show here with his hilarious Mahabharat act—and Hera Pheri. He made a big impact on the small screen also, in serials like Kakkaji Kahin and Tamas. As his colleague and close friend, Naseeruddin Shah once said, “The story of Om Puri is in fact every struggling actor’s fantasy: that a thoroughly ordinary guy can get ahead with nothing but good talent as godfather, hard work as insurance, and the best of intentions as guide.” 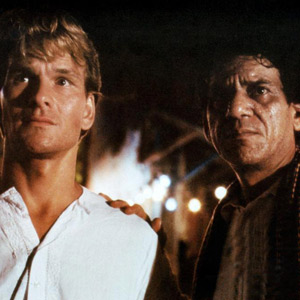 His international credentials started with a small but intense role in Richard Attenborough’s Gandhi (1982). But it was Patrick Swayze-starrer City of Joy (1992) (left) that drew him international notice.

Puri’s international career actually took off in 1982 when he featured in a small role in the Oscar-winning film Gandhi, and it wasn’t long before the West took notice of him. Rolland Joffe gave him his first “big break” in Hollywood in his film City of Joy alongside Patrick Swayze. He played a rickshaw puller and needless to say, he delivered a phenomenal performance. Speaking about the role later in an interview, Puri revealed while chuckling, that once while rehearsing, he stopped at a roadside tea stall where two elderly men were sitting. They asked him if he was Om Puri, to which he said, “Yes.” As he was leaving, he heard one of the men tell the other, “Poor Om Puri, what a fine actor he used to be. And imagine he’s pulling a rickshaw now. He must have fallen on very hard days!” 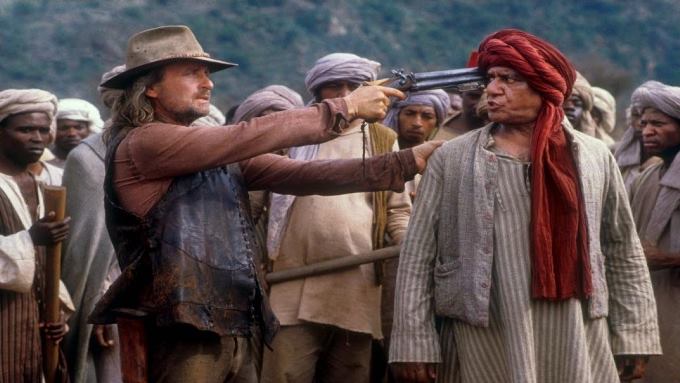 With Michael Douglas in The Ghost and the Darkness (1996).

Charlie Wilson’s War, the Tom Hanks-Julia Roberts starrer, which talked about the secret dealings of the Texas Congressman Charlie Wilson in Afghanistan and how he helps the people there in their fight against Soviets, saw Puri portray the role of Pakistani President Zia-ul-Haq. He also starred alongside Jack Nicholson in the romantic horror film Wolf (1994) and played Abdullah in the historical adventure The Ghost and the Darkness (1996) alongside Val Kilmer and Michael Douglas. 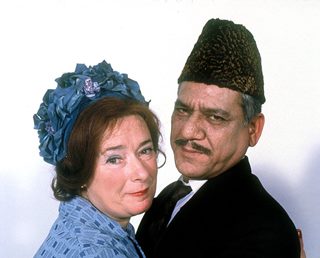 (Left) With Linda Bassett in British comedy East Is East (1999).

Hollywood was just the beginning. Britain beckoned him next. Who can forget his portrayal of a stern Pakistani father in the comedy-drama East Is East (he later reprised his role as George Khan in the 2010 sequel West Is West) and that of Parvez, the bewildered father of a son who becomes an Islamic extremist in My Son the Fanatic! In fact, they fetched him the honorary Order of the British Empire in 2004. Before this, he had been honored in India with the Padma Shri in 1990. 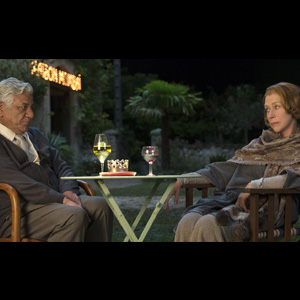 (Right) With Helen Mirren in The Hundred-Foot Journey (2014).

In 2014, Puri starred with British actress Helen Mirren in the comedy The Hundred-Foot Journey as Papa Kadam, the patriarch of a family of Indian immigrants who open a restaurant in a French town. Said a deeply saddened Helen, on hearing of Puri’s sudden demise, “He was such a great, expansive, life force of a man, he instantly became a great friend. He was a generous, life-loving man. My profession will miss an original, and India will miss a great representative.” He also appeared in Indo-Canadian filmmaker Deepa Mehta’s directorial debut Sam & Me.

Gurinder Chadha who directed him recently in the English film Viceroy’s House (one of Puri’s last films not released yet), remembers the actor as “one of the most talented and versatile actors of his generation…he showed in his characters how similar we all are—how human and imperfect—and in so doing changed the way we think about race and representation. He put a human face on a label and showed we all want the best for our children and families.” 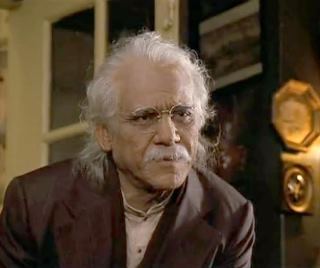 Ironically, while he had a glorious film journey, Puri’s personal life was far from perfect. In 2013, he separated from his second wife Nandita, and the court granted him only visitation rights to their son, Ishaan. All this took a toll on his physical and mental health. In fact, says Shah, “I know that Om was really suffering during the last few years. And there was no way out of it. Though his death was sudden, I can’t say it was totally unexpected. In a way, death has relieved him of all the stress.” Well, we certainly hope he is resting in peace now. 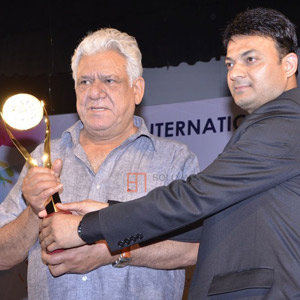 Kamal Haasan, who directed him in the comedy Chachi 420, said it all when he bid adieu to Puri: “So long Omji. Prided myself on being his friend, peer, & admirer. Who dare say my Om Puri is no more? He lives through his work.”

Gitanjali Chak is a film buff, a journalist, and longtime host of Khabar’s Bollywood column.