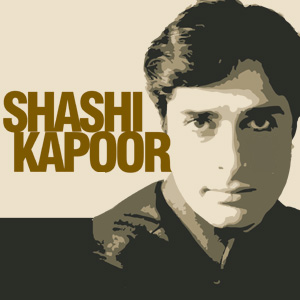 He was so good-looking, heroines on movie sets found him distracting and heroes found him daunting. Amitabh Bachchan openly wondered what chance he had beside this Kapoor scion with charmingly crooked teeth, twinkling eyes, and cultured, princely manners. He was considered so drop-dead handsome, that after his death, some of his colleagues refused to see what remained of him: a body frail and uncared-for, a face ravaged by the unkind hands of age. 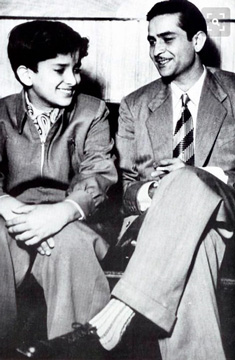 As a young boy, with his elder brother Raj Kapoor (right).

Shashi Kapoor, born Balbir Raj, was one of the most underrated contributors to Indian cinema. For a man who was often perceived as being overly casual about his movie career, Shashi was fairly decisive on things that mattered to him. At six, he knew showbiz was his calling. At 18, he decided to marry Jennifer Kendal, a British-born theater artist, and did so within two years, despite his future father-in-law’s misgivings and his family’s grudging acceptance. He firmly decided he wanted to be an actor not a star, unruffled by offers to play character roles; at 18, he played Jennifer’s father in a play. Even at his peak, he found unselfish joy in essaying minor-league parts while ceding the lead to other heroes in such classics as Kaala Patthar, Trishul, Krodhi, Shaan, Namak Halaal, and Kabhi Kabhie. At 25, he made a decision to deviate from Hindi potboilers and work concurrently in English productions. 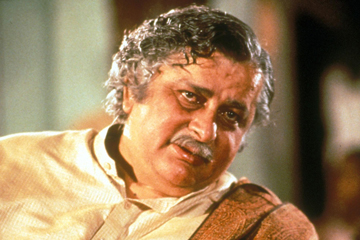 (Left) In In Custody, another Ismail Merchant production, 1994.

This was the start of his remarkable relationship with Ismail Merchant of the famous Merchant Ivory Productions. Arguably India’s first successful crossover artiste, Shashi Kapoor acted in a number of English films including The Householder, In Custody, Shakespeare Wallah, and Heat and Dust. Not only did these movies pay well and allow him expression of an alternate voice, they gave him a good friend in Ismail Merchant, with whom he created a body of work that was ahead of its times, now called parallel cinema. These English films challenged him as an actor in ways that, sadly, Hindi moviemakers could not. 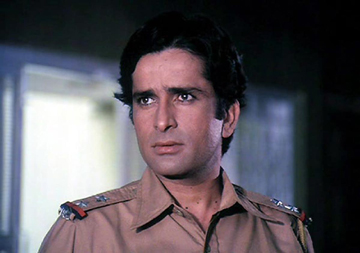 (Left) Perhaps his most famous role was in the blockbuster hit, Deewaar, 1975.

The most-quoted Shashi Kapoor moment in Indian cinema is the “Mere paas maa hai” scene under the bridge in Deewaar. For me, there’s yet another scene toward the end of the movie that hits hard. When Shashi’s character (Ravi, a police officer) is torn between quitting his assignment and arresting his brother, he chances upon a school teacher played by veteran actor A. K. Hangal. Shashi comes to apologize to Hangal for shooting his young son, an act he realizes was an overreaction to a boy stealing bread for his starved family. Although Hangal’s moralistic lines leave us moist-eyed, for me, it is Shashi’s silent, minimalist body language that brings home the point. He makes up his mind at that point to capture and imprison his brother. “Such a lesson,” he tells Hangal gently, “could have only come from a teacher’s home.” 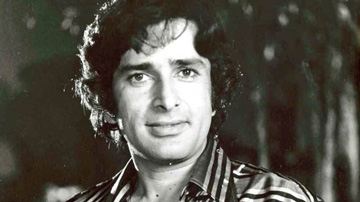 (Left) His magnetic good looks were just the icing on the cake.

Shashi Kapoor’s strength was his power of underplaying his roles. Although his characters were often bubbly and carefree, his dialogue delivery was restrained and devoid of theatrics, letting the twinkle in his eyes and wry smile do the talking. Evidently, Shashi relished the less flashy slices of life. Enjoying relaxed lunches with Jennifer Kendal at Mathura Dairy Farm, an ordinary dhaba, feasting on puri bhaji that cost four annas a plate. Choosing chai at roadside tea stalls in an earthen cup over being pampered in a multistarred hotel. Picking up vanity cases and luggage for his female costars at the airport. Chatting with gatekeepers and technicians and waiters: Tarakeshwarnath Tiwari, a security guard for more than 50 years at Prithvi Theatre, referred to Shashi Kapoor as the nicest and the humblest sahab he had met. “I would wait to watch him get off the car because he had this royal way of doing it,” said Tiwari. “He was a true king.”

The man’s simplicity was reflected in his antipathy to media glare, unlike his two glitzy brothers. “He came across as a kind man on screen,” said lyricist Javed Akhtar, “because he was the same in real life.” In 1986, Shashi Kapoor beseeched the Maharashtra Chief Minister and the housing board to help actress Shabana Azmi win her battle for slum dwellers in Colaba when no one else in the industry showed any concern. When she got to the podium to thank her supporters, Shashi Kapoor disappeared down a quiet alley. Glory for him was in the cause, not the applause. 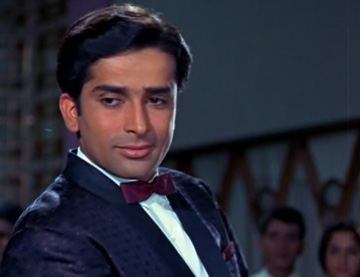 Shashi Kapoor, the star, the actor, and the person all leave a legacy and a void that will be hard to fill in the film fraternity of India.

Shashi Kapoor was a person everyone seemed to love, for he was a good man. He would ask his actresses to stay for longer shoots so that the junior artistes could get paid more for extra shifts. In 1983, when Ramesh Sharma admitted he had only Rs. 25 lakhs to make New Delhi Times, Shashi charged him Rs. 101 as signing amount. And just Rs. 1 lakh for the entire movie, which was incidentally what Shashi received from B. R. Chopra for Waqt in 1965. Although New Delhi Times, written by Gulzar, stumbled at the box office, Shashi Kapoor won the National Award for best actor. When Amitabh Bachchan was a struggling actor, he sought a 500-rupee role in a Merchant Ivory production as one of the pallbearers who carries the body of Shashi Kapoor’s character. When Shashi, who had become Amitabh’s friend, noticed him in the crowd of mourners, he berated him for taking up such “bit parts.” Later on, Shashi would ask Ismail Merchant to delete Amitabh’s sections. As time rolled by, fates quickly changed. Today, history talks disproportionately less about Shashi, more about Amitabh. But they remained friends forever.

Shashi Kapoor was not satisfied with merely keeping the Kapoor legacy alive; he wanted to pad it with more layers. This he did, thanks to an immense love for theater. In 1944, his father Prithviraj Kapoor—Papaji—founded Prithvi Theatre, a traveling drama troupe. As a child, Shashi was smitten with everything his father did; now, he fell in love with Prithvi Theatre because he understood and shared his father’s vision for Indian drama. He toured with the company, playing assistant stage manager, selling tickets, taking up roles big and small, and interacting with junior artistes. In 1960, Shashi was saddened: the troupe was shut down and beloved Papaji became increasingly unwell. His father’s dream of restoring its old glory by building a permanent theater in Mumbai did not materialize in his lifetime.

In 1978, six years after Papaji died, Shashi Kapoor and Jennifer resurrected that dream. Today, Prithvi Theatre, located in Juhu, Mumbai, is flourishing with new talent, staging more than 500 shows a year. For Shashi Kapoor, theater was a way of giving back to his father, an ode to Papaji for enriching his childhood.

Shashi’s passion for theater also brought him his wife, Jennifer. During a Prithvi Theatre play, he peeked through the side curtains and spotted an attractive foreigner sitting in the audience. Must be Russian, he thought. After Raj Kapoor’s Awaara became a hit, he was getting used to the rush of Russian visitors. After some investigating and help from relatives, he discovered that the woman was part of an English traveling theater company, Shakespeareana. When Shashi, who had never had a girlfriend, was finally introduced to Jennifer, she barely looked up from her soup. Perhaps because of his indomitable grin and relentless charm, Jennifer and Shashi started meeting frequently. After many months, she would confess that she initially thought Shashi was gay. It was not common in the West for men to throw their arms around other men in a casual manner. 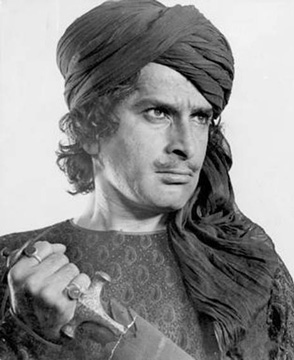 The star’s love for his wife was undying, yet uncompromisingly private. Shashi never revealed any personal details, especially after her death in 1984. It was Jennifer he credited for sustaining his balance between family and work, for keeping theater alive in him. For motivating him to produce meaningful movies like Junoon, Kalyug, and 36 Chowringhee Lane. For sending him salad and oranges and yogurt so he wouldn’t inflate like his siblings. When Jennifer fell victim to cancer, in a way, so did Shashi. The man lost his sense of purpose, his anchor in life, and slipped into an unseen mode of long, deep grieving. Shashi went to Goa and, according to his son Kunal, took his boat to the middle of the sea and for the first time sobbed his heart out, perhaps rudderless now.

When praise finally started pouring in for Jennifer’s acting skills, Shashi felt it was a little too late. He noted that Jennifer should have been given the National Award for 36 Chowringhee Lane for her tremendous portrayal of an Anglo-Indian teacher, Violet Stoneham. The movie was rejected on technical grounds because it was not exclusively in an Indian language. Ironically, it was also disallowed by Academy Awards as an entry from India because the dialogues were predominantly in English, and not in a foreign language. This movie marked the directorial debut of Aparna Sen who met Shashi Kapoor with her script in a section of his apartment dubbed by Jennifer as the “chamcha room,” a place where the actor humored his fans and flatterers. Shashi loved the narration and immediately agreed to produce the film. Although 36 Chowringhee Lane was a commercial disaster, it was critically acclaimed, and Shashi Kapoor was so pleased with the product that he adoringly started calling Aparna Sen “Coppola,” after the famous Hollywood film director Francis Coppola. Aparna went on to win the National Award for best director. 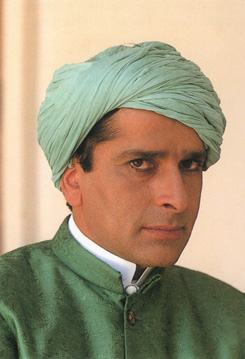 Despite his commercial success, Kapoor gravitated more toward art cinema, leading him to work well with the famous Ismail Merchant. He is seen (Left) in Merchant’s Heat and Dust, 1983.

When he was honored with the Padma Bhushan in 2011 and the Dada Saheb Phalke Award in 2015, awards meant little to him, a man with waning health. During recent interviews, when asked about his most memorable movies, Shashi Kapoor didn’t bring up his mainstream hits like Aa Gale Lag Jaa, Deewaar, Sharmeelee, or Satyam Shivam Sundaram; he mentioned films like Junoon, The Householder, Heat and Dust, and 36 Chowringhee Lane, even though all of them had incurred heavy losses at the box office. It may be that on some level, these movies connected him to good cinema, to his Papaji, transporting him to his theater roots. 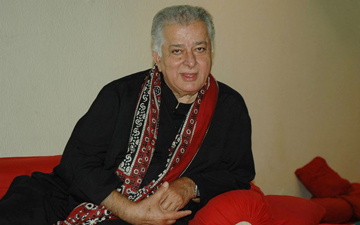 During his last days, Aparna Sen visited an ailing Shashi Kapoor who had, over the years, suffered a stroke, was paralyzed on one side, and had endured a heart attack. “This is your Coppola,” she whispered, but he didn’t remember her. Even when she mentioned her name, Shashi barely stirred. Finally, she told him she was his 36 Chowringhee Lane director. That’s when, wrote Aparna with palpable sadness, she noticed a flicker of recognition on the man’s frail face. Maybe there was good reason why many of Shashi Kapoor’s well-wishers couldn’t bring themselves to visit the weakened man, the man who had shunned the limelight and lost himself to vodka and overindulgence, whose once ravishing looks and dignity made people weak at the knees. They would rather stow away in their memory the suave Shashi, the kindhearted gentleman who worked extended hours just so that side artistes could earn a little more.

Ajay Vishwanathan lives in a world of words and viruses. He has an obsession for one, shows appreciation for the other. A virologist with the Centers for Disease Control & Prevention, he is also a widely published fiction author.