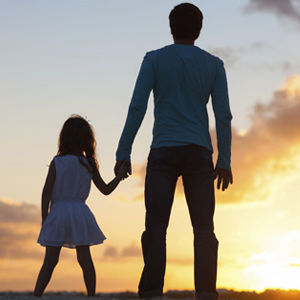 The treacherous shadows of adolescence inevitably darken our sunlit memories of childhood. A subtle distancing from a parent who once played a near magical role in one’s life is inevitable in the painful process of discovering oneself. In this touching, slice-of-life reminiscence, the author recounts the grey heartache of adolescent disillusionment and what it took for her to come out of the shadows.

It was eleven months ago that I first truly feared for my father’s life.

It was during Atlanta’s infamous “Snow-pocalypse.” My dad, a diabetic, was on his way home from work but had been sitting in his car for the better part of eight hours. As the words “hypoglycemia” and “sugar spike” rang through the house like funeral tolls, I stood quite still, staring out of the window into the dark, icy night.

My father might die. I struggled to wrap the idea around the montage of images flashing through my mind’s eye. The warmth of his arm around me at a performance by the Atlanta Symphony Orchestra. The smooth rumble of his voice as we tore through classics like Green Eggs and Ham and The Scarlet Pimpernel. The scratch of the blanket on our legs as we watched A Few Good Men, our Friday-night movie of the week.

In the beginning, my father and I were partners in crime, happily raiding the family CD collection in search of new pieces of classical music, or unearthing new literary treasures at the public library. With my father, the air was filled with music, with the melodious tones of laughter and the constant rhythms of speech. Silence didn’t exist between us. We were the best of friends.

But as I entered adolescence, the music gradually faded into deafening black silence. Slowly, silence loomed between us like a wall at the dinner table, during walks in the park, at symphony performances; and this seeming lack of harmony left me bitter and confused. The deathly quiet was broken only by the clang of metal on metal as I angrily fought to discover the reason for his silence. I didn’t understand why my father didn’t talk to me anymore. There seemed to be no reason why his deep baritone did not accompany my high soprano. But mostly, my father’s distancing reminded me of my elementary school days, of eating lunch alone and walking solo laps around the soccer field at recess. I wanted my dad to represent strength, assertiveness, everything I believed an adult to be. I wanted him to fight my battles and teach me how to navigate difficult times. I wanted him to fit my idea of adulthood, and I interpreted his relative silence as an inability to do so.

I watched the snow fall, its whiteness lightening neither the darkness outside my window nor in my heart. Once a soft white powder that glowed with promises of cancelled school and endless fun, this snow was harsher, more glaring, more reminiscent of danger and misery than of delight. Distantly, I became aware of my mother asking me if she should walk the four miles to my father’s car with food. I couldn’t answer her.

Unlike me, my mother had a solution for her problem. She had thought of an escape because she believed in one. I was still struggling with the idea that there may not be a solution to my problem. There may not be a way to reconnect with my father before the music stopped completely.

For with the prospect of his permanent absence staring me in the face, I recognized the fool I had been to believe that my father didn’t love me, that my father didn’t care. My father’s love was present in every camera lens through which he watched me perform. My father’s love laced every word he read aloud to me in every novel we uncovered. My father’s love was the foundation of every irritating inquiry into my wellbeing when I was away from home. At the age of fourteen, I wasn’t mature enough to understand that. My father had spent so much time with me when I was a young child, but my growing up left him uncertain as to how to interact with me. I focused so much on the changes to myself and my own personality that I didn’t stop to think that those changes might be affecting my relationships as well. My father’s love was silent, but his silence was as musical as his speech; and I needed a certain level of maturity to properly appreciate the beauty of these melodies, the subtleties of these rhythms. I needed a certain level of maturity to realize that actions speak louder than words.

When my mother’s cell phone rang, I jumped and hastily turned from the window. My father’s reassuringly deep voice traveled across time and space to inform me that he had pulled over at a gas station for food and water. In a voice as unstable as my legs, I thanked God and told my father that I loved him. And I was shaken by the realization that love is not all about hugs and kisses and presents on your birthday. Love is not about laughter and fun and never-ending chatter. Sometimes, the most important type of love is the quiet kind, the kind that doesn’t dress in gaudy shades of red and pink. The kind that applauds you even during your voice practice. The kind that willingly drives an hour to your competition in the freezing cold. The kind that sits up late into the night, bent over your physics book, explaining the same concept over and over again. And with that realization came a new value for the simple gift of love.

In my father’s silences and soft voice I saw a strength of character that I admire and strive to emulate. Through his lack of intervention in my battles, I discovered an innate ability to stand up for myself—an ability that, without my father’s inaction, may never have surfaced. My father taught me that learning the meaning of true love is part of becoming an adult, and that sometimes, silence can be more musical than sound. Adulthood is valuing the quiet parts of life and love over the loud, obnoxious moments, recognizing that actions speak louder than words. Adulthood is appreciating the elusive beauty of silence over the blatant twang of the audible. Every day, my father shows me the true meaning of adulthood. And I will always strive to copy his definition in my own dictionary of life.

Ramya Prabhakar is a senior at Roswell High School in Roswell, Georgia.