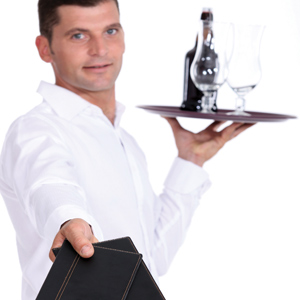 For many Indian diners, being ignorant of the restaurant business in the U.S. plays a big role in how they tip, NEIL JACOB realized when he began working as a waiter. He hopes to help change that.

This summer, I started working at a diner as a waiter.

I learned a lot of new things about the food service industry—such as how hectic the business is, and how slow Mondays can be after the weekend rush. On one of those slow Monday afternoons, a fellow waiter and I were talking when a group of people came in.

His disgruntled sigh confused me. A table of six businessmen usually means a big tip in the waiting business, so I zipped over to the table before he could change his mind. I brought out all the food and chatted with the men for a little while. They asked about me, and I said my ​amma was from Bangalore. A couple of them were from there as well. I talked to them for a good 10-15 minutes, and we had our share of smiles and laughs. This made me feel even better because I don’t have the best sense of humor—and to make a customer laugh is like getting my ​appa to watch a whole movie without sleeping. After a couple of refills and some cheese cake, they were ready for the check.

Opening a waiter’s checkbook (or “bill presenter”) is like opening presents at Christmastime—except that all the presents are cash! But this time, I was disheartened. It was an 8 percent tip on a $60 bill. Through my time at working at the diner, I had only gotten a tip one other time at 10 percent or below. I went to look for the men to ask what I had done wrong, but the hostess said they had just left. I shook it off and decided to cast it as an outlier. A couple of hours later, I got stuck with being the closer, which sucks most of the time. You have to serve until the end of lunchtime by yourself for an additional three hours from 2 to 5 pm and put away plates, clean up, and do other chores before you can leave. Moreover, you may get three to five groups of stragglers who want a late lunch or an early dinner.

At 3 pm, a family of four Indians walked in. They reminded me of my family of four. I served them—and when I opened the checkbook, the tip was 10 percent! At this point I was baffled. I went to my manager and asked why I had gotten tips of 10 percent or less, today of all days. Had I gotten moody customers? Did I have some spinach in my teeth?

“What was the race of the people you served?” he asked. When he heard my response, he bluntly said, “Yeah, Indians aren’t the best tippers.”

Later, Amma said something that made a lot of sense. Indians might not tip well, she explained, because many hadn’t worked in the food service industry in America. So they didn’t know how it worked.

In this industry, waiters are paid little to no hourly salary and get most of their earnings from tips. Besides, the little hourly salary that we are paid ($2.13 an hour in my case) goes to taxes. So tips are very important. Most of Amma’s friends didn’t know how waiters were paid. Once they found out, everyone—including my parents, of course—began giving cash tips of 20 percent or more.

Now, I believe I can get my manager to say, “Indians are the best tippers ever. Let me wait on your table!”

Neil Jacob is a sophomore at the University of Georgia, Athens.