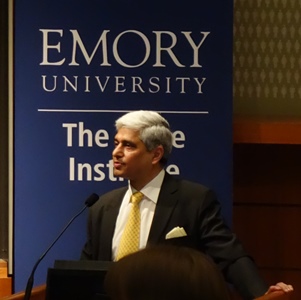 (Left) Vikas Swarup, author of the book on which the movie Slumdog Millionaire was based, spoke with energy and humor at Emory’s India Week 2015. (Photo: Suzanne Sen)

India Week at Emory University is the successor to Emory’s previous India Summits. This year’s offerings (March 16-20, 2015) began with information for students on opportunities in India, but the rest of the week was open to the public. 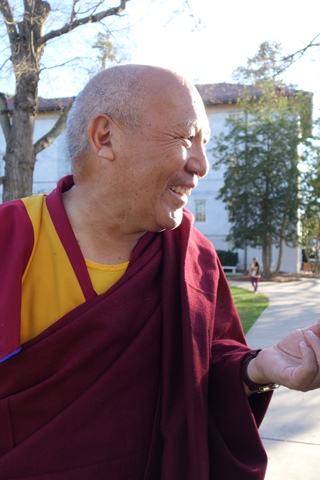 Geshe Lhakdor, director of the Library of Tibetan Works and Archives in Dharamsala, India, on the quad at Emory University after his India Week lecture. (Photo: Suzanne Sen)

Although the following week (March 23-28) was Tibet Week, focusing on culture, politics, religion, and science, some overlap was seen as Geshe Lhakdor, director of the Library of Tibetan Works and Archives in Dharamsala, India, spoke on “Secular Ethics: an India Inspired Model for the Dalai Lama’s Universal Ethics” on March 16. He spoke on leading an ethical life to achieve happiness and peace, and using long-lasting peace and happiness as a yardstick to judge one’s activities. Living in accord with nature and doing no harm is akin to following the Golden Rule. Mental outlook is within your control; a cool mind is needed to cultivate positive qualities; vipassana brings insight, bhavana brings positive thinking. Finally, we enter the world wanting only love and affection, so helping others is basic. Since Buddha was Indian, and India is one of the most diverse countries in religious traditions, it is good to “improve your soft power more than your outdated hard power,” he said, and promote Sanatana Dharma for harmony of all faiths together.

A South Asian Arts Mela showcased dance and a capella groups on the 17th.

A faculty panel “Expanding Your Research to India” on the 18th included with Rama Rao Amara, K.M. Venkat Narayan, Raman Parimala, and Holli Semetko describing research collaborations in India, including how they selected their partners, the benefits of their partnerships, and advice to others on begin- ning or expanding projects in India (see video link below).

One of the key events was a lecture by Professor Jagdish N. Sheth, Charles H. Kellstadt Professor of Marketing, Emory University on March 19, titled “Make in India: will India make it?”

Philip Wainwright, vice provost for global strategy and initiatives, first noted the importance of India to Emory: Indian students in this year’s first year class for the first time are the 2nd largest group; overall Indian students are the 3rd largest group at Emory; and the largest number of faculty name India as the #1 country they are engaged with above all others.

He then introduced Dr. Sheth, saying that it is a privilege to have Dr. Sheth on the faculty of the School of Business, for “the kind and supportive man I have the privilege to work with is a superstar,” author of numerous articles and books on important and timely topics, and recipient of some of the highest awards in his field.

A transformation, like that made after India’s independence to invest in engineering and medicine to take India from agricultural to industrial while using the benefits of the system left by Britain, led to India’s having world class students, and now this manufact- uring transformation can be of a magnitude of 100 times more. The US did it under Lincoln, China did it 30-40 years ago, and now it is time for India. 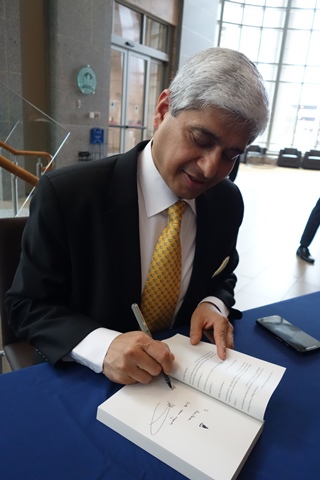 Computerization is a key to reduce corruption and speed progress, e.g. Visa on Arrival. Sheth presented a 10-point plan (see video link on our website). One benefit of digital technology is that manufacturing can be put anywhere: he gave an example of receiving an excited phone call from a great executive Vinita Bali, former VP of Coke in Atlanta, who returned to India to head Britannia Industries and discovered that the rural-urban divide was being transformed by digital technology. India missed its opportunity twice before; Sheth outlines what sectors to focus on now (see video link below).

Diplomat and author Vikas Swarup signing his book at Emory University after the screening of Slumdog Millionaire. (Photo: Suzanne Sen)

On March 20, best-selling author Vikas Swarup, whose 2005 novel Q&A was the basis for the Academy Award-winning film Slumdog Millionaire, gave a lively conversation on his creative process before a screening of the film. A book signing and reception ended this grand finale to the week (see the article here, and video link here).

“Why 'Make in India' Makes Sense”
Prime Minister Narendra Modi's recently announced 'Make in India' initiative seeks to strengthen India's economy by supporting its manufacturing sector. The campaign focuses on creating jobs and attracting investments from corporations worldwide. In this talk, part of Emory University’s India Week, marketing professor Jagdish Sheth discusses the benefits of the initiative and how it can provide India with an alternative to global sourcing from China while modernizing the country’s supply chain.
March 19, 2015, Published on Apr 6, 2015
https://www.youtube.com/watch?v=lXsCHFL9Y6c