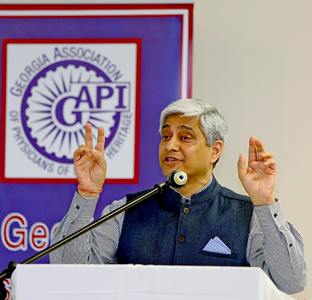 Book lovers and movie fans as well have definitely heard of Vikas Swarup, author of the book Q & A (2005) on which the movie Slumdog Millionaire—which took home eight Oscars—was based. The book itself has been translated into over forty languages. Swarup’s “day job” as Joint Secretary of the Ministry of External Affairs of India as well as author had led to his invitation to speak at Emory University on March 20, 2015 during India Week, and the Indian-American community was honored that he also accepted invitations to meet them—he can only accept 2-3 out of 25-30 invitations, he later said. He spoke to full houses, one at an IPN (Indian Professionals Network) networking dinner at Ashiana Banquet Hall in Global Mall on March 19 and again for a special dinner reception with GAPI (Georgia Association of Physicians of Indian Heritage) in association with IACA (India America Cultural Association) and Third Eye Dancers on March 21 at Ashiana. Khabar’s exclusive interview with Swarup is in this issue. 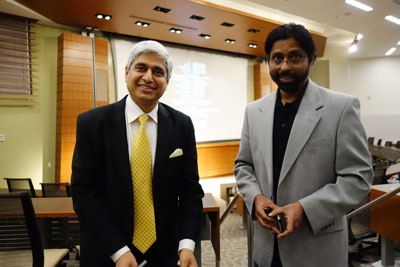 As the credits to Slumdog Millionaire roll on the screen behind them, author Vikas Swarup chats with Atlanta filmmaker Parthiban Shanmuggam at Emory University. (Photo: Suzanne Sen)

Energy and humor connected him to the audience as spoke at Emory. On one hand, his 29 years as a diplomat prove him to be diplomatic, but his ten years as a writer show that he “tells it without pulling any punches”: his basic message is humility and hope.

Never having the urge to become a writer, he simply took the challenge, using two months while his wife and children were in India. Inspiration came from something offbeat: an army major on a quiz show had cheated; Swarup tied his story to India with another inspiration from the 1999 project Hole in the Wall where NIITers set up a computer for slum kids—with no training, the kids did wonders—proving to Swarup that 1) we create our own luck, and 2) he who strives wins. This theme differs from that of the movie, which emphasizes destiny rather than luck or effort, but Swarup’s attitude towards the movie is distanced, as in one’s daughter’s marriage: her name changes, the film becomes the son-in-law, and “you never speak ill of your son-in-law.” Neither book nor movie trivialize nor degrade the dynamic passion of the slum kids; not the essence of India, it is an engrossing slice of life. His third novel, The Accidental Apprentice (2013) has a similar theme: “you get what you negotiate, not what you deserve.”

Tips for writers: Empathy is what a writer needs, he says. “I have not lived in a slum, nor so far murdered someone” (his 2008 second novel being a murder mystery). His three Cs are curiosity (“what if” as the beginning of fiction), confidence (that what you’re creating has worth), and the computer (research for authentic backdrop). Local conditions also kickstart creativity: the serenity of Japan helped him write one of his books. Clear your horizon for 7-8 hours of uninterrupted time, as solitude is needed for your created world. He enjoys being a part-time writer, since he doesn’t have to follow the market but can write what he wants.

To the question, “How do you know when your work is finished? (one of the most interesting questions, he commented), he said that he begins with the end, a surprise for the reader, and works backwards. Having 10-15% in his head, the rest emerges as he writes, characters developing, switching emphasis, becoming people and talking to you. Writers block is a character telling you that there is a problem, you’ve taken a wrong turn.

Whereas a movie is more incidental, he said, a novel can have numerous subplots: “a good book is better than a movie,” that’s why many good films are based on good books. To encourage children to read, let them read stories that are not dull; he is pleased that Q & A has been used to teach English to students. 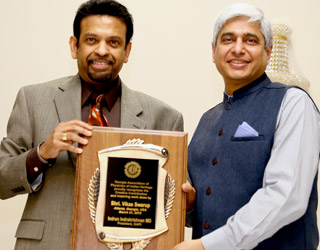 Swarup concluded his presentation at GAPI with Atlanta’s first official announcement of the name of incoming Consul General, Nagesh Singh. Swarup asked Atlantans to “please give your support and affection, work in harmony. The people in the consulate are receptive and have been told, in fact, to keep an open house.”