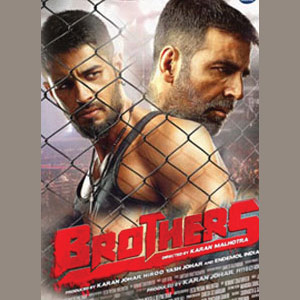 After Bajrangi Bhaijaan, here comes another movie that leaves you choked more than once. How can it not, it is designed to! It is clear that the director does not believe in the power of subtlety. So you have an ear-splitting background score throughout the movie to help guide you through the emotions.

An official remake of the Hollywood film Warriors, Brothers is about two estranged siblings (half-brothers actually)––David (Akshay Kumar) and Monty Fernandes (Sidharth Malhotra). The final act of the film has the two men competing in a high profile mixed martial arts tournament where years of pent up anger lead to an expectedly cathartic climax.

An undeniable asset of the film is the thrilling freestyle fight sequences. The punches and blows feel real and the look of pain on the actors’ faces seems authentic. As far as performances go, Brothers is Akshay Kumar’s triumph. He pitches in a refreshingly soft and restrained act, letting his intense silences do most of the talking. Sidharth Malhotra, though severely lacking in facial expressions, also does manage to bring a quiet intensity to his part of the brooding tough guy.

Shefali Shah as their mother is, as usual, terrific in a cameo, while Jacqueline Fernandez as David’s wife Jenny, is earnest but erratic. Jackie Shroff as the father Gary Fernandes, though a bit over the top, suits the role of an alcoholic. It’s nice to see Kiran Kumar and the very talented Ashutosh Rana after a hiatus.

5. Nachan Farrate (All is Well)