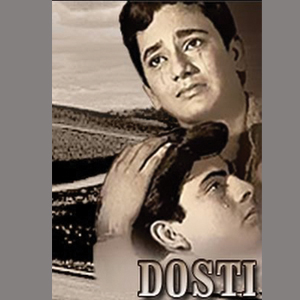 This heartwarming musical released in 1964 was one of the biggest surprise hits of the sixties. The friendship between two boys, one unable to see and the other on crutches, touched a chord in the hearts of the audiences, turning the relatively unknown leading actors, Sudhir Kumar and Sushil Kumar, into overnight stars. The film won six awards out of the seven nominations that it received at the 12th Filmfare Awards in 1965.
A remake of the Bengali film Lalu Bhulu, Dosti tells the poignant story of the visually-impaired Mohan (Sudhir Kumar) and Ramu (Sushil Kumar), who is unable to walk. Fate brings them together and their friendship is tested through the many trials and tribulations that they are destined to go through. Baby Farida, who acted as little Manjula in the film, grew up to do many mother and grandmother roles.
One of the biggest assets of Dosti was its music composed by Laxmikant-Pyarelal duo. The star here was undoubtedly Mohammad Rafi who mesmerized the entire country with his spectacular rendition of five of the film’s six songs. The sixth was sung by Lata Mangeshkar. Songs like Chahunga main tujhe and Raahi manwa dukh ki chinta were also greatly enriched by Majrooh Sultanpuri’s soulful lyrics about friendship and love. Incidentally, the legendary RD Burman’s harmonica skills were the highlights of some of the songs.
Dosti was also recognized for its great humanism and progressive theme at the 4th Moscow International Film Festival held in 1965. You can watch Dosti at youtube.com/watch?v=vGHVfSIy2bU 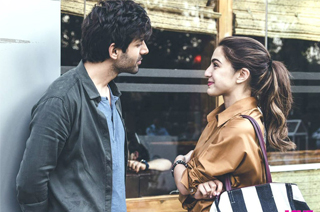 10. Bhoot-Part One: The Haunted Ship