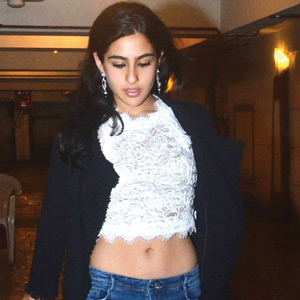 Speculation is rife that Sara Ali Khan is all set to make her big Bollywood debut opposite none other than Hrithik Roshan, in a comedy-drama to be produced by Karan Johar and directed by Karan Malhotra of Agneepath fame. It is being said that Kareena Kapoor is grooming her stepdaughter for her big break.

The 24-year-old daughter of Saif Ali Khan and Amrita Singh recently graduated from Columbia University in New York. She has also been in the news for her rumored boyfriends. The latest buzz is that she is dating Shahid Kapur’s younger brother, Ishaan Khattar. The pretty girl was earlier said to be in a relationship with a politician’s grandson, Veer Pahariya.