Deck the Halls with Boughs of ... Mango! 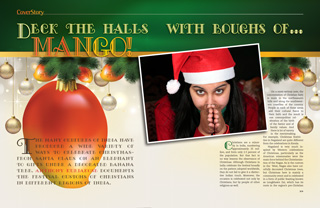 Christians are a minority in India, numbering approximately 25 million, and form only 2.3 percent of the population. But that fact in no way lessens the observance of Christmas. Although Christians in India celebrate the festival broadly on the pattern adopted worldwide, they do not fail to give it a distinctive Indian touch. Moreover, the occasion is celebrated not only by Christians, but by people of other religions as well.

On a more serious note, the concentration of Christian faith is more in the northeastern hills and along the southwestern coastline of the country. People in each of these areas add their cultural flavor to their faith and the result is one cosmopolitan celebration of the birth of the Savior and of family values. And there is lot of variety in the merrymaking. For example, Christmas festivities in Nagaland are quite different from the celebrations in Kerala.

Nagaland is very much inspired by Western celebrations of Christmas, particularly as the American missionaries were the main force behind the Christianization of the Nagas. As is the custom in the West, Nagas also have colorfully decorated Christmas trees, but Christmas here is mainly a community event and is celebrated in a form of public feasting known as Lengkhawn Zai, which has its roots in the region’s pre-Christian society. Although the state boasts of several native tribes who follow different social rituals and traditional customs, their Christmas celebrations are almost the same. 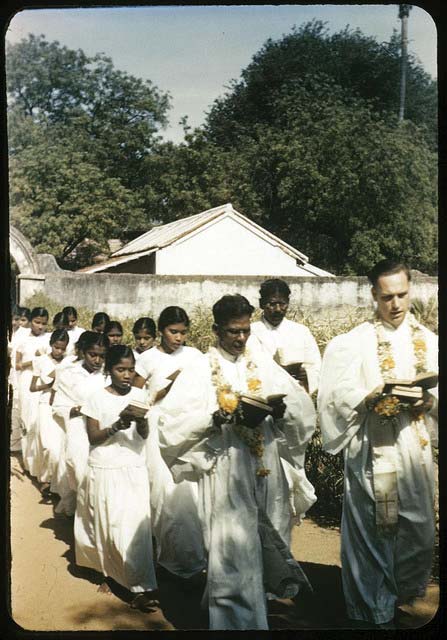 The Christian communities in Kerala, which have a legacy of a few centuries, incorporate kolattam (stick dance), dramas and skits, harikathas (Hindu phrase for the telling of God’s stories) and songs on the birth and life of Jesus as an integral part of the celebrations. They are staged, recited or sung through the night. Local sweets like athirasam and achappam are equally popular with doughnuts and plum cakes. With the Christian Church in India taking to Indian symbols in recent years, a lot of Kerala Christians use small clay oil-burning lamps as decorations, like Diwali diyas. These small clay lamps are placed on the edges of flat roofs and on the tops of walls. Generally Kerala Christians use mango or banana tree as Christmas trees. Some of them also decorate their houses with mango leaves. For most in Kerala, going to church to attend the service at midnight is extremely special.

Journalist Anne Mascarenhas remembers her school days, dressing up in her finery late at night, walking to church with her family, getting back at around 3 a.m, cutting the cake, sharing the distinctive Kerala wine made of lime and grape and exchanging gifts in the wee hours of the morning. 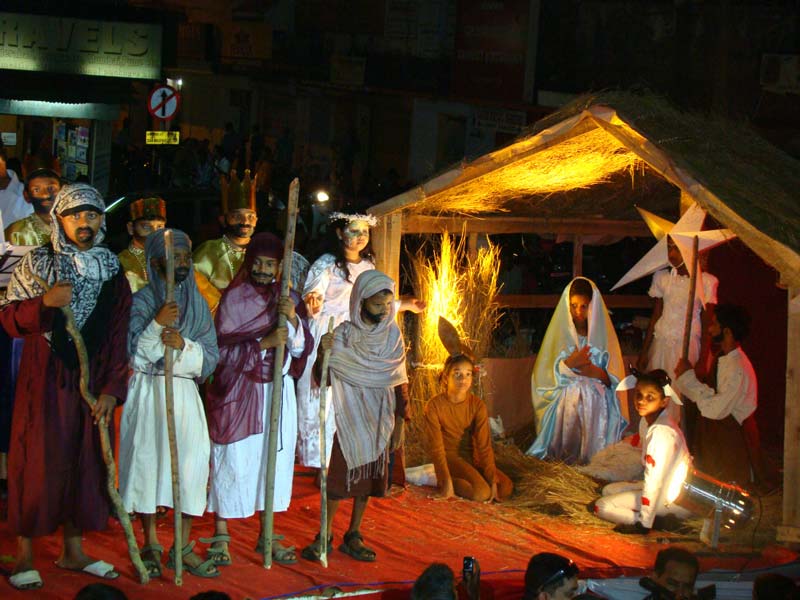 The Tamil and Kannada Christians take up some of the Hindu customs like drawing the kolam or rangoli as a symbol of religious reverence. Crib making is an important part of their celebrations, bringing out the best in terms of artistic value and creativity, re-enacting the birth of Christ. “We make all the Christmas delicacies like sannas, kalkal, ghee rice, idlis cooked in coconut milk and dry grapes,” says Ananda Thomas, a Kannada Christian.

Among the Konkani families living predominantly in the coastal belt of South India, sharing of kuswar (an assortment of delicacies) with neighbors is an important part of Christmas gaiety. Kuswar is comprised of several snacks including the popular chaklis and kodubales, rose cookies, diamond cuts, nevrios, kidios and gulios, the last two being special Konkani favorites. Plum cakes are specially prepared for the occasion and in many traditional homes orange peel and various fruits are soaked in rum, months in advance, to ensure a special flavor for the Christmas cake.

Rosamma Thomas, a government officer, recalls that during her childhood an entire room in the house was kept aside for the storing of sannas (the Konkani equivalent of idlis, but with a decidedly distinct flavor). Sanna and maas (mutton stew), coupled with ghee/coconut rice and pork and chicken side dishes, were part of the festive lunch on Christmas day—a far cry from the standard biryani fare that has become the norm in most Christian families today.

Revelry in Goa
But it is in Goa, the tourist capital of India, that you find the maximum éclat in the celebration of Christmas. Sorp0tel, one of the oldest curry forms prepared in Goa, is an integral part of Christmas cuisine. Made from pork meat and liver, its spicy taste reflects the richness of Goan food along with pork vindaloo, a tangy dish that becomes a part of the main course. The best way to eat this dish is with plain boiled or jeera rice. Bebinca, a famous Goan dessert, takes a long time to be made, but the outcome of patience is amazingly delicious.

Cathedrals and churches design the crib, ready to bring home the Savior. Almost every home glows with the light of the Christmas star. With over a hundred churches, it is Goa that will give you the real feeling of Christmas. For the Anglo-Indian community Christmas is still tinged with an old-world charm and marked by many enduring traditions inherited from Britain, to which the Anglo-Indians have added their own color. Christmas Eve in an Anglo-Indian household is marked with a custom known as the concata (prounounced consata), which is of Portuguese origin. This consists of sending beautifully decorated trays laden with special goodies to near and dear ones. The goodies include the traditional Anglo-Indian Christmas sweets such as kalkals, made of maida flour, eggs, and coated with sugar, and “matrimony,” made with cashew nuts, coconut, and sugar. The Anglo-Indian associations often have an X’mas Ball where the community gathers for shared festivities. 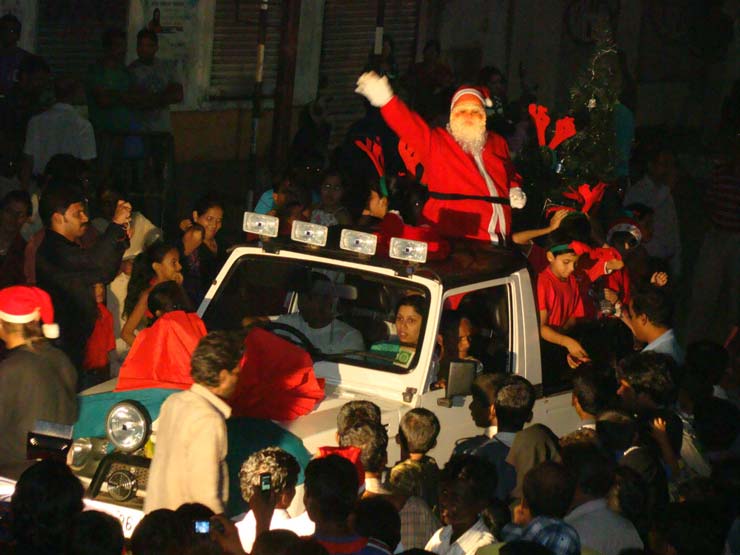 As in the outside world, in India, Father Christmas or Santa Claus is held to be the giver of presents, but apart from the traditional reindeer, he often comes home on an elephant too! The popular local name for him is Christmas Chacha (Uncle Christmas in Hindi) or Christmas Thatha (Grandpa Christmas in Tamil). Nativity plays are staged in many Christian schools and churches on Christmas night.

For all Indian Christians, especially the Catholics, the midnight mass on Christmas night is very important. The mass over, everyone relishes a mouthwatering feast of various delicacies, mostly consisting of cakes. Thereupon, presents are given to one another and “Merry Christmas” is wished. In Hindi and Urdu, Happy/Merry Christmas is “Bade Din ki Mubarak”; in Sanskrit it is “Krismasasya shubhkaamnaa”; in Bengali, “Barodiner shubhechha janai”; in Tamil it’s “Christhu Jayanthi Nalvaalthukal,” and in Konkani, it’s “Khushal Borit Natala.” Yes… India has wishes in all her languages for her Christian sons and daughters!

A Jesuit priest at Akbar’s court described, in early 1580, Akbar’s reaction to two paintings of Mary: “On entering he was surprised and astonished and made a deep obeisance to the picture of Our Lady that was there, …as well as to another beautifully executed representation of Our Lady brought by Fr. Martin da Silva from Rome, which pleased him no end, and then he left to praise them to his captains who waited outside. He was so taken up that he came in again with a few of his intimates and his chief painter and other painters, of which he has many excellent ones, and they were all wonderstruck and said that there could be no better painting nor better artists than those who had painted the said pictures.”

Another contemporary Jesuit account of an event in the March of 1582 provides similar types of details, as well as some complex and distinctive senses:
“…a certain noble, a relation of the King, secretly asked the officer in charge of the royal furniture for the beautiful picture of the Virgin which belonged to the King, and placed it (unknown to the King himself) on a bracket in the wall of the royal balcony at the side of the audience chamber, where the King was wont to sit and show himself to the people and to give audience to those who desired it. The aforementioned noble surrounded and draped the picture with the most beautiful hangings of cloth and gold and embroidered linen. For he thought this would please the King. Nor was he mistaken: for the King warmly praised the idea, which also gave great pleasure to the priests, who perceived that non-Christians were worshipping and reverencing the picture, and—as if compelled by the unaided force of the truth—were not denying veneration to the image of her whom the morning stars extol, and whose beauty amazes the Sun and Moon….”

After this, Akbar ordered his artists to paint hundreds of iconic portraits of Jesus, Mary, and a panoply of Christian saints in the styles of the European Renaissance to adorn books, albums, jewelry and even treaties. These images were used in court rituals and major royal festivities such as coronations. The dramatic culmination came when imperial throne rooms, harems, tombs and gardens were prominently adorned with mural paintings of Christian figures. Astounded and delighted, European travelers wrote home declaring that the Muslim regime was on the verge of conversion. They could not have been more wrong.

Far from capitulating to Western cultural superiority, the Mughals had taken European material culture and put it to work for themselves. The Mughal art specialist Bailey goes on to note that such indigenized paintings and murals were “intended only for a select group of elites who gained entrance to the Hall of Public Audiences” and not to “offend the religious sensibilities of the general public of the Mughal Empire by being displayed in public.” 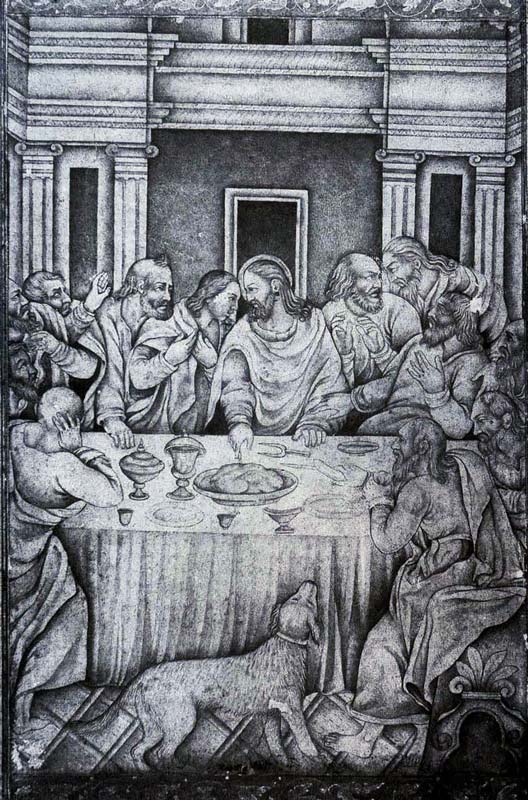 A Mughal miniature of the Last Supper.

There is a Mughal miniature painting of the Last Supper. This painting shows some rudimentary similarity in the poses of the figures to the famous original version in Europe. However, it is obvious that the artists were given verbal details of the original, which they tried to reproduce using their own imagination, applying the features they were familiar with. There is some attempt to reproduce the European architecture, and the presence of the dog is an addition.

As one scholar notes, “they interpreted missionary art on their own terms and used images of Christian saints and angels to proclaim a message based on Islamic, Sufi, and Hindu symbolism and linked with Persian poetic metaphor. …Far from being alien to Indo-Islamic culture, these figures carried a rich range of associations for their Mughal audience and communicated messages related to moral leadership, divine guidance, and royal genealogy. It naturally follows that Mughal artists encoded the same meaning into portraits of these holy figures.”

Mughal paintings done in the early 1620s show Jahangir, Akbar’s son, seated in court with a portrait of Mary on the wall above. Unlike Akbar who had a religious streak in him, making him even establish a short-lived religion known as “Din-i-Ilahi,” Jahangir prized the sacred pictures which the Fathers gave him, not, as they fondly imagined, out of veneration for the subjects represented, but because he had a passion for works of art and curios of all kinds, and especially for pictures, of which he was not only an enthusiastic collector, but a very competent judge.

After Jahangir, his successor Shah Jahan did not evince much interest in depicting Christian themes in Mughal miniatures and with his son Emperor Aurangzeb, a fanatical Muslim, the very idea was an anathema.

[With inputs from the authors of Inter-Cultural Encounter in Mughal Miniatures, and the Christian Art section of the Victoria & Albert Museum, London, U.K.]